Despite a slight decrease in fatal accidents in recent years, Japan's forestry industry remains by far its most dangerous working environment.

Compounding the problem for workers, most of the industry's generally small enterprises lack insurance, making it hard to secure adequate compensation for mishaps. 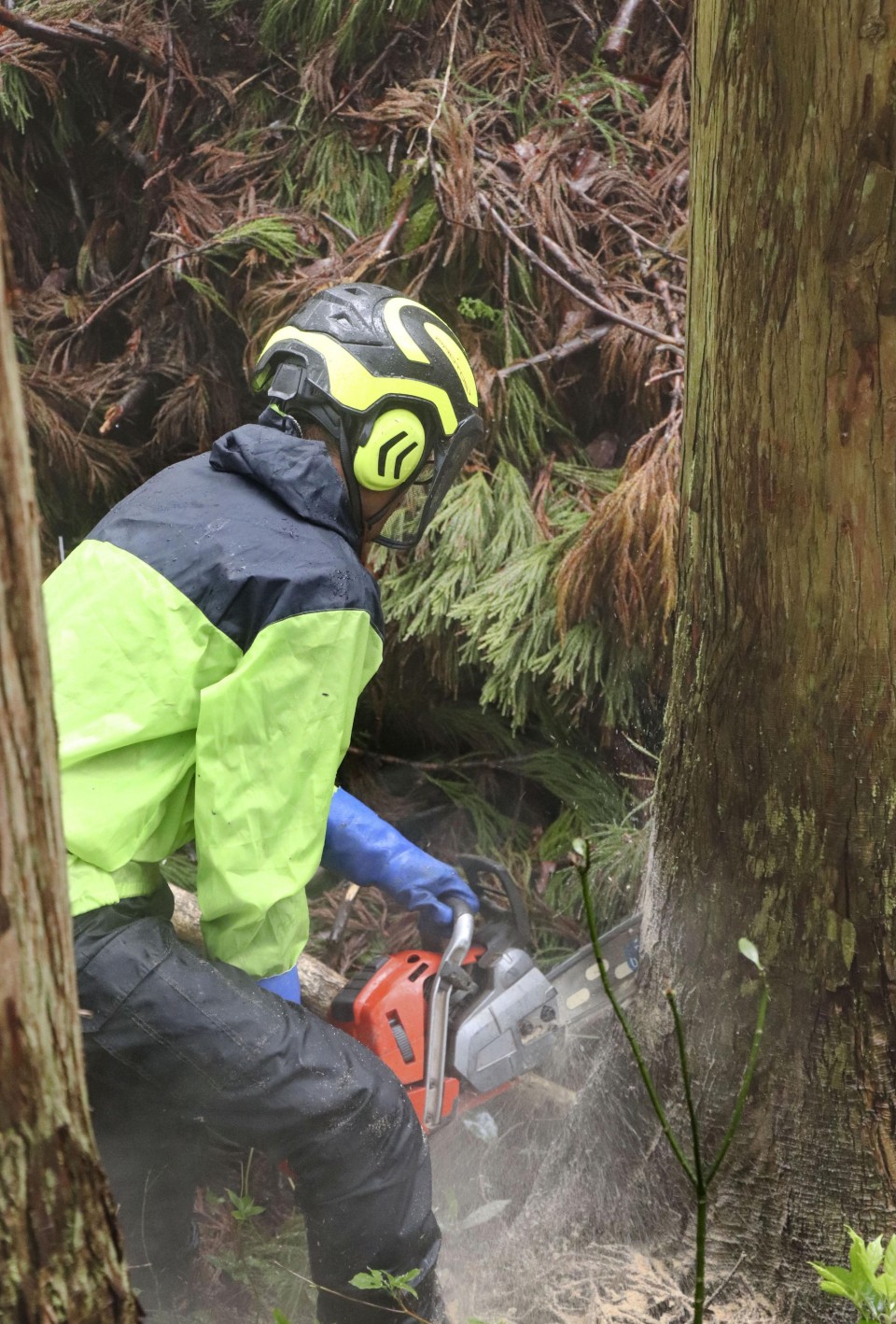 Photo shows a worker cutting down a tree while being mindful of safety in Tottori on April 26, 2019. (Kyodo)

Bereaved families of victims are calling for an overhaul of the industry's lax safety management and turning to the courts for relief.

In March, the Tottori District Court ordered a forestry company to pay 27 million yen ($254,000) in damages for the death of an employee in an accident caused by a fallen tree five years ago. The lawsuit was filed by the mother of Atsushi Inada, a resident of Tottori who was 28 years old when the accident occurred.

While the death was recognized as an accident at work, making the bereaved eligible for compensation, the company was not covered by insurance, according to the mother's lawyer.

In Japan, compulsory insurance is not applicable to small companies, such as those in the forestry industry which do not hire a worker on a regular basis or the annual number of temporary contracts is 300 or fewer. Since such small-scale enterprises are also usually unable to afford insurance voluntarily, most are left without cover.

In the lawsuit, the mother argued that the company had not provided enough safety education to employees. The president of the company, however, claimed Inada was responsible for his own death.

"Standing close to a person cutting down a tree is suicidal behavior," he stated.

But the court acknowledged the employer's negligence for failure to establish an appropriate working area.

The Forestry Agency, for its part, maintains that it cannot force forestry companies to take out voluntary insurance, though it encourages them to do so.

Yukimi Maeta, head of the forest owners' co-operative association in the western prefecture, said most of its member companies simply don't have the money to buy insurance.

Accidents at work are on the decline in the forestry industry, according to the agency and the Ministry of Health, Labor and Welfare.

But the number of casualties per 1,000 workers stood at 20.8 in 2019, nearly 10 times the all-industry average and 4.6 times as many as in the construction industry, which in many cases involves work at high elevations.

In addition, there are about 10 deaths of foresters per year not recognized as industrial accidents as they work for themselves.

Local governments hold seminars or conventions on safety in the forestry industry to help it address its lax safety measures. But participation in them has not been widespread enough to raise awareness of safety sufficiently.

In July, a forester was killed in Miyakonojo, Miyazaki Prefecture, when he was hit by a tree that bounced after being felled. The accident reportedly could have been avoided if proper precautions, such as evacuating workers before the tree came down, had been taken.

"Down-to-earth education must continue until foresters become aware of safety as professionals throughout the forestry industry," said Fukuju Yamamoto, who is raising awareness and organizing hands-on programs about the issue in Chizu, Tottori Prefecture.

In addition to thorough safety measures, a compensation system should be established to "enable bereaved families, including small children, to live free from anxiety," Inada's mother said.