A powerful typhoon came closer to Japan's southwestern main island Sunday and continued to move northward, engulfing nearly all of the Kyushu region in a storm zone and prompting local authorities to urge more than 8 million people to evacuate across a wide area of the country. 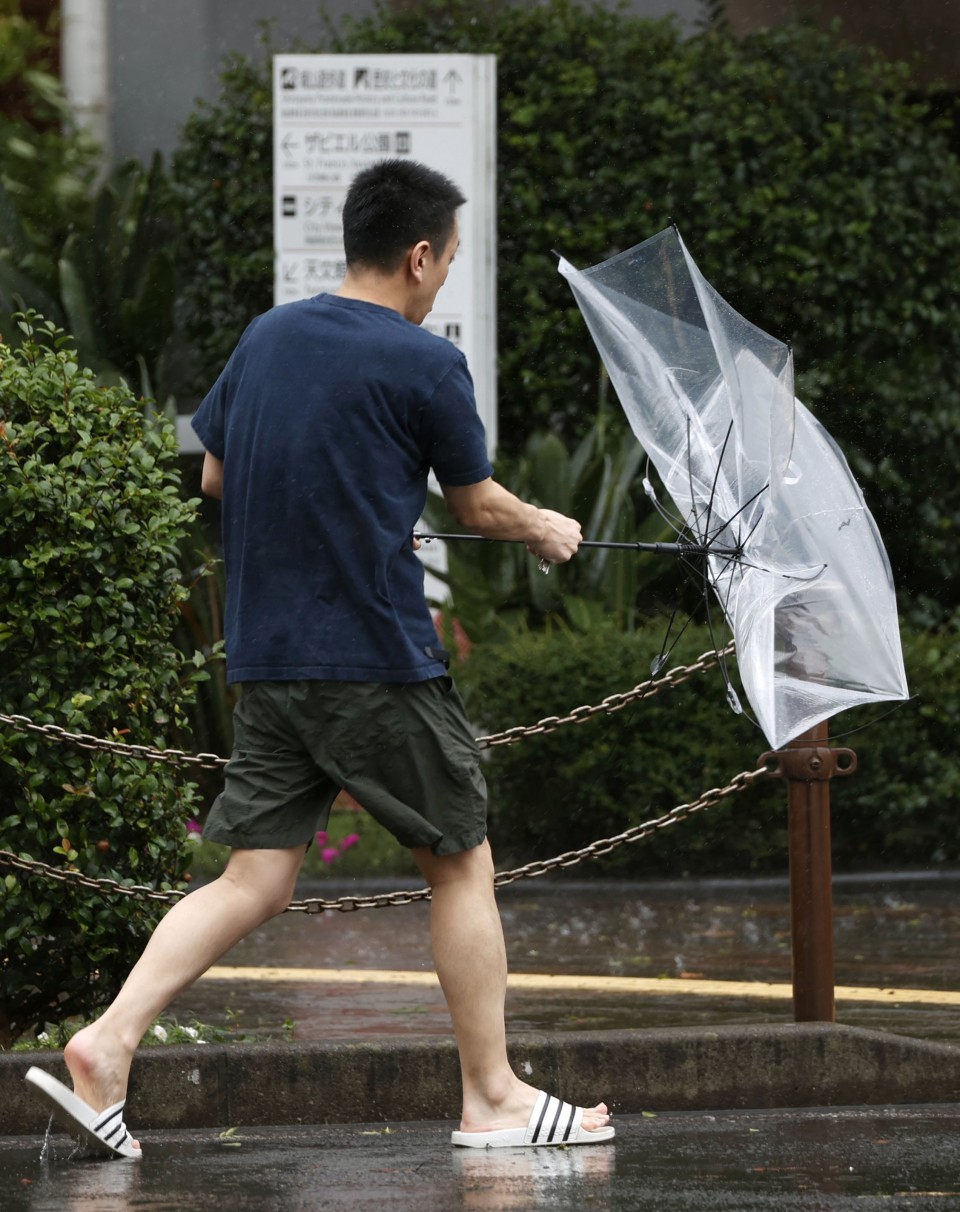 At least 17 people were injured in Kagoshima, Kumamoto, Miyazaki and Nagasaki prefectures due to the typhoon, a Kyodo News tally as of 10 p.m. Sunday showed. Typhoon Haishen also caused power outages in about 142,000 houses.

Japan's weather agency urged maximum caution and called on the public to be vigilant over heavy rain, strong winds, high waves and tidal surges. Days earlier, the Japan Meteorological Agency had issued warnings for people to be prepared for the typhoon.

The agency also said it could have issued a special warning of typhoon for most of Kagoshima Prefecture on Sunday morning, but decided not to after the weather system weakened slightly.

The typhoon passed near Okinawa, the southern island prefecture, and the remote Amami-Oshima Island in Kagoshima Prefecture, on the southern tip of Kyushu, and is expected to move north off Kyushu's west coast from Sunday night through Monday morning, the agency said.

It is projected to reach the Korean Peninsula by Monday morning, according to the agency.

Evacuation orders and advisories have been issued for more than 8.59 million people from over 4 million households in Kyushu and western Japan, according to a separate Kyodo count as of 10 p.m. 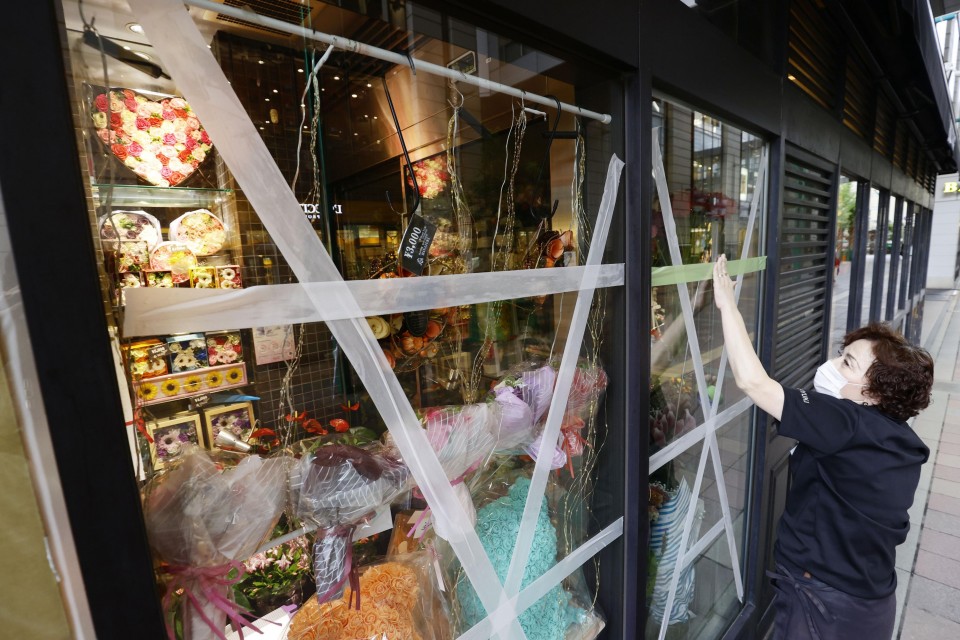 Windows are taped at a Daimaru department store in Fukuoka, southwestern Japan, on Sept. 6, 2020, in preparation for the expected powerful winds due to the approaching Typhoon Haishen. (Kyodo)

The Miyazaki city government said some of its evacuation centers were not able to accept evacuees as they have halved their capacities to maintain social distancing there to prevent the spread of the coronavirus.

In Amami-Oshima, Hisami Hatsuki, a 53-year-old nurse, took shelter with her mother, husband and two sons at a hotel on the island. While anxious about her house as its roof was blown off by a typhoon in the past, she said, "Our lives are more important."

To prevent flooding, the infrastructure ministry said it has released water at 73 dams in 11 prefectures centering on Kyushu and the country's west.

The Kuma River that flooded and killed 14 people in a nursing home in the village of Kuma, Kumamoto Prefecture, due to torrential rain in July is feared to overflow again, according to the Land, Infrastructure, Transport and Tourism Ministry.

The typhoon has also prompted the suspension of public transport operations. Japan Airlines and All Nippon Airways suspended more than 300 flights, centering on those to and from Kyushu and Okinawa, on Sunday, and has decided to halt over 370 flights for Monday.

Kyushu Railway Co. said it will halt its shinkansen and conventional train services on Monday and Tuesday, and will gradually resume them once safety is confirmed.

West Japan Railway Co. is scheduled to cancel Sanyo Shinkansen bullet train services between Hiroshima and Hakata stations all day Monday and reduce train operations on other parts of the line, affecting a total of 215 services and around 32,800 passengers.

The second typhoon to hit the country in less than a week is also disrupting economic activities. Major manufacturers that have plants in Kyushu and western Japan areas, such as Toyota Motor Corp., Nissan Motor Co. and Sony Corp., have decided to halt their operations from Monday to secure the safety of their employees.

Major mobile carrier SoftBank Corp. said its communication services were disrupted on Sunday in parts of Kagoshima and Okinawa prefectures due to power failures and malfunctions in cables connecting base stations triggered by the powerful typhoon. 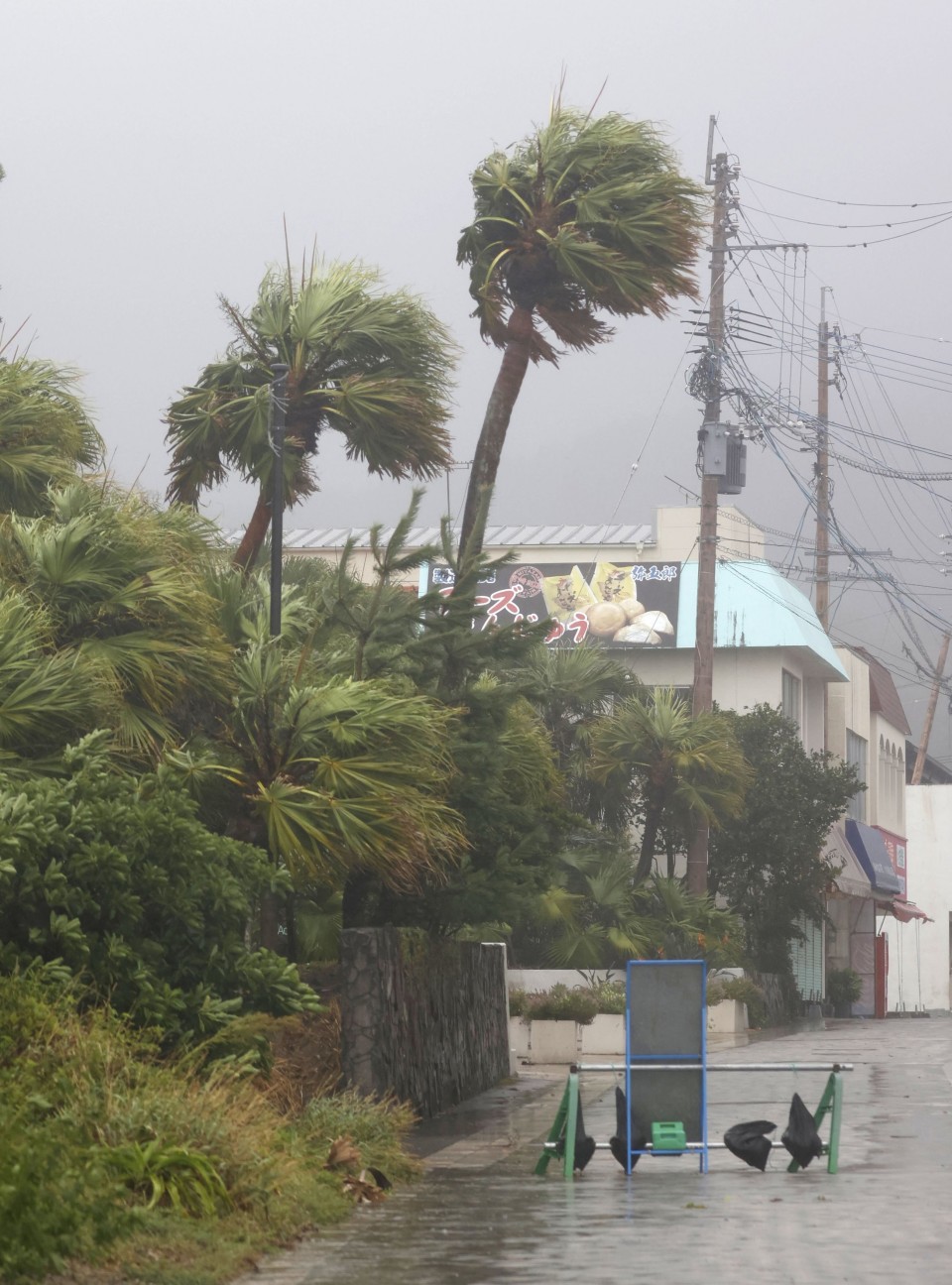 Another carrier, KDDI Corp., also reported communication failure in Kagoshima and Nagasaki, also in Kyushu, due to the ongoing typhoon and Typhoon Maysak that hit Japan last week.

Southern areas of Kyushu could see rainfall of up to 500 millimeters in the 24 hours to 6 p.m. Monday, the agency said. Northern Kyushu and the Tokai central region on the Honshu main island could see up to 400 mm.

As of 9 p.m. Sunday, the typhoon was moving north-northwest at a speed of about 35 km per hour some 90 km west-southwest of Makurazaki, Kagoshima. It had an atmospheric pressure of 945 hectopascals at its center, packing winds of up to 216 km per hour. 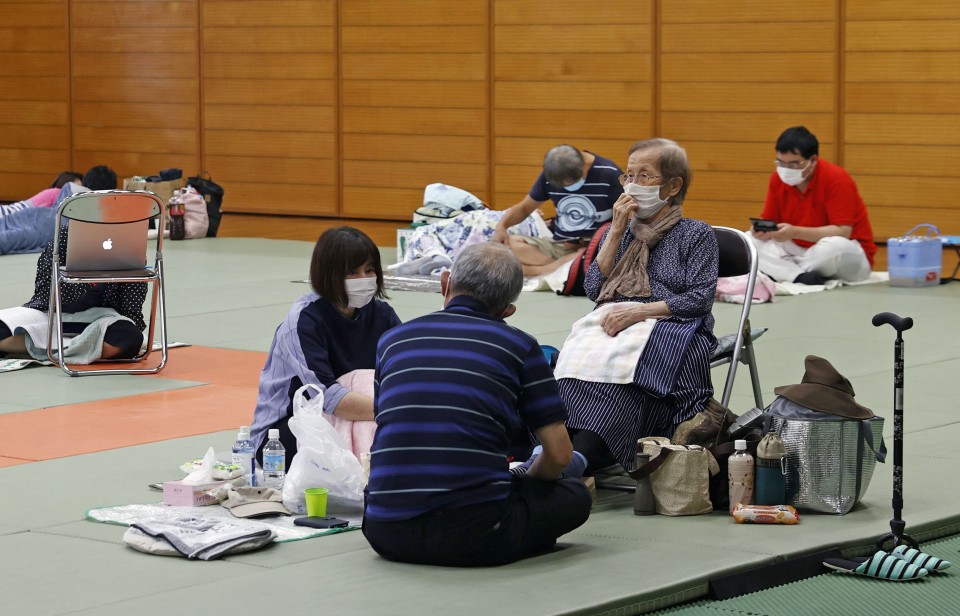 People evacuate to a makeshift shelter in Kagoshima, southwestern Japan, on Sept. 6, 2020, bracing for the approaching Typhoon Haishen. (Kyodo)