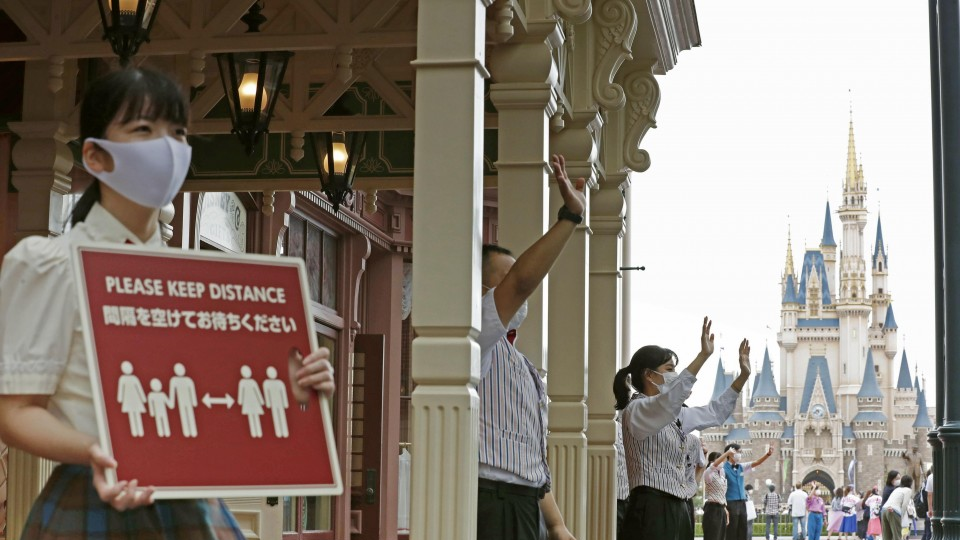 A Tokyo Disneyland staff member asks visitors to observe social distancing at the theme park in Urayasu in Chiba Prefecture on July 1, 2020. (Kyodo)

TOKYO - Tokyo Disney Resort operator Oriental Land Co. said Monday it will cut its semiannual bonus payments for about 4,000 of its employees by 70 percent this winter from its initial plan due to a sharp decline in revenue in the wake of the novel coronavirus pandemic.

It will be the first time the company has cut bonus payments, which company employees in Japan typically see as part of their salaries, from the initial budget.

As for people working at its theme park attractions such as dancers who have had their work hours sharply cut due to reduced operating capacity and live show suspensions, the company will offer them options such as transfers within the company and early retirement, Oriental Land said.

The company is also considering an additional pay cut for its executives following a decision in June to reduce their remuneration by 10 to 30 percent for 10 months through March.

Oriental Land closed the Disneyland and DisneySea parks in late February and resumed their operations from July 1 with shortened hours and at less than 50 percent of their capacity.

The company posted a net loss of 24.87 billion yen ($234 million) in the April-June quarter, as sales plunged 94.9 percent to 6.16 billion yen in the three-month period due to the four-month closure.

In Japan, more than 260 new coronavirus cases were reported Monday, bringing the tally to around 76,650, including about 700 from the Diamond Princess, a cruise ship that was quarantined in Yokohama in February. The death toll stood at 1,466. Tokyo remains by far the hardest-hit area among Japan's 47 prefectures.

The metropolitan government on Monday confirmed 80 new cases of coronavirus infections, down from the previous day's 146. The capital's cumulative cases now stand at 23,083.