Japan's tallest skyscraper around 390 meters high, which is scheduled to be built in front of Tokyo Station in fiscal 2027, will be named "Torch Tower," its developer Mitsubishi Estate Co. said Thursday.

The new landmark with 63 stories above ground and four underground will be a complex of offices, commercial facilities and a hall accommodating around 2,000 people. A luxury hotel and an observation deck, where visitors can view Mt. Fuji, Japan's tallest mountain, will be located in the upper floors. 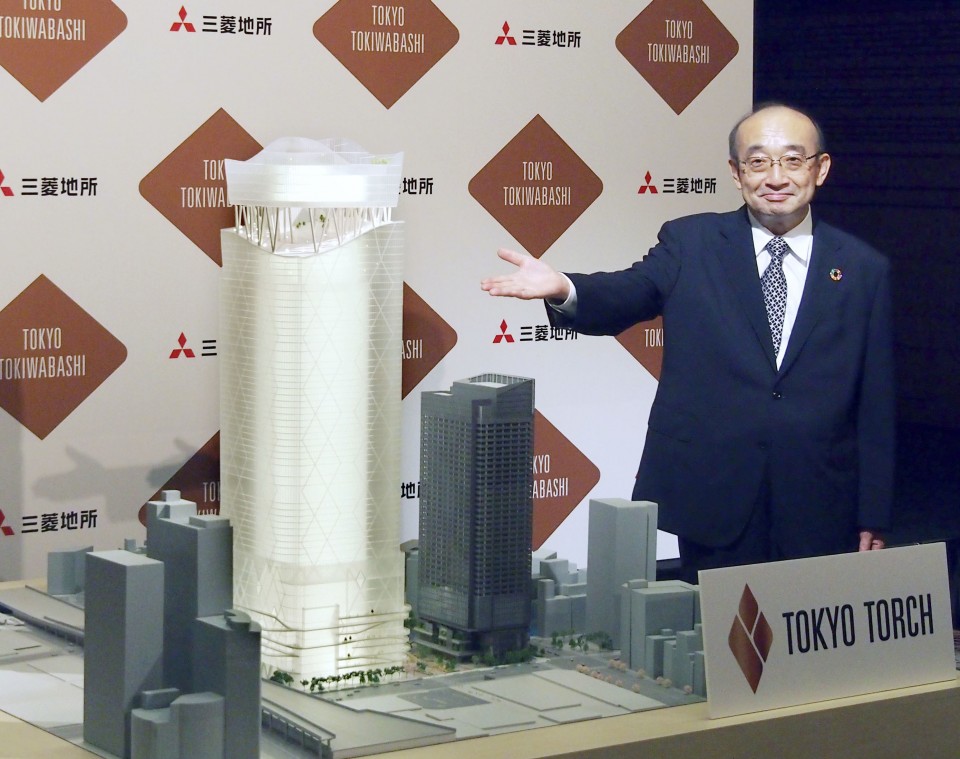 Mitsubishi Estate Co. President Junichi Yoshida explains the company's plan to build Japan's tallest building during a press conference in Tokyo on Sept. 17, 2020. The president said Mitsubishi Estate will build the 390-meter Torch Tower in front of JR Tokyo Station possibly by the end of fiscal 2027, eclipsing the 300-meter Abeno Harukas in Osaka, the current tallest building in Japan. (Kyodo)

The name Torch Tower comes from a wish to lighten up Japan like a torch, Mitsubishi Estate said.

The planned skyscraper is part of a development project, with three other buildings and a 7,000-square-meter plaza slated for construction in a 31,400-square-meter area near Tokyo's Marunouchi business and commercial district.

"By adding a new attraction, we will shape Marunouchi into a district that would be chosen (by businesses)," Mitsubishi Estate President Junichi Yoshida said at a press conference Thursday.

The current tallest building in the country is the 300-meter Abeno Harukas in the western Japan city of Osaka. Under a skyscraper project by Mori Building Co., a 330-meter-tall building is scheduled to be completed in central Tokyo in 2023.

The world's tallest building is 828-meter Burj Khalifa in the United Arab Emirates.