Sushi delivery amid pandemic gets creative with buff bodybuilders

A sushi chef and bodybuilder in central Japan has been garnering attention for his unique take on deliveries during the novel coronavirus pandemic, as he puts on a show displaying his buff figure when dropping off orders.

Masanori Sugiura, a third-generation owner of the 60-year-old sushi restaurant Imazushi in Anjo, Aichi Prefecture, is among several top-ranking bodybuilders acting as couriers for the eatery. Upon delivery, the men take their tops off and pose for customers -- who can also request photographs -- from a socially safe distance. 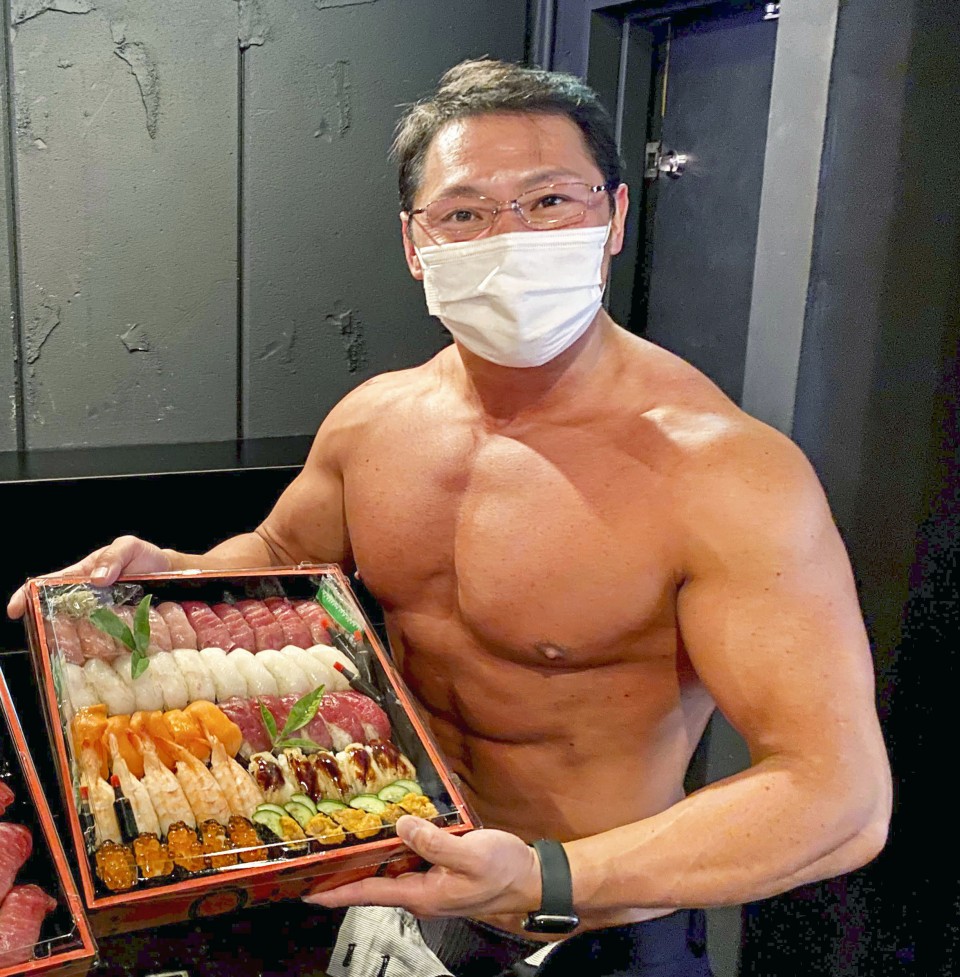 Masanori Sugiura, owner of sushi restaurant Imazushi in Anjo, Aichi Prefecture, is among several top-ranking bodybuilders acting as couriers for the eatery, as seen in this supplied photo taken May 24, 2020. (Photo courtesy of Masanori Sugiura)(Kyodo)

The restaurant mainly takes orders from Nagoya but will accept those from outside the city and as far away as Tokyo and Osaka for the right price.

Imazushi, which typically provides food for memorial services and groups, initially suffered from the pandemic. Its usual revenue of 100 million yen ($940,000) for the April-June quarter dropped to 10 million yen, and Sugiura, 41, was at one point forced to cut the number of employees from 50 to four.

As other restaurants began providing delivery services, Sugiura decided to distinguish his business by using his body.

The chef, who started working out at the gym when he was in his 20s, began entering competitions in his 30s and was ranked third in a world championship for bodybuilding just this February.

Meanwhile, the majority of his fellow competitors were out of work as gym employees, as their facilities closed during the pandemic. "I started this for fun together with a specially selected group of five bodybuilders," Sugiura said.

The "delivery macho" service went viral on Twitter as soon as the official website was up, and inquiries skyrocketed. He now receives around eight to 10 orders on busy days, with monthly earnings from the service topping about 1.5 million yen.

Sugiura is currently looking for potential couriers in Tokyo, where he has been receiving an abundance of orders in recent days.

"In the future, I'd like to try hosting macho tuna cutting shows abroad," he said.