While conducting massive military drills near Taiwan to vent its fury over the self-ruled island's growing political proximity to the United States, China has become wary that Japan too may get closer to what the mainland regards as a renegade province.

In September, Japan's new prime minister, Yoshihide Suga, tapped Nobuo Kishi, known for his affinity for Taiwan, as defense minister. He is also the younger brother of Suga's predecessor, Shinzo Abe, seen by Beijing as a pro-U.S. and hawkish conservative.

The appointment of Kishi came as China has been trying to maintain normal ties with Japan, as its tensions with the United States have been escalating over security issues including Washington's expanded outreach to democratic Taiwan. 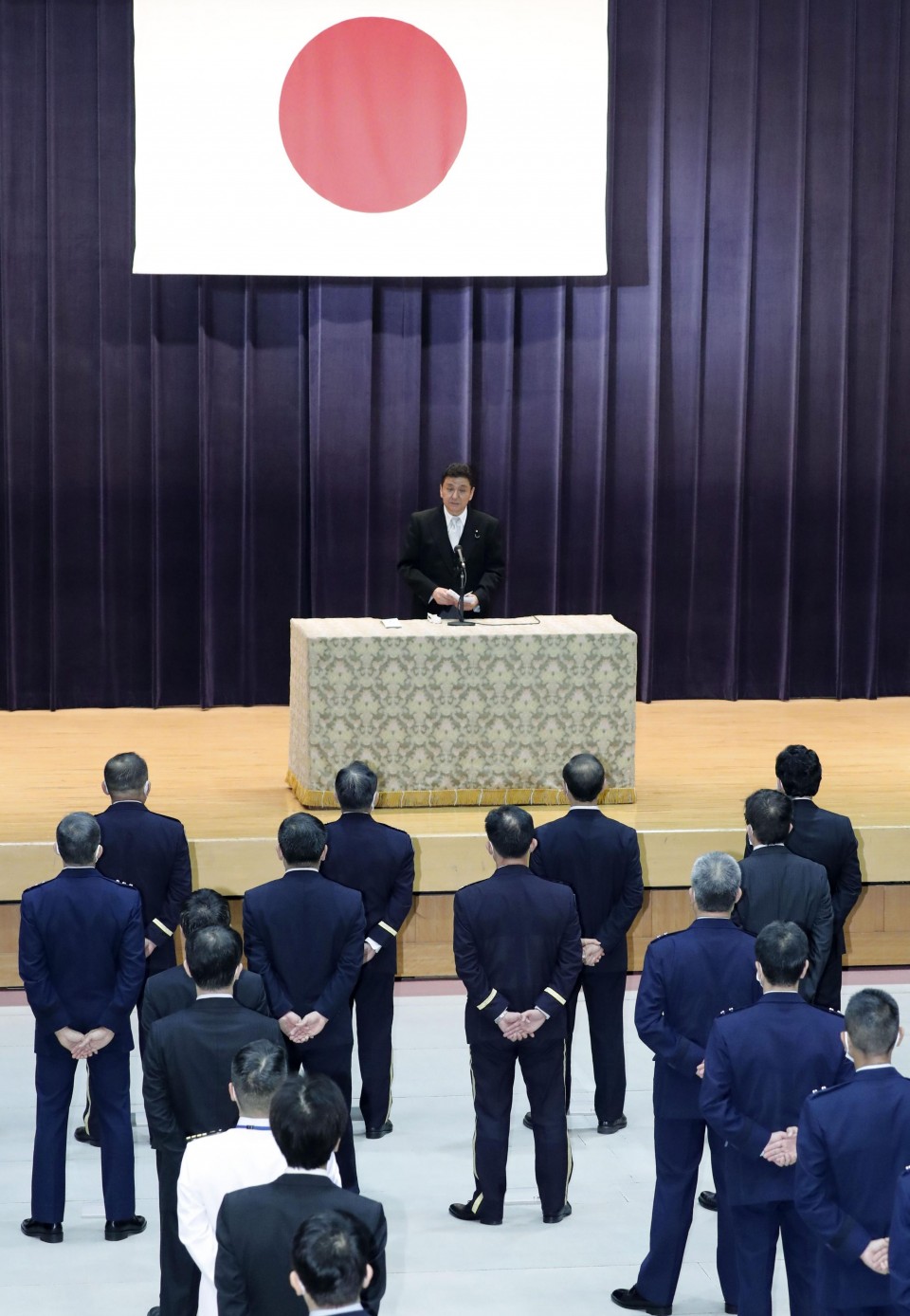 Japan's new defense minister, Nobuo Kishi, speaks during a ceremony at the Defense Ministry headquarters in Tokyo on Sept. 17, 2020, a day after he took up the post under the administration of new Prime Minister Yoshihide Suga. (Kyodo)

The leadership of Chinese President Xi Jinping "must have been surprised," a diplomatic source in Beijing said, adding it may "take adequate time" to analyze whether Suga's decision is a sign that Japan would attempt to enhance relations with Taiwan.

Taiwan and mainland China have been separately governed since they split in the wake of a civil war in 1949. Their relationship has deteriorated under the government of independence-leaning Tsai Ing-wen, who has served as Taiwan's president since 2016.

Tokyo cut diplomatic ties with Taipei and established them with Beijing in 1972, but Japan and Taiwan have boosted private-sector-led economic cooperation and people-to-people exchanges in wide areas, ranging from education, art and sports to health care.

Kishi, who was adopted by his aunt and uncle, gained a spotlight when he visited Taiwan in August with former Prime Minister Yoshiro Mori to mourn the death of its former President Lee Teng-hui, the island's first popularly elected leader.

In 2015, Kishi, a member of a lawmaker group aimed at bolstering relations with Taiwan, hosted Tsai, the then leader of the island's opposition party, when she traveled to Japan's Yamaguchi Prefecture, Abe's political home turf.

Kishi is "very friendly toward Taiwan. Underneath the surface, he is likely to evolve something tacit with Taiwan," said Tai Wan-chin, a professor emeritus at Tamkang University in New Taipei City.

Hours after Suga launched his Cabinet on Sept. 16, Xi said in a congratulatory message to the prime minister that Beijing and Tokyo should "promote the construction of a relationship that is suitable for the new era," according to Chinese media.

Foreign Ministry spokesman Wang Wenbin also said Beijing hopes that the two countries will strengthen "exchanges and cooperation" in various fields, but he urged Japan to respect the mainland's "one China" policy when asked about Kishi.

The Chinese and Japanese governments did not elaborate whether Xi and Suga touched on matters related to Taiwan in their first talks over the phone earlier this month.

In Japan, conservative politicians like Kishi and Abe have traditionally put emphasis on relations with Taiwan than on those with China, especially when the security environment in the Asia-Pacific region has worsened amid Beijing's military buildup.

As the administration of U.S. President Donald Trump has been eager to deepen ties with the Tsai government, China is concerned that Suga may "follow suit" by using Kishi as a "de facto envoy" to Taiwan, a source familiar with Sino-American relations said.

Tai said the United States "welcomes Kishi's appointment," as he is expected to inherit the diplomatic policy of Abe, who has built a personal rapport with Trump.

As the increase in infections with the new coronavirus has peaked out in the nation, China has been stepping up provocations against Taiwan and the United States by carrying out large-scale military drills in the nearby waters.

China, however, has believed that Kishi may be forced to assume a "wait-and-see attitude" to the Taiwan issue for the time being, given that the 61-year-old House of Representatives lawmaker seems "inexperienced" in defense policy, the source in Beijing said.

Jeffrey Hornung, a political scientist at the Rand Corporation, a U.S. research organization, said he thought the appointment of Kishi as defense minister suggested Suga is not necessarily planning to make any bold decisions on security matters in the near future.

Kishi has served as a parliamentary vice defense minister in the past, but he has not been actively expressing his views on security in public, Hornung said during an event hosted by the Heritage Foundation, a Washington think tank, calling him a "novice."

Meanwhile, the Global Times, a tabloid affiliated with the Chinese Communist Party, said, "Kishi had visited the island of Taiwan several times in recent years, prompting Taiwan media to hype him as 'super friendly' to the island."

But the newspaper also quoted a Chinese specialist of Japanese affairs as saying, "Japanese politicians 'know fairly well' of the pros and cons of a relationship with the island and Chinese mainland, and that Kishi is unlikely to continue the visits."

After becoming defense minister, Kishi has said he will deal with the Taiwan issue in accordance with a joint communique signed in 1972 between then Japanese Prime Minister Kakuei Tanaka and then Chinese Premier Zhou Enlai.

The communique stipulates China "reiterates that Taiwan is an inalienable part of the territory" of it and Japan "fully understands and respects this stand."