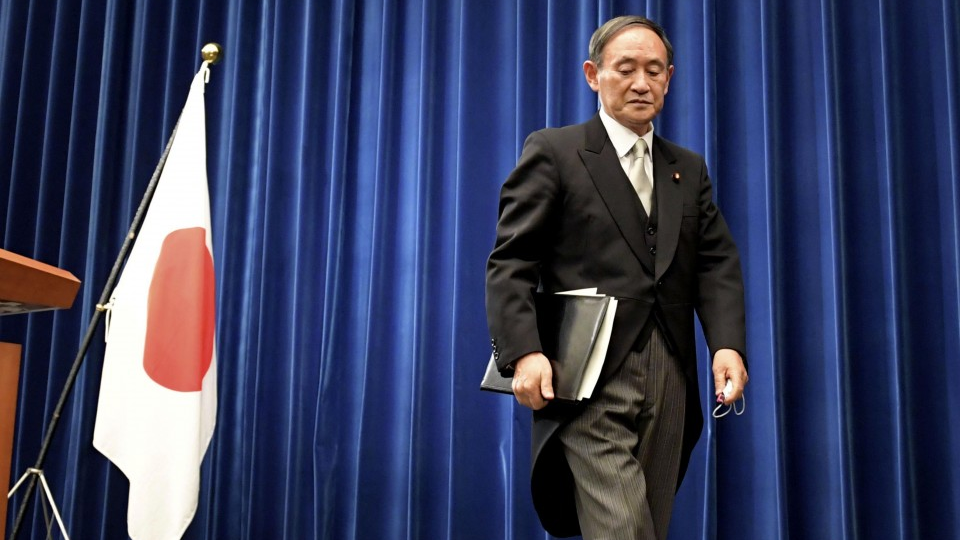 Japan's new prime minister Yoshihide Suga leaves after speaking at a press conference at his office in Tokyo on Sept. 16, 2020. (Kyodo)

While a direct comparison cannot be made due to differing polling methods, the figure compares with 62.0 percent for his predecessor Shinzo Abe's Cabinet upon his return to power in December 2012.

Among prime ministers who took office after 2000, only Junichiro Koizumi and Yukio Hatoyama had higher ratings at the beginning of their tenures, at 86.3 percent and 72.0 percent, respectively.

Suga, leader of the ruling Liberal Democratic Party, was elected prime minister by parliament on Wednesday. Abe's right-hand man as chief Cabinet secretary, Suga has said he will build on "Abenomics," a mix of measures aimed at beating deflation and spurring growth in the world's third-largest economy.

In the nationwide telephone survey, which was conducted over two days from Wednesday and collected about 1,000 responses, 58.7 percent supported Suga's focus on providing continuity with Abe, while 32.4 percent did not.

In response to a multiple-choice question on the issues the Suga administration should focus on tackling, the most common answer was the "COVID-19 response" at 64.1 percent, followed by "economy and jobs" at 35.2 percent, "pensions, medical and nursing care" at 23.8 percent and "fiscal consolidation" at 18.4 percent.

On the best timing for the next general election, 55.1 percent said at or near the end of the House of Representatives' current term in October 2021.

Suga has remained tight-lipped about whether he may dissolve the lower house before then and call a snap election.

Asked which party they plan to vote for under the proportional representation system, 44.4 percent of respondents said the LDP, 9.0 percent said the Constitutional Democratic Party of Japan, 6.1 percent said the Japan Innovation Party, and 5.9 percent said Komeito, the LDP's junior coalition partner.