The United States reviewed and studied a plan "that could include the use of 80 nuclear weapons" in response to an attack by North Korea, according to U.S. journalist Bob Woodward in his book "Rage" published Tuesday.

As tensions between the United States and North Korea heightened after Pyongyang test-fired an intercontinental ballistic missile in 2017, Washington had also been updating a plan for a leadership strike on Pyongyang, Woodward said in his book, based on interviews with U.S. President Donald Trump. 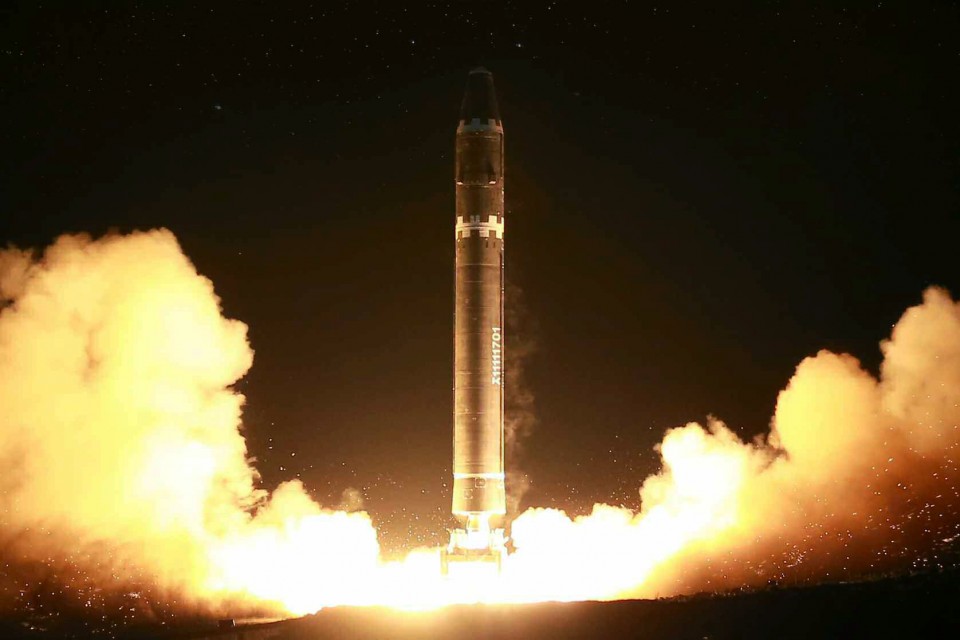 The Rodong Sinmun, North Korea's leading newspaper, publishes photos in its Nov. 29, 2017, edition of the launch of the new Hwasong-15 intercontinental ballistic missile. Pyongyang claims the missile, which it test-fired the same day, is a new type that can reach any U.S. target. (Photo courtesy of Korea Media)(Kyodo)

Trump said in an interview with Woodward on Dec. 13, 2019 that North Korean leader Kim Jong Un "was totally prepared" to go to war with the United States but that it was averted because of their first-ever U.S.-North Korea summit in June 2018, according to the book.

When Woodward asked whether Kim told Trump directly about his readiness to go to war, the president said, "Ah, yes, he did," according to the book.

"And he expected to go (to war). But we met," Woodward quoted Trump as saying.

Kim also told U.S. Secretary of State Mike Pompeo that he was ready to go to war and Pompeo later told an associate he did not know whether it was real or a bluff, according to the book.

Woodward also wrote that Trump had delegated authority to then-U.S. Secretary of Defense Jim Mattis to use a conventional interceptor missile to shoot down any North Korean missile that might be headed for the United States.

Even when Mattis was moving in a car, he was followed by a communications team equipped with a geospatial map that would track the missile's anticipated flight path and he could issue from his location an order to shoot it down if it appeared to threaten South Korea, Japan or the United States, according to the book.