Over the past two weeks, Naomi Osaka used her platform as a world-famous athlete to draw attention to the racial injustice and systematic police brutality that has resulted in a wave of protests in the United States. 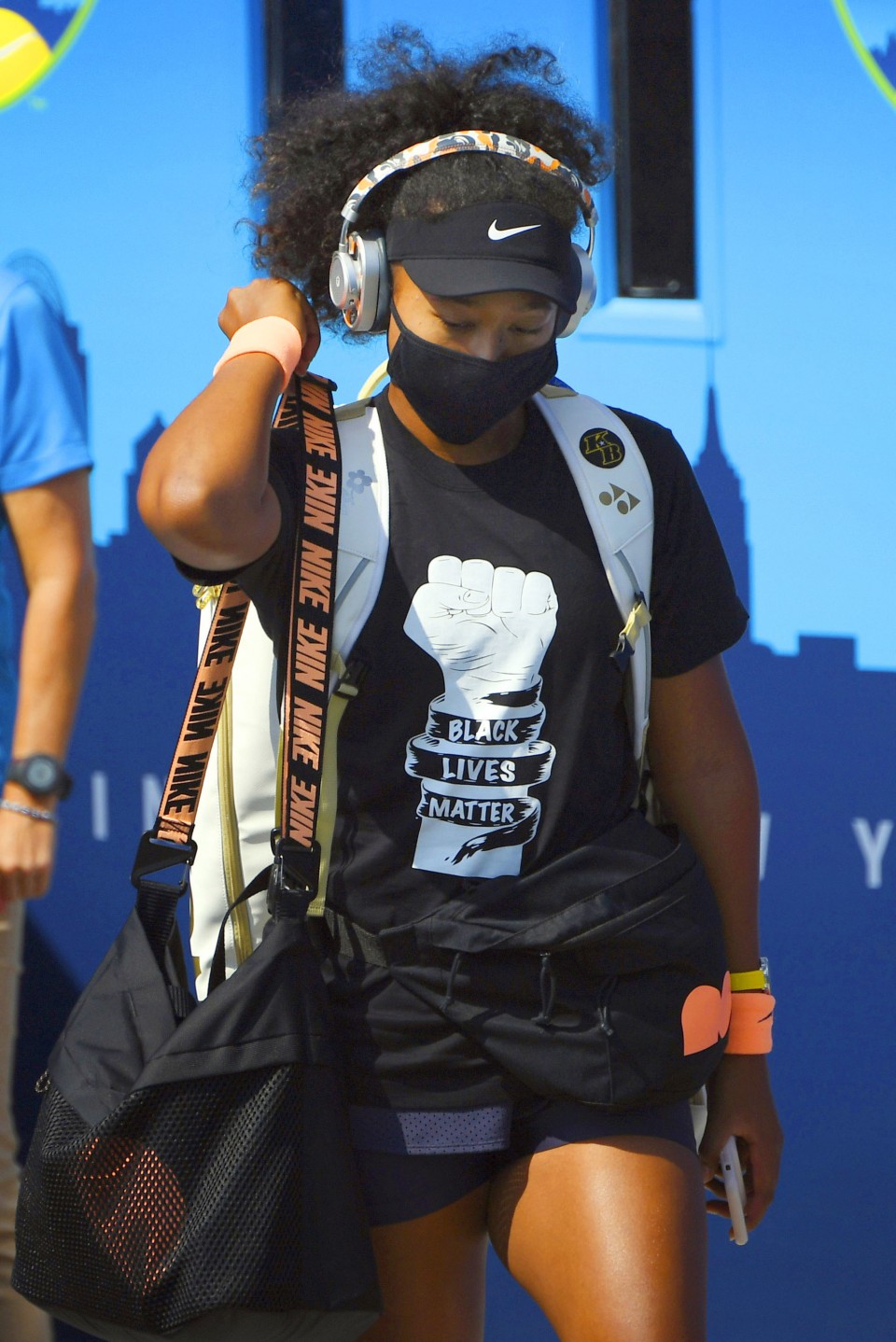 Naomi Osaka is pictured wearing a "Black Lives Matter" t-shirt ahead of her semifinal match against Elise Mertens at the Western and Southern Open in New York.(Kyodo)

The spotlight she cast on the Black Lives Matter movement would not have been as bright as it was, though, had she not won all seven of her matches on the way to claiming the U.S. Open title at an empty Flushing Meadows in New York, all the while delivering on a personal goal she revealed after the first round.

Osaka went viral on social media at the end of the last month after walking onto the court at Arthur Ashe Stadium wearing a face mask bearing the name of Breonna Taylor, a black woman killed by Louisville police in March.

"I have seven masks," Osaka said after her opening-round win over fellow Japanese Misaki Doi.

"It's quite sad that seven isn't enough given the number of names (of people killed). Hopefully, I'll make the final and you can see them all." 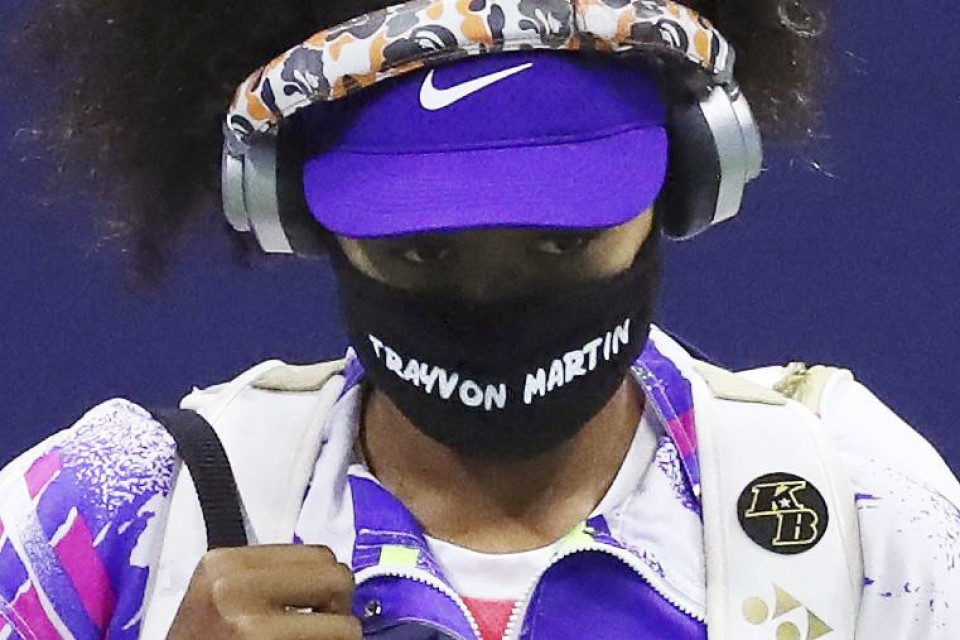 Naomi Osaka of Japan walks out wearing a mask with the name of Trayvon Martin printed on it before her Women’s Singles fourth round match against Anett Kontaveit of Estonia on Day Seven of the 2020 US Open at the USTA Billie Jean King National Tennis Center on September 6, 2020 in the Queens borough of New York City. (Getty/Kyodo)

Osaka came back from a set down to beat two-time major winner Victoria Azarenka in a thrilling women's singles final on Saturday, capturing her second U.S. Open championship, third Grand Slam title and securing a return to No. 3 in the world rankings.

During the trophy ceremony, the 22-year-old was asked what message she wanted to send with the seven names.

"The message you got is more the question," she replied. "I feel like the point was to make people start talking."

She succeeded and was publicly thanked by families of the alleged victims of police violence which she admitted had jarred her emotions.

"I was just trying really hard not to cry," Osaka said in a press conference after her win. "It's extremely touching that they would feel touched by what I'm doing."

"I'm not sure what I would be able to do if I was in their position but I feel like I'm a vessel at this point, in order to spread awareness," Osaka said. "It's not going to dull the pain, but hopefully I can help with anything that they need." 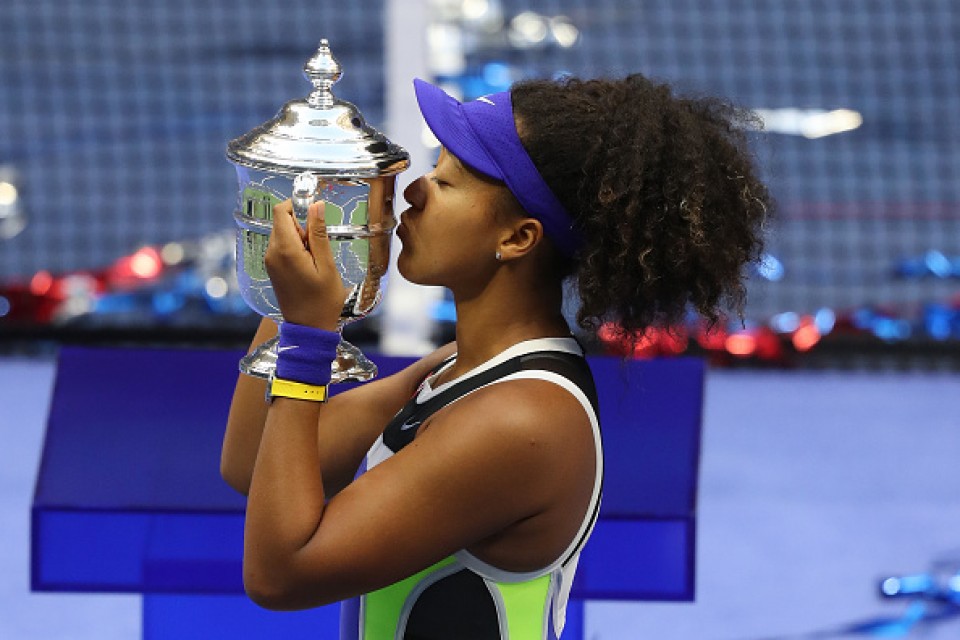 Naomi Osaka of Japan kisses the trophy in celebration after winning her Women's Singles final match against Victoria Azarenka of Belarus on Day Thirteen of the 2020 US Open at the USTA Billie Jean King National Tennis Center on September 12, 2020 in the Queens borough of New York City.(Getty/Kyodo)

Born to a Haitian father and Japanese mother in Japan, Osaka immigrated to the United States when she was 3 years old and has been in the racial minority her whole life. She grew up listening to her father tell stories about his home island in the Caribbean which is among the world's poorest countries outside of Africa.

"Honestly, I've read a lot into Haitian history. My dad always talks about that," Osaka said. "For me, I feel like sharing stories and hearing people's experiences is very valuable."

During the WTA Tour's coronavirus shutdown, Osaka went out and participated in BLM demonstrations in support of the movement.

Last month, she stopped playing at the Western and Southern Open -- a U.S. Open tune-up event held in New York this year to prevent the spread of the virus -- while joining a series of sports boycotts across the United States calling for social justice and an end to police violence.

"Before I am an athlete, I am a black woman," she said on Twitter. "As a black woman, I feel as though there are much more important matters at hand that need immediate attention, rather than watching me play tennis."

She continued her campaign after tournament organizers postponed all matches to show their solidarity with the movement, before pulling out with a hamstring injury ahead of her scheduled final, also against Azarenka.

At the U.S. Open, Osaka decided to take a different approach as the impact of sports protests around the country inevitably waned.

"The quarantine definitely gave me a chance to think a lot about things, what I want to accomplish, what I want people to remember me by," she said. "For me, I came into this tournament, or these two tournaments, with that mindset."

Osaka's activism on and off the court was praised by peers in her home country, where professional athletes generally shy away from taking a political stand for fear of upsetting corporate sponsors and alienating fans.

"It's wonderful that she takes human rights issues seriously and achieved results as an athlete," said 22-year-old Momoko Nojo, a senior at Tokyo's Keio University who represents the "No Youth No Japan" association which disseminates information on politics and social issues to young people.

"It's often said that young people aren't interested in social issues, but in Japan there is discrimination based on things like gender and appearance, and young people are very concerned about that."

More than 50,000 people viewed a post that No Youth No Japan posted about black discrimination on its Instagram in June. Other university students in the area have also reacted positively to Osaka's actions, and have been cheering her on during matches. 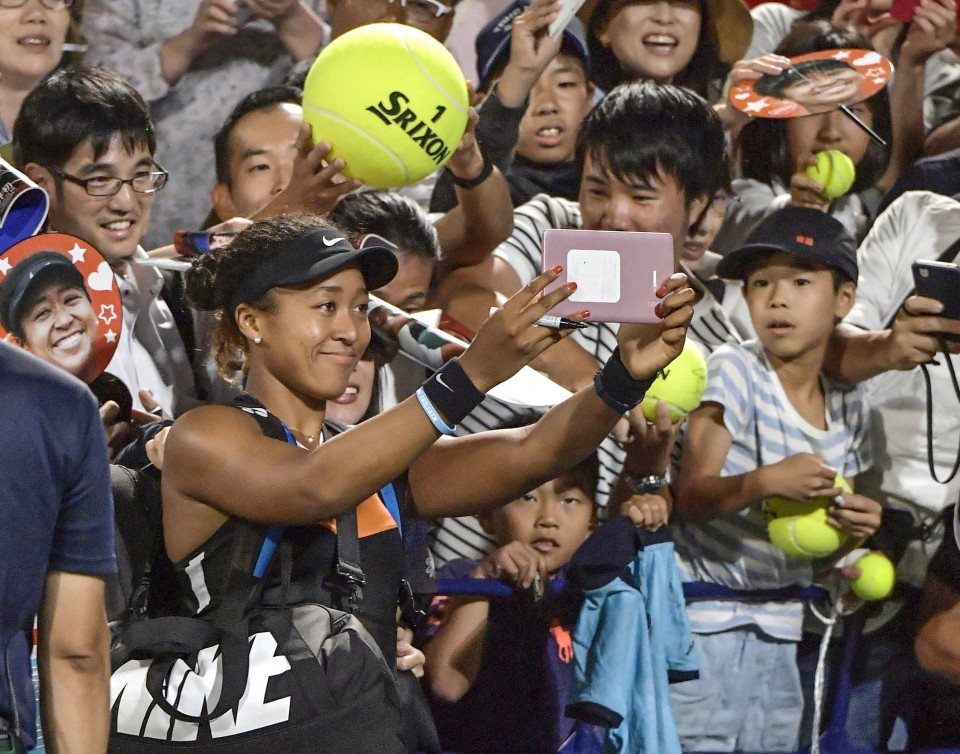 "Even though it wasn't a complicated speech or action, I understood what she wanted to say," Nojo said. "She taught me that there are many ways to show your intentions."

Manami Sunaga, 28, the head of public relations for Black Lives Matter Tokyo, said, "I was encouraged by the way she put her unshakeable beliefs into action."

With 80 percent of the group's members being women in their late teens and early 20s, Osaka provides an excellent role model for the Tokyo-based branch, which opposes anti-black racism in Japan in addition to spreading awareness of the movement.

Sunaga said that Osaka has created a good opportunity to instill the message in young people that "you can't discriminate against someone just because their race or beliefs are different."

"I'd like to see a culture in which athletes can raise their voice about political issues and have them be borne into the world of sports."