Kioxia Holdings Corp. said Monday it will delay what would have been Japan's largest initial public offering this year amid heightened U.S.-China tensions that have hurt the outlook for the semiconductor industry.

Kioxia, formerly known as Toshiba Memory Holdings Co. and the world's second-biggest producer of NAND flash memory chips, said the decision was made after taking into consideration market volatility and the spread of the novel coronavirus, adding it will reconsider "the appropriate timing" for going public. 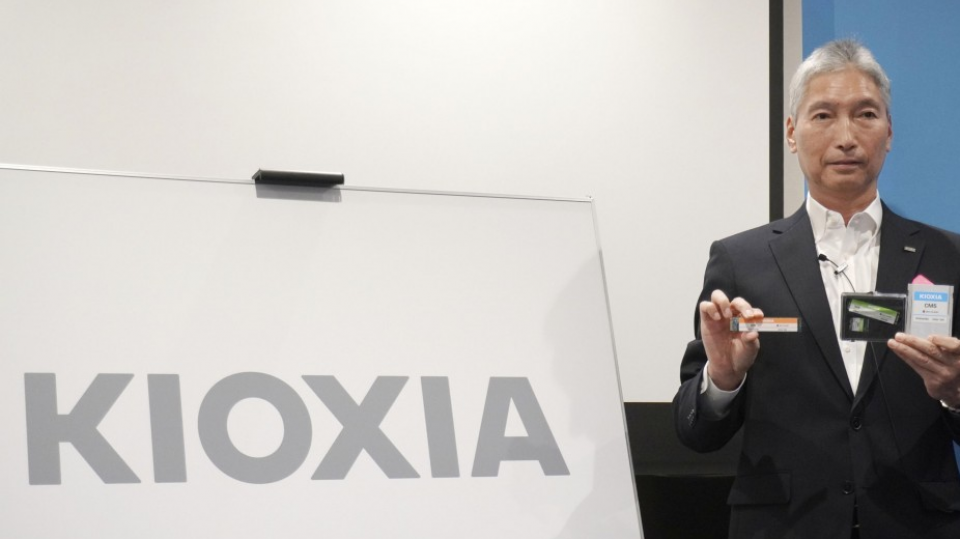 The logo of Kioxia Holdings Corp. is unveiled at a press conference in Tokyo on Sept. 30, 2019. (Kyodo)

Kioxia was expected to raise 330 billion yen ($3 billion) in the IPO scheduled for Oct. 6 and have a market capitalization of more than 1.5 trillion yen. It had planned to use the funds raised to improve its competitiveness with industry leader South Korea's Samsung Electronics Co. in the highly volatile chip market.

Kioxia, bought by a consortium led by U.S. private equity fund Bain Capital and still 40.6 percent owned by Toshiba Corp., became the latest company sucked into the rivalry between the United States and China.

After a series of steps taken under the administration of President Donald Trump, the United States restricted China's Huawei Technologies Co. from obtaining chips developed or produced using U.S. software or technology.

Kioxia's chip-making equipment uses U.S. technology and the bulk of its products are subject to the U.S. restrictions.

The U.S. tightening of the screws on Huawei could affect more Japanese firms. Huawei has procured components worth over 1 trillion yen from Japanese suppliers every year.

In 2018, struggling Toshiba sold its chip-making unit to the consortium as part of its restructuring measures.

Toshiba said it will cancel its plan to sell some of its shareholdings in Kioxia and reduce the stake to 32.0 percent as the IPO has been postponed.

With the escalating U.S.- China tensions, there were increasing concerns whether Kioxia's debut would be welcomed by investors.

Earlier this month, Kioxia set a tentative price range of 2,800 yen to 3,500 yen per share for the IPO, lower than the 3,960 yen it anticipated in late August when the Tokyo Stock Exchange approved the listing of shares.

Still, Bain Capital, Kioxia's largest shareholder with a 50.2 percent stake, had wanted the IPO to go ahead as planned, according to people familiar with the situation.