Ozeki Takakeisho recovered from his second loss at the Autumn Grand Sumo Tournament with a victory on Monday, Day 9, and stayed among a group of six wrestlers all vying for the title.

After relinquishing his sole lead a day earlier, Takakeisho fended off shoves from No. 5 maegashira Kiribayama (6-3) in the penultimate bout at Tokyo's Ryogoku Kokugikan and spun the rank-and-filer around before chasing him off the raised ring.

In the day's final bout, Asanoyama (6-3) nearly fell victim to another dodging start by No. 4 Tochinoshin (4-5), who had slapped Takakeisho down to his second defeat. 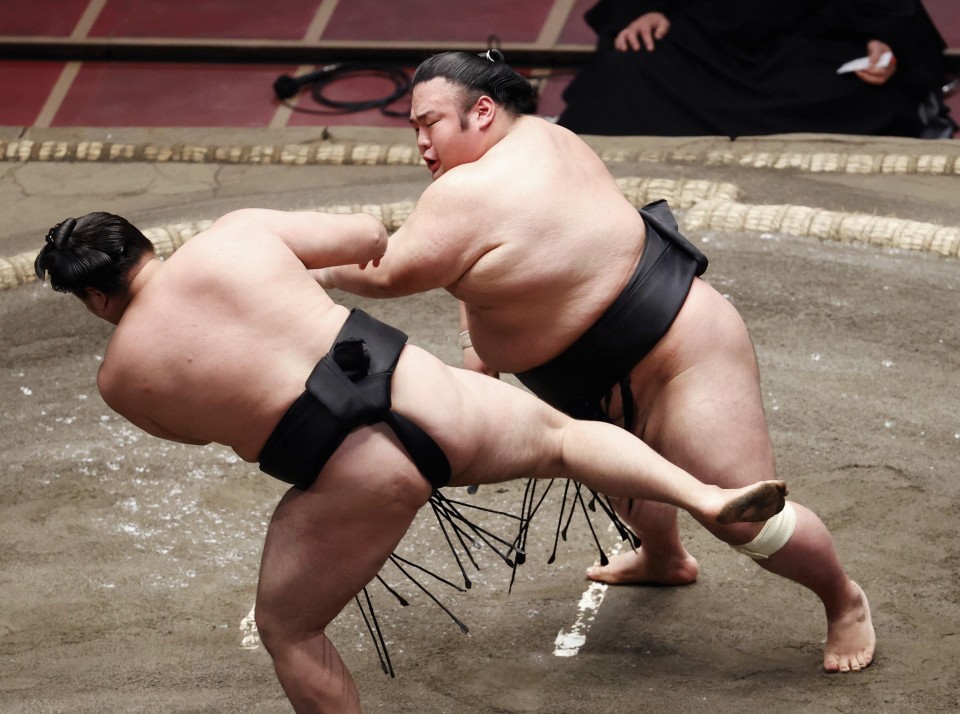 Ozeki Takakeisho (R) defeats Kiribayama on the ninth day of the Autumn Grand Sumo Tournament at Ryogoku Kokugikan in Tokyo on Sept. 21, 2020.(Kyodo)

But the ozeki, competing in his second tournament at sumo's second-highest rank, planted himself on the clay and tossed aside the Georgian with an overarm throw to remain in contention for the Emperor's Cup.

Shodai (7-2) survived a scare against fellow sekiwake Daieisho (3-6), who nearly won by push-out before the grapplers were ordered to fight again when it was deemed they both hit the ground out at the same time.

Shodai was again on the receiving end of a strong shoving attack from the new sekiwake, but held his ground at the edge before thrusting Daieisho down.

No. 1 Terunofuji (7-2), a former ozeki and winner of the July meet, earned his seventh straight win after getting a hold of No. 2 Hokutofuji (3-6) and executing a well-timed thrust-down.

No. 8 Wakatakakage (7-2) worked his way around the big frame of No. 6 Takayasu (6-3), keeping his head low and nimbly moving aside to get behind the former ozeki and send him out of the ring.

No. 9 Onosho (7-2) saw his drives stopped twice by No. 12 Kotoshoho (6-3) but made it count on his third attempt by shoving him over the straw bales.

After managing to hold out against Meisei's armlock-throw attempts, the makuuchi rookie found himself backtracking to the edge but eventually recovered for a push-out win.