The Tokyo metropolitan government on Thursday lowered its coronavirus alert by one level from the highest of four as the number of infections has been on a downward trend in recent days.

Tokyo Gov. Yuriko Koike said it is important to expand social and economic activities while maintaining necessary measures against the virus and that she plans to withdraw next Tuesday its request for establishments serving alcohol as well as karaoke venues in the capital's 23 central wards to close by 10 p.m.

The central government, meanwhile, will start including Tokyo in its domestic travel subsidy campaign from Oct. 1 given Koike's decision to lower the alert level, officials said, after having excluded the capital from the program since its launch in July due to the rapid spread of infections. 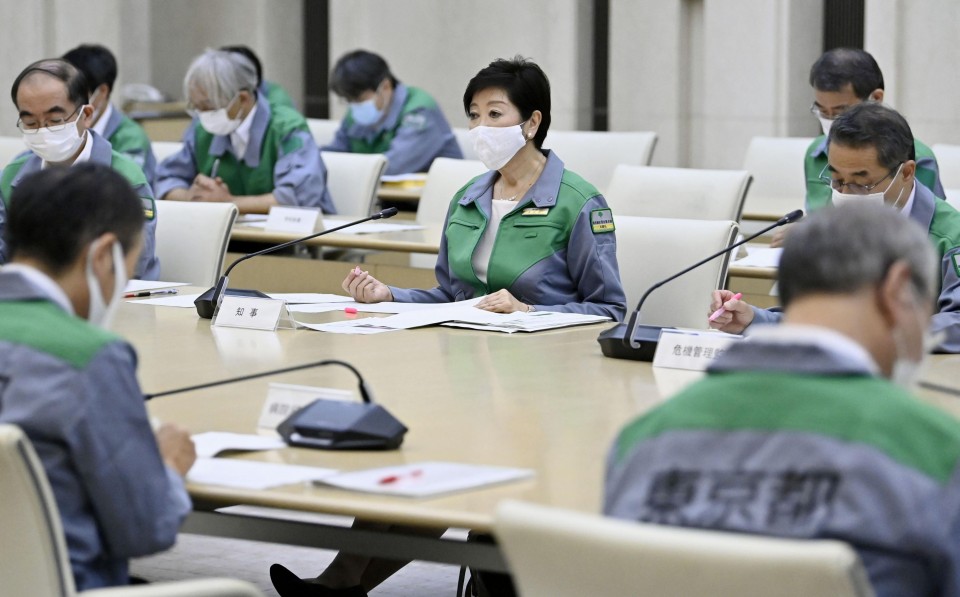 Tokyo Gov. Yuriko Koike (C) attends a meeting with a panel of experts to assess the current situation of coronavirus infections in the Japanese capital on Sept. 10, 2020. (Kyodo)

The plan will be finalized following a meeting of a panel of experts on Friday, according to the officials, who spoke on condition of anonymity.

Under the "Go To Travel" campaign, the government covers part of the cost of domestic tourist trips. The inclusion of Tokyo, which has a population of nearly 14 million, may significantly boost consumption and help revive the tourism industry hard hit by the coronavirus pandemic.

Two weeks after the introduction of the four-level virus warning system on July 2, the metropolitan government raised the alert to the highest level, meaning "infections are spreading."

But since mid-August, the number of new cases has been trending downward. On Monday, Tokyo confirmed 77 daily infections, the lowest since July 8 and below the 100 mark for the first time in two weeks. Under the alert system, the second-highest level means "vigilance against a resurgence of the virus is needed."

On Thursday, Tokyo reported 276 additional virus cases, bringing the cumulative total in the capital to 22,444, the highest by far among Japan's 47 prefectures.

"We need to remain vigilant for a possible resurgence," Koike said at a press conference.

Across Japan, 711 new cases were reported, bringing the total number of infections to 74,659, including about 700 from the Diamond Princess, a cruise ship that was quarantined in Yokohama in February. The death toll stood at 1,432.

Masataka Inokuchi, vice president of the Tokyo Medical Association, warned at a panel meeting Thursday that the alert level "could return to its highest" if there are cluster infections.

The metropolitan government initially called for establishments serving alcohol and karaoke venues to shorten their business hours between Aug. 3 and 31.

After Koike asked residents to avoid traveling or returning to hometowns during the summer holiday season, the number of infections began decreasing from mid-August.

While the request for Tokyo cities and towns outside the 23 wards was removed as scheduled, it was extended to next Tuesday in the central areas.

"I appreciate the lifting," said Masahiro Ito, 62, a karaoke bar owner in central Tokyo. He said many people come to his bar after 10 p.m. and that he has lost customers following the request.

Tokyo to end shorter hours for bars Tues., virus alert to be lowered