The United States on Friday marked the 19th anniversary of the Sept. 11 terror attacks, with President Donald Trump delivering a speech with patriotic themes at the crash site of one of the hijacked planes as he campaigns for his re-election.

A moment of silence was observed at the time when the first hijacked plane struck the World Trade Center in New York in 2001, which marked the start of a total of four coordinated attacks that killed nearly 3,000 people in the deadliest foreign strike ever on U.S. soil. 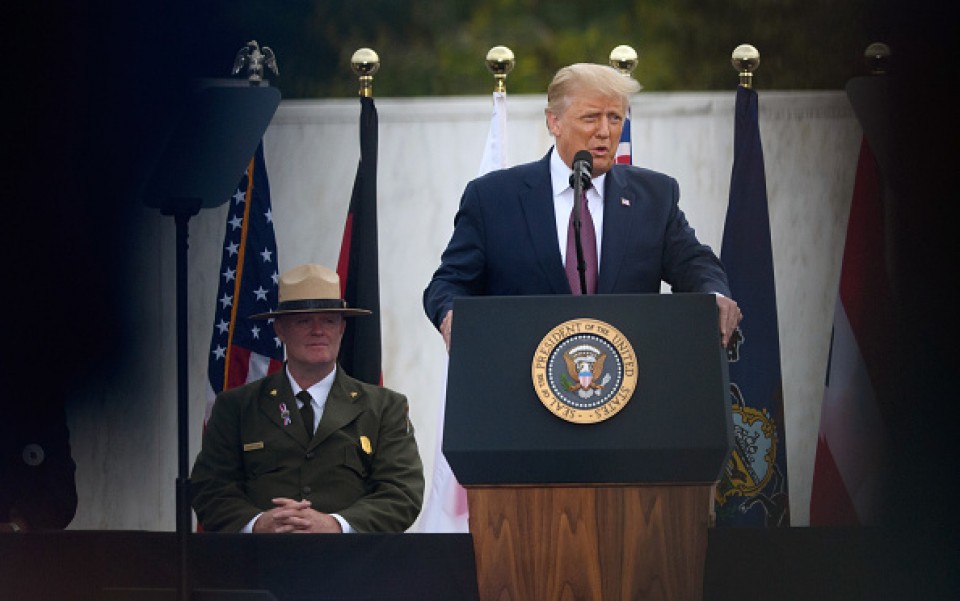 U.S. President Donald J. Trump delivers remarks during a ceremony at the Flight 93 National Memorial commemorating the 19th anniversary of the crash of Flight 93 and the September 11th terrorist attacks on September 11, 2020 in Shanksville, Pennsylvania. (Getty/Kyodo)

Trump attended a memorial ceremony in Shanksville, Pennsylvania, where the fourth hijacked plane crashed into an empty field located about 20 minutes by air from the nation's capital, after passengers resisted hijackers.

Trump delivered a somber speech at the site, but his choice of locations suggested he did not want to let an opportunity to appeal to voters ahead of the Nov. 3 election go to waste. Pennsylvania is one of the battleground states crucial for Trump's re-election.

Calling the passengers on Flight 93 "heroes," Trump said that they are "an everlasting reminder that no matter the danger, no matter the threat, no matter the odds, America will always rise up, stand tall, and fight back."

"We resolve to stand united as one American nation, to defend our freedoms, to uphold our values, to love our neighbors, to cherish our country, to care for our communities, to honor our heroes, and to never, ever forget," he added.

Democratic presidential nominee Joe Biden also traveled to Shanksville to pay his respects to the passengers and crew of Flight 93 after attending a ceremony in New York, where he and other attendees were seen wearing masks amid the coronavirus pandemic.

On the morning of Sept. 11, 2001, terrorists from al-Qaida, an Islamist extremist group, hijacked four commercial airplanes, deliberately crashing two of them into the twin towers of the World Trade Center complex and a third plane into the Pentagon in Virginia.

Trump has expressed his desire to withdraw U.S. forces from the war-torn country. The United States signed a peace deal with Taliban insurgents in February, and the Afghan government and the Taliban are expected to hold talks toward a permanent cease-fire on Saturday. However, prospects remain unclear as to whether the United States can end its longest war in history.

The victims of the terror attacks included 24 Japanese people.

Kazusada Sumiyama, 83, who lost his son Yoichi Sugiyama, a 34-year-old banker who worked at the twin towers, was not able to visit New York for the ceremony as he had done in the past because of the pandemic.

"It's very disappointing. I hope the situation will improve so that I can travel next year for the 20th anniversary," the father, who lives in Tokyo, said in a phone interview.