China is expected to double its stockpile of nuclear warheads, currently estimated to number in the low 200s, over the next decade and it is already ahead of the United States in some areas such as shipbuilding and conventional missiles, the Defense Department said Tuesday.

The latest China military power report to Congress, covering developments through the end of 2019, has been released amid a deepening feud between Washington and Beijing on matters ranging from economic to security issues, including Chinese military activities in the disputed South China Sea and U.S. support for Taiwan.

Noting that China's goal is to transform the People's Liberation Army into a "world-class" military by the end of 2049, the report said that over the next decade, China's nuclear warhead stockpile is projected to "at least double in size as China expands and modernizes its nuclear forces." 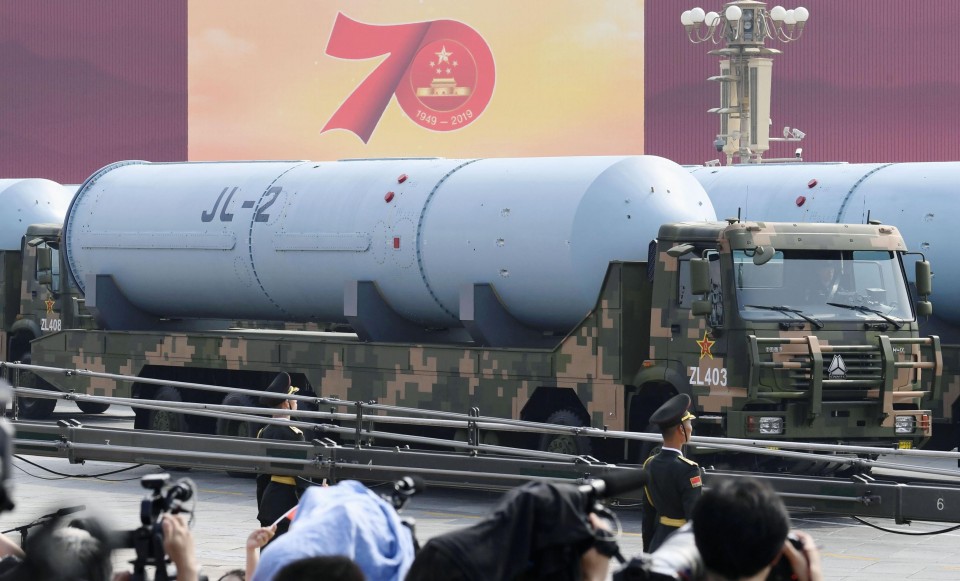 Photo taken Oct. 1, 2019, shows China's JL-2 submarine-launched ballistic missiles on display during a military parade in Beijing marking the 70th anniversary of the founding of the communist People's Republic of China. (Kyodo)

The number of warheads on China's land-based intercontinental ballistic missiles capable of threatening the United States is also expected to grow to roughly 200 in the next five years from about 100, while China is moving closer to a "nuclear triad" capability to launch nuclear strikes by land, air and sea, the report said.

The U.S. administration under President Donald Trump has been pursuing arms control measures that would involve both Russia and China, as the only remaining treaty capping the U.S. and Russian nuclear arsenals is the New Strategic Arms Reduction Treaty, set to expire in 2021.

But Beijing has rejected the idea, asserting that the two nuclear superpowers should drastically reduce their own arsenals -- believed to be roughly 6,000 nuclear warheads apiece -- before bringing other nuclear weapon states into multilateral arms control negotiations.

The report said that China has also achieved parity with, or even exceeded, the United States in several military modernization areas, including shipbuilding, land-based conventional ballistic and cruise missiles, and integrated air defense systems.

China has "the largest navy in the world," with an overall battle force of approximately 350 ships and submarines, and is "the top ship-producing nation in the world by tonnage," it said. 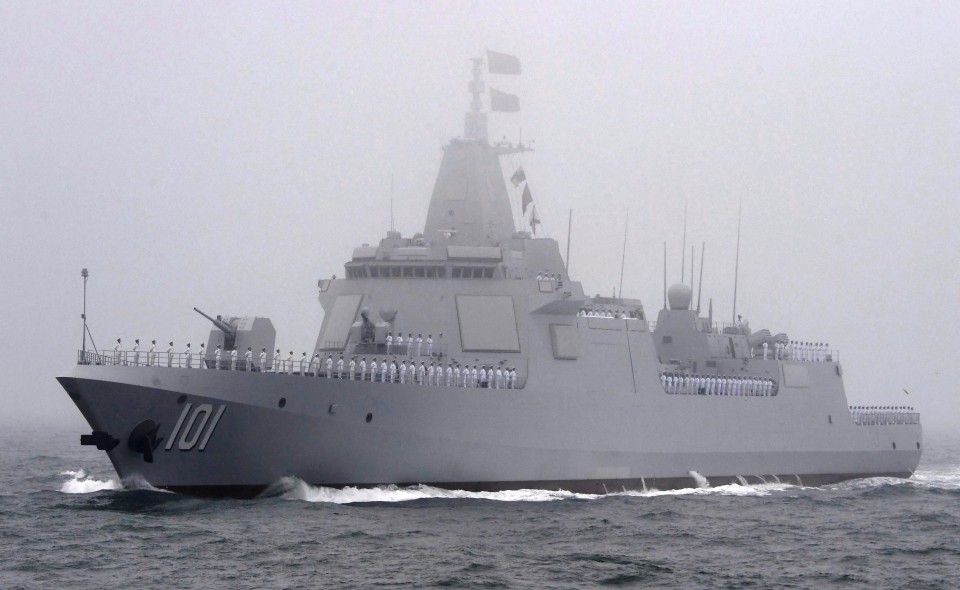 The Chinese navy unveils the upgraded version of the Type 055 destroyer off Qingdao, eastern China, on April 23, 2019, during a fleet review marking the 70th anniversary of the navy's foundation. (Kyodo)

It has also been able to develop its conventional missile forces "unrestrained by any international agreements," possessing more than 1,250 ground-launched ballistic missiles and ground-launched cruise missiles with ranges between 500 and 5,500 kilometers, according to the Defense Department.

On the East China Sea, the report pointed out that China continues to contest Japan's administration of the Senkaku Islands, which Beijing claims and calls Diaoyu, such as by sending coast guard ships near the uninhabited islets.

Last year, the People's Liberation Army conducted a nationwide exercise across its five-theater military commands, which could have been simulating a Senkaku or Taiwan contingency, the report said without elaborating.

"The United States does not take a position on sovereignty of the Senkaku Islands but recognizes Japan's administration of the islands and continues to reaffirm that the islands fall within the scope of Article 5" of the Japan-U.S. security treaty, the report said, meaning that Washington will defend Tokyo in the event of conflict over the islands.

Turning to Taiwan, the report said the relations between China and the democratic island, which Beijing views as its own, remained tense. The Chinese military continues to prepare to deter Taiwan's move toward independence and is likely preparing for "a contingency to unify Taiwan with the mainland by force," it said.