A Japan-based team of biological scientists has developed a new rice variety through genetic improvement in an attempt to increase crop yields in a salty paddy field.

The team, led by the National Agriculture and Food Research Organization, has said it succeeded in finding a gene that determines the angle of root growth, hoping the discovery will lead to more new rice varieties amid the growing risk of salt damage as a result of frequent high tides and typhoons due to global warming.

Salt damage is predicted to affect about half the world's existing arable land by 2050, with coastal areas in Japan and some other countries, including Bangladesh and Vietnam, already facing challenges, according to the team. 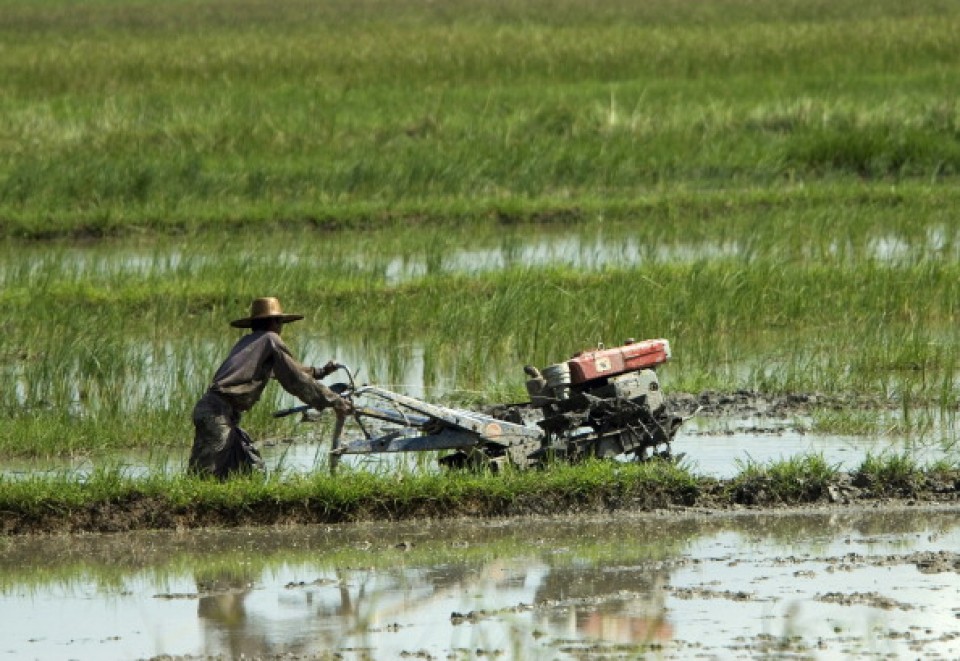 A man uses a tiller to prepare a ricefield in Myanmar. (LightRocket/Getty/Kyodo)

"By using this gene it may be possible to design how rice roots grow to suit farmland conditions," said Yusaku Uga, a principal scientist at the organization.

The gene was found in one type of Indonesian rice, whose roots grow along the surface of the ground.

Just as in a drought, soil with high levels of salinity hinders plants to uptake water. Moreover, the soil becomes too firm as a result of a large amount of salt, making them depleted of oxygen.

Presuming that rice would also be more resilient if its roots can grow along the surface of the soil, the team spent four years from 2015 monitoring how the Japanese rice Sasanishiki crossbred with the Indonesian variety produces grains in a salty paddy field, compared with ordinary Sasanishiki.

The scientists said the genetically improved rice saw a 15 percent increase in harvest in salty water. Meanwhile, it showed no difference in growth performance in a normal paddy field.

Shallower roots are also said to be advantageous for plants to uptake phosphorus which is an essential nutrient, suggesting the method could be beneficial for farmers in poverty-stricken countries and regions where fertilizers are not easily available, Uga said.

The 45-year-old scientist said the findings hold promise for other crops including corns and soybeans as they have similar genes that determine the angle of root growth.

"With further research and experiment, non-Japanese varieties resilient to salt damage could be developed, which will likely help farmers in different parts of the world who are threatened by natural disasters," he said.