Two Japanese firms will carry out a demonstration project to store carbon dioxide deep in the ground starting next year in Indonesia as part of efforts to reduce greenhouse gas emissions.

Electric Power Development Co., known as J-Power, and consulting company Japan NUS Co. are set to begin the four-year plan at Gundih gas field in Central Java Province with the cooperation of the Indonesian government and state-owned oil company PT Pertamina, according to a recent announcement by the Tokyo-based firms. 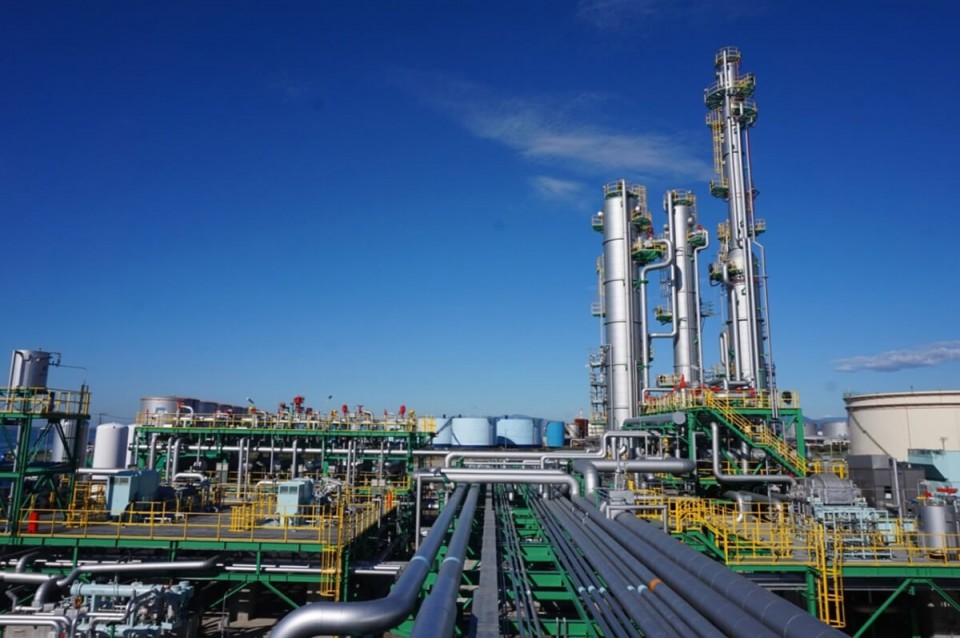 Undated Photo shows a facility for a demonstration project of capturing carbon dioxide generated at a nearbyrefinery and storing it deep in the ground in Tomakomai, Hokkaido. (Photo courtesy of Ministry of Economy, Trade and Industry)(Kyodo)

The Ministry of Economy, Trade and Industry in May picked the two firms' business proposal as an infrastructure research project aiming to be applied to the so-called Joint Crediting Mechanism, which regards Japan's contribution to greenhouse gas emission cuts by a foreign country as its own emission reductions, they said.

It will be the first such demonstration project assumed to be subject to the government's CO2 emission trading scheme, they added.

A gas pipeline with the length of about 4 kilometers will be laid between the gas field and the carbon dioxide storage site, where the project operators will dig a hole to a depth of around 3.6 kilometers to reach underground aquifers.

Costs are expected to reach several billion yen in total.

About 300,000 tons of CO2 are generated in the process of gas purification at the Gundih field and diffused into the air each year, according to J-Power.

"Due to its extremely low content ratio in the air, it's quite difficult to collect CO2 effectively from the air, but the condition to gather CO2 efficiently is already arranged there at Gundih," said a J-Power public relations official.

"So we can say the site is suitable for CCS projects," the official said, citing the acronym for carbon capture and storage.

The project will "provide an opportunity for domestic companies to promote their high-level technology" for reducing the CO2 emissions, the official said.

The result of another demonstration held on Japan's northernmost main island of Hokkaido since 2012 until last year has showed that burying CO2 costs about 6,000 yen ($57) to 7,000 yen per ton, according to the official.

The Japanese government expects the CCS project to be commercialized in 2030 at the earliest, but the viability as a business depends on whether the benefit obtained by trading of greenhouse gas emission credits would offset the cost, the official said.

According to the International Energy Agency, the percentage of coal-fired electricity generation, which is considered to exhaust a larger amount of CO2 per power generation than any other energy source, is relatively high in Asian countries.

The latest IEA data showed that thermal power generation using coal comprised about 70 percent of all electricity in 2018 in China and India, over half in Indonesia, and more than 40 percent in Malaysia and the Philippines, compared with the world's average of around 38 percent.

The IEA has said in a report that 14 percent of cumulative emission reductions from 2014 must be derived from CCS as of 2060 to achieve the 2-degree temperature cap targeted in the 2015 Paris climate agreement.

A signatory to the Paris accord, Japan has continued to target a 26 percent reduction in greenhouse gas emissions by fiscal 2030 from fiscal 2013 levels amid international criticism it is not doing enough to fight global warming.

Indonesia has set reduction goals of at least 29 percent from the business-as-usual level.

Japan to restrict travel from S. Africa over variant