Tokyo Games organizing committee CEO Toshiro Muto said Tuesday he expects an agreement with the International Olympic Committee later this month on "50 to 60 items" aimed at simplifying the postponed games.

In a press conference following an organizing committee board meeting, Muto said the items -- aimed at reducing costs and ensuring the safety of athletes and spectators -- encompassed the number of people involved in the games, infrastructure, as well as related events and ceremonies. 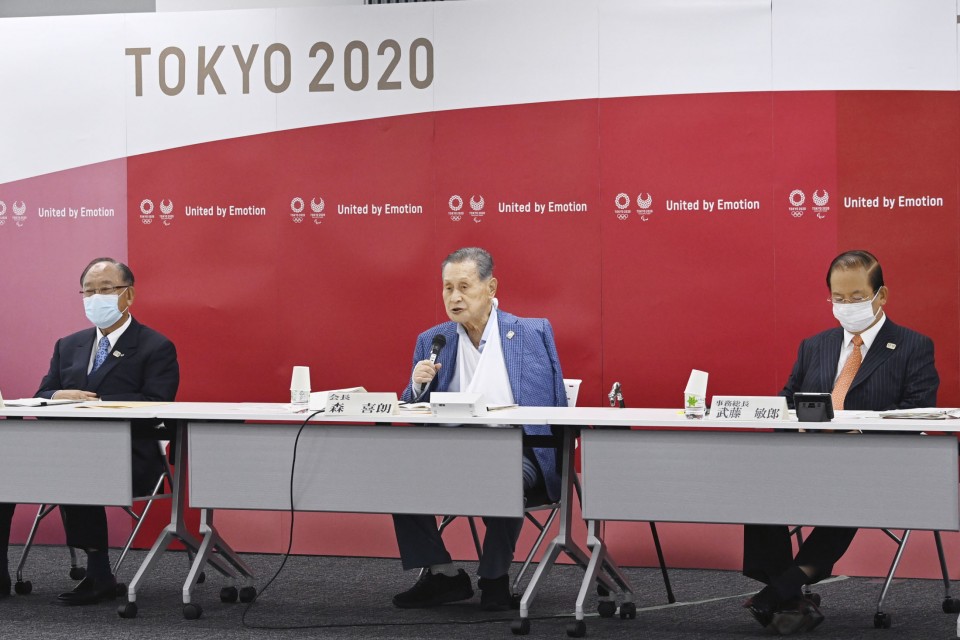 Yoshiro Mori (C), president of the Tokyo Olympic and Paralympic organizing committee, speaks at a meeting of the committee's board in Tokyo on Sept. 15, 2020, alongside Toshiro Muto (R), CEO of the committee. (Pool photo) (Kyodo)

The local organizers are scheduled to hold talks with the IOC's coordination commission on Sept. 24-25 concerning the modifications proposed following the one-year postponement of the games due to the coronavirus pandemic.

While a broad agreement on the items is expected at the meeting, the estimated costs will not be available until December, Muto said.

"We expect to have an agreement on the (50 to 60) items, but the ballpark figure on the reduction won't be available immediately because we need to thoroughly examine the numbers," he said.

Though the organizers have expressed reluctance toward reducing spectator numbers, Muto said they would "have a very thorough discussion" on the subject with the coordination commission, although any decision would also not come before December.