Family members of a group of Hong Kong people detained in mainland China after a reported botched attempt to flee Hong Kong for Taiwan sought Saturday assurances of their safety and urged their immediate return to Hong Kong.

The 12 detainees were reported to include democracy activists such as Andy Li, who was arrested for breaching a new national security law imposed in Hong Kong, and others who are freed on bail after being arrested for various offenses during the anti-government protests. 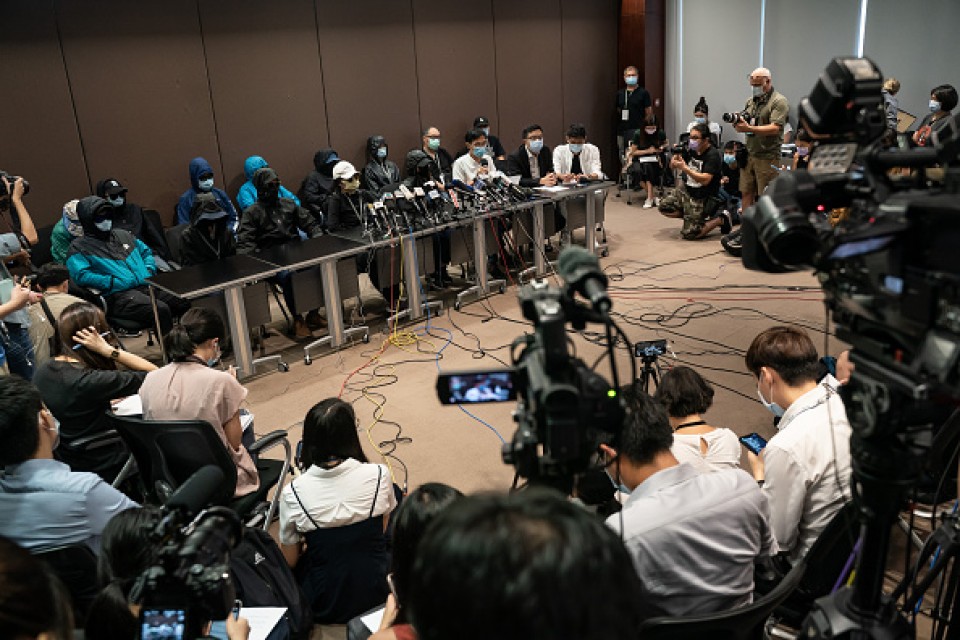 Family members of Hong Kong residents speak to press during a news conference on Sept. 12, 2020, in Hong Kong. Twelve Hong Kong people are currently detained in Guangdong province after being arrested by mainland China's coastguards for reportedly trying to flee to Taiwan. (Getty/Kyodo)

Their detainment was brought to Hong Kong authorities' attention only days after they were reportedly caught by China Coast Guard in the sea on Aug. 23 while attempting to leave Chinese waters illegally.

The families of six of the 12 were told they were detained at the Yantian detention center in southern China's Shenzhen City, while none of the detainees, including the youngest aged 16, has been allowed to meet with the family-appointed lawyers.

"The whole family is very worried. Is he safe, or is he still alive?" the mother of one of the detainees Lee Chi-yin told reporters, while concealing her identity.

She said the mainland lawyer the family have hired to represent her son was not allowed to make a visit even bearing the authentication documents required, and was told the mainland authorities have appointed a lawyer for him, whom she has no trust in.

"The government has yet to speak up for us. Hong Kong's chief executive should protect Hong Kong people but she seemed to have done nothing," she said. "I don't even dare to think of the worst situation to come."

The government leader Carrie Lam said Tuesday when asked what the government has done in assisting the 12 people that they would have to be dealt with according to mainland laws had they breached mainland offenses, before they could be returned.

The detainees could face a one-year prison term for illegal border crossing, or a maximum life sentence if they were charged and convicted of organizing human trafficking, the families have learned.

One detainee Tang Kai-yin has asthma and his mother and brother are pleading that medication be supplied for him.

"I can't sleep every night, worrying about his illness, whether he can have medicines," said Tang's mother, in tears. "I hope the Hong Kong government can help bring them back, at least I can see him. Right now, I don't even know if he is alive or dead."

In a joint letter, the families demanded self-appointed lawyers rather than government-appointed ones be representing the detainees, medications for those in need, family phone calls, the detainees' rights be ensured and their immediate return to Hong Kong.

James To, a Democratic Party lawmaker assisting the families, said the government should discuss with mainland authorities to ensure their legal right is protected.

"It is unusual for family-appointed lawyers to be discouraged (by mainland authorities) from taking the cases. The lawyers should at least be allowed to visit the detainees and be told in person that they are fired," To said. "We are very worried about their situation, whether their legal rights are protected and about their health."

He said he has asked the Hong Kong police to seek for the return of the 12, especially those who are wanted by police, while the Hong Kong representative office stationed in Guangdong Province has assured him medication for those in need are provided.

"But the office seems reluctant to pay a visit, even as a courtesy, on behalf of the families at the detention center," To said, while adding that the Immigration Department has offered to hand letters or requests from the families to mainland authorities.

The issue has caught the attention of the United States government, with U.S. Secretary of State Mike Pompeo saying Friday, "The United States is deeply concerned that 12 Hong Kong democracy activists, arrested two weeks ago off the coast of Hong Kong by Guangdong Maritime Police, have been denied access to lawyers of their choice."

"Local authorities have yet to provide information regarding their welfare, or the charges against them. We question Chief Executive Lam's stated commitment to protecting the rights of Hong Kong residents, and call on authorities to ensure due process," he said. 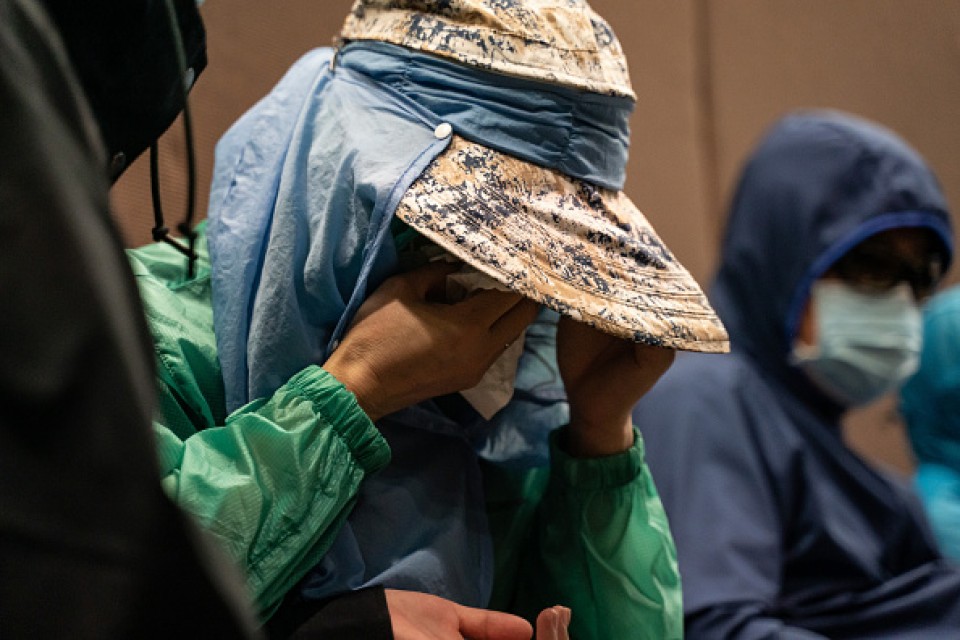 A family member of Hong Kong resident wipes away tears during a news conference on Sept. 12, 2020, in Hong Kong. Twelve Hong Kong people are currently detained in Guangdong province after being arrested by mainland China's coastguards for reportedly trying to flee to Taiwan. (Getty/Kyodo)

China responded Saturday by telling an "individual U.S. politician" to "mind his own business and immediately stop interfering in Hong Kong affairs and China's internal affairs."

The statement, issued by a spokesman of the Commissioner's Office of China's Foreign Ministry in Hong Kong, also said the "Hong Kong residents' illegal border crossing case" was still under investigation and would be handled in accordance with the law.