The global death toll from COVID-19 has surpassed 1 million, with confirmed infections at more than 33 million, a tally by Johns Hopkins University in the United States showed Monday.

The COVID-19 death toll in the nine months since the first case of novel coronavirus infection was reported to the World Health Organization exceeds the annual fatalities of around 400,000 from malaria and 690,000 from AIDS, according to the latest figures. 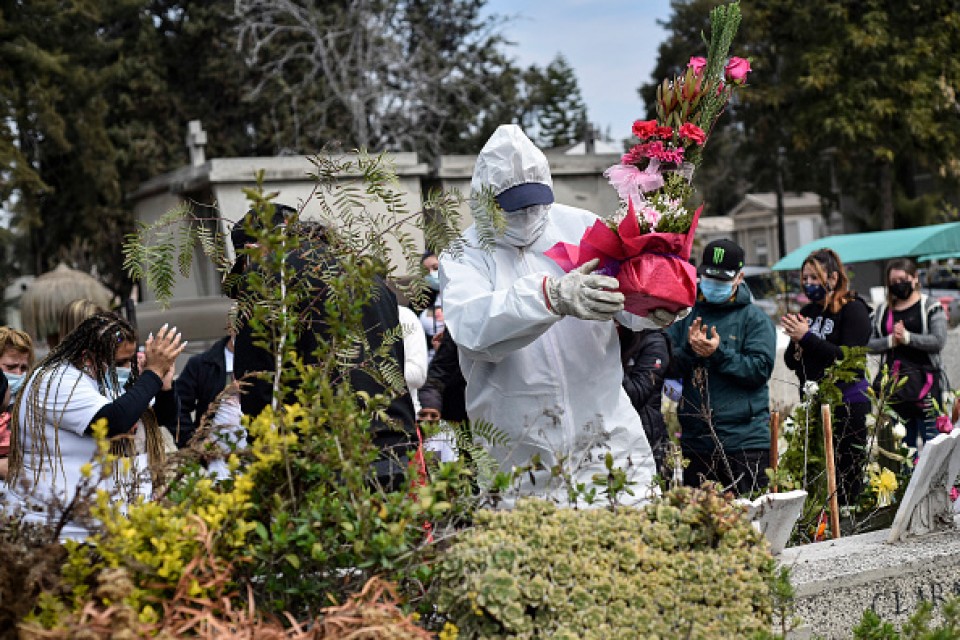 A funeral worker wearing PPE places flower arrangements as family members attend the funeral of a person who died of COVID-19, at Cementerio General on September 4, 2020 in Santiago, Chile.(Getty/Kyodo)

COVID-19 has caused 100,000 deaths every few weeks since the total topped 100,000 worldwide on April 10 and the death toll could exceed the 1.5 million annual deaths from tuberculosis by year-end.

But the weekly rate of about 30,000 to 40,000 deaths has not accelerated much since infections increased rapidly in June.

Around 2 million infections were newly confirmed in the week through Sept. 14, double the weekly increase as of June 15, whereas the death toll climbed by about 10 percent during the same period, according to WHO data.

The spread of COVID-19 has gained momentum in September, with over 300,000 new daily infections confirmed on some days, bringing the cumulative total to 30 million on Sept. 18, compared with 10 million on June 28.

India was worst-hit in September with 8,166 deaths, or 22 percent of global fatalities, the WHO's latest weekly tally as of Sept. 20 showed.