The Japan Karatedo Federation has revised its guidelines to allow the use of "kiai" shouts in the kumite sparring discipline if competitors wear a protective face shield as a measure to prevent the spread of the coronavirus.

The shield completely covers the wearer's mouth and is attached to a head guard similar to those worn by boxers and mixed martial arts fighters. 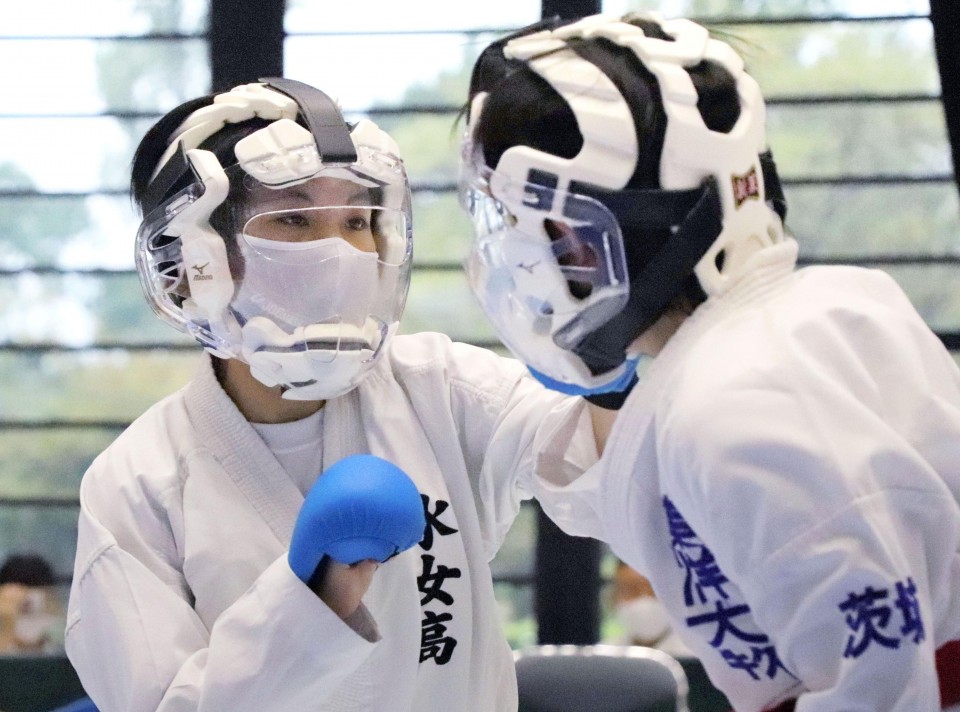 "I hope it becomes a model for fighting sports which have been struggling to hold events. It can also be useful as a reference for infection countermeasures at the Tokyo Olympics," said Yoshihiro Sasakawa, vice president of the federation.

One of the scoring criteria in kumite is based on a competitor's energy or vitality, which can be elevated through a kiai-style shout when athletes execute a technique.

The vocal practice serves a variety of purposes in martial arts including focusing energy, regulating breathing, and intimidating opponents.

One private company's survey of the face shield found that the amount of droplets expelled when shouting could be reduced by 95 to 98 percent when the apparatus is worn.

After asking athletes to refrain from uttering shouts to lower the risk of spreading the coronavirus, the JKF decided to revise its guidelines, deeming that "the risk of droplets approaches zero if both athletes competing are wearing it."

The new guidelines will be in effect for the Kanto University Championships at Tokyo's Nippon Budokan on Sunday.

The kumite discipline requires karateka to be in close contact with each other, making it difficult to prevent the spread of infection.

With international competitions on hold amid the pandemic, the measures taken by the Japanese governing body have piqued the interest of the World Karate Federation.

WKF General Secretary Toshihisa Nagura plans to observe the shield in action at a tournament and deliver a report on his findings.

Sasakawa said the face shield may prove to be "very significant if it leads to holding the uncompleted Tokyo Olympic qualifiers."

The new guidelines also specify that athletes in the kata discipline, who had been barred from making utterances during their solo performances, are now allowed to shout even if they do not wear a face shield provided they keep a certain distance away from referees and judges.

Karate will make its Olympic debut at the postponed Tokyo Games in Japan next summer with events in kumite and kata.