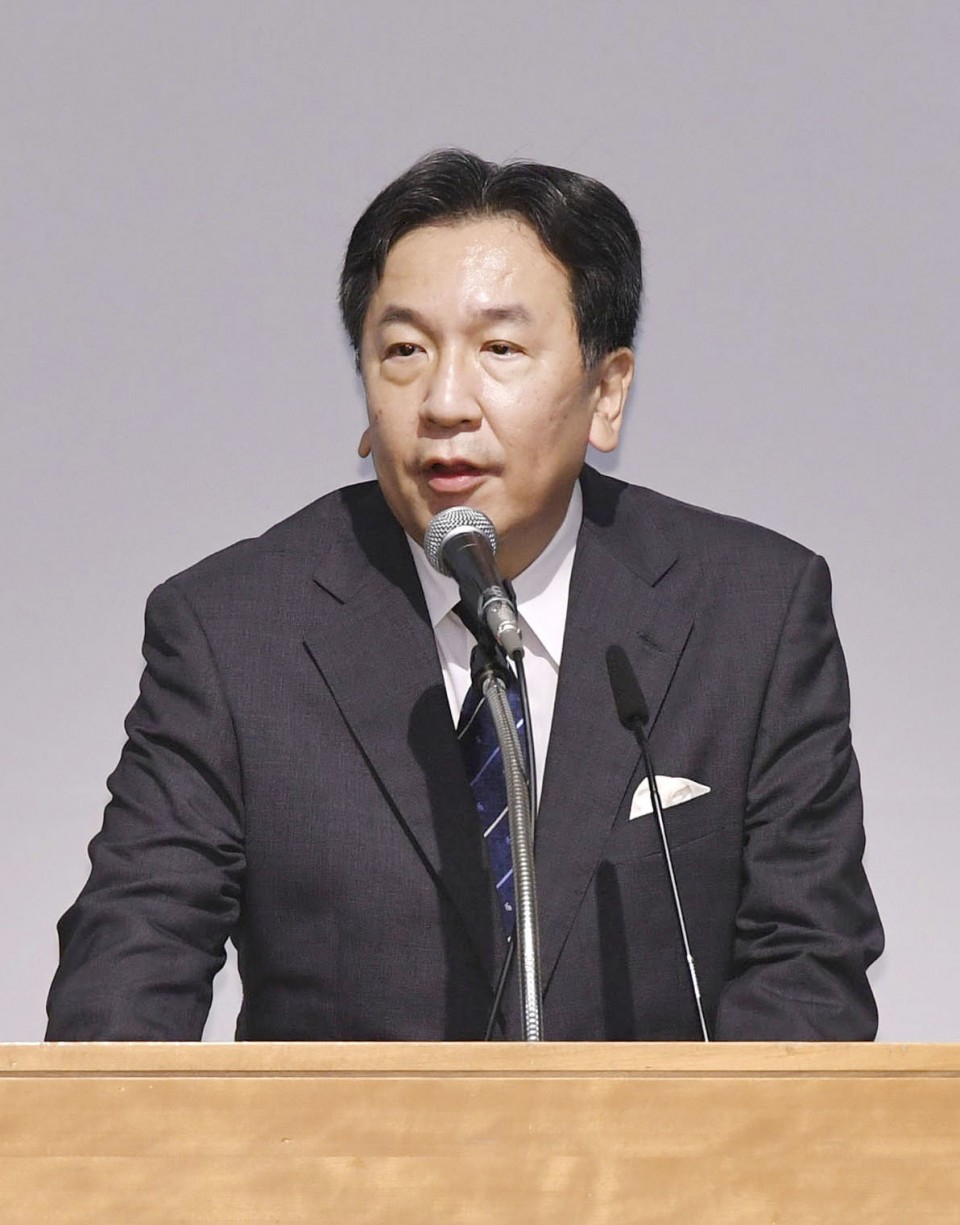 Yukio Edano, head of the Constitutional Democratic Party of Japan, makes a speech before lawmakers cast their votes to choose the leader of a new opposition party to be created through the merger of the CDPJ and the Democratic Party for the People on Sept. 10, 2020, in Tokyo. (Kyodo)

TOKYO - Yukio Edano, a 56-year-old veteran Japanese lawmaker who was the government's top spokesman at the time of the 2011 Fukushima nuclear crisis, was named Thursday as the leader of a new merged opposition party to be formed in the hope of mounting a united front against the ruling coalition.

Edano, who currently heads the liberal-minded Constitutional Democratic Party of Japan, the biggest opposition party in the country, beat Kenta Izumi, 46, policy chief of the Democratic Party for the People, in the leadership election, in which 149 Diet members who are set to join the merged party voted.

As Japan will have a new prime minister to succeed Shinzo Abe after the Liberal Democratic Party's presidential election next Monday, Edano has called for an immediate extraordinary Diet session to allow debate on how best to deal with all sorts of challenges stemming from the coronavirus pandemic.

"If (the new prime minister) avoids a full-fledged debate and if the lower house is dissolved, we will squarely accept (the challenge) and be the choice of the people," Edano told fellow Diet members upon his selection. 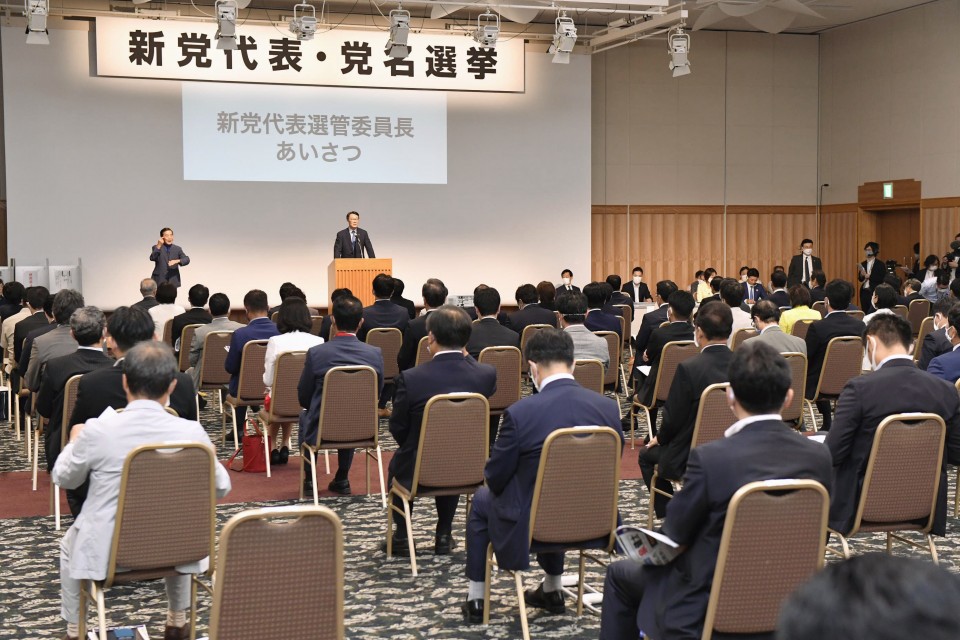 Lawmakers gather at a Tokyo hotel to cast their votes to choose the leader of a new opposition party to be created through the merger of the Constitutional Democratic Party of Japan and the Democratic Party for the People on Sept. 10, 2020. (Kyodo)

In a separate vote to decide the new party's name, the participating lawmakers decided to keep that of the largest opposition party, which currently has 89 parliamentarians.

The new party will officially be formed at a convention on Tuesday.

In his speech during the leadership election, Edano criticized the idea of a smaller government advocated by Chief Cabinet Secretary Yoshihide Suga, who is in pole position in the LDP presidential race, and what he described as the ruling party's "neoliberal" policies.

He said the new party will strengthen "public support" and be on the side of ordinary people, expressing readiness to work with other opposition lawmakers, including DPFP members who will not join the new party, against the ruling coalition.

While the new opposition party will bring together 149 members in both parliamentary chambers, it will fall well short of the more than 450 seats held by the LDP, its junior coalition partner Komeito and their supporters.

Former prime ministers Naoto Kan and Yoshihiko Noda as well as veteran politician Ichiro Ozawa, who served as LDP secretary general about three decades ago, will join the new party.

But Yuichiro Tamaki, who heads the DPFP, currently the second opposition force in the country, will not join the new party, citing policy differences with the CDPJ, and is planning to create a new group composed of 14 parliamentarians.

In the run-up to the next lower house election, Edano will be tasked with regaining public support for his party after its predecessor, the Democratic Party of Japan, disappointed voters when it was in power between 2009 and 2012.

The CDPJ and the DPFP emerged from the breakup of the Democratic Party, which was created in 2016 as the successor of the DPJ. The fragmented opposition has helped the current ruling coalition led by Abe to stay in power for the past seven years and eight months.

In the latest Kyodo News survey conducted on Tuesday and Wednesday, 48.1 percent of respondents said they plan to vote for the LDP under the proportional representation system at the next lower house election, while 15.7 percent said they would cast ballots for the new opposition party. 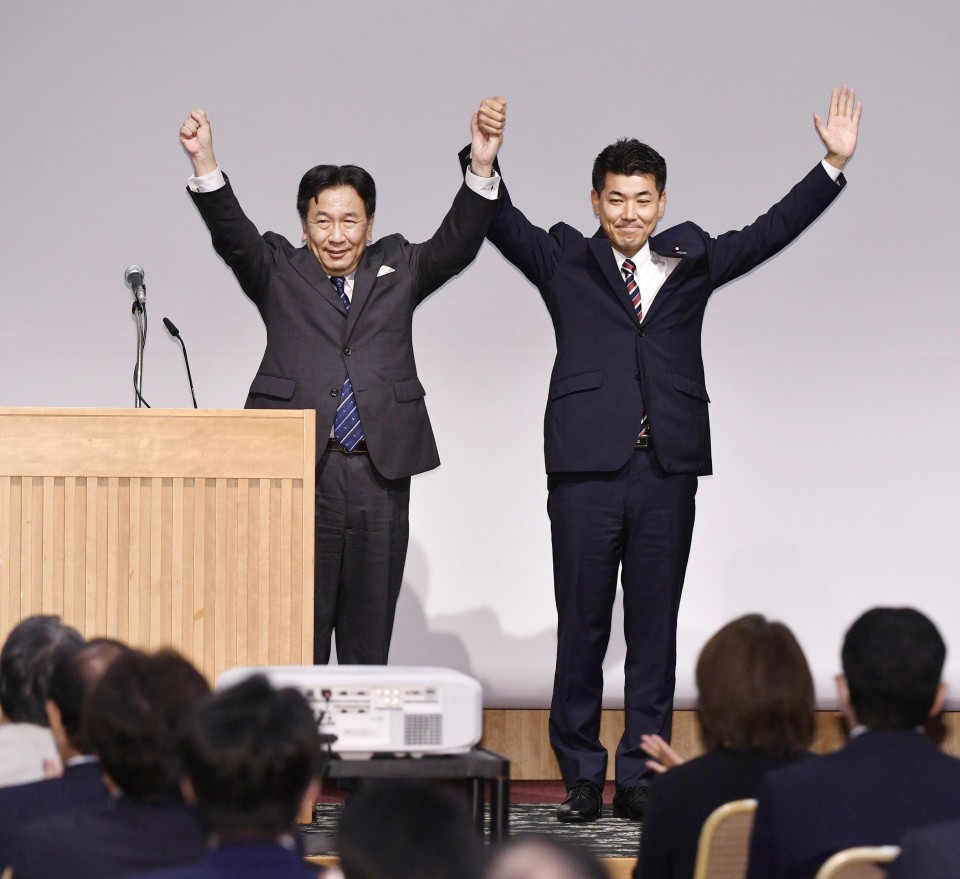 Yukio Edano (L), head of the Constitutional Democratic Party of Japan, and Kenta Izumi, policy chief of the Democratic Party for the People, acknowledge attendees in Tokyo on Sept. 10, 2020, after Edano's victory over Izumi in the leadership election for a new main opposition party to be formed through their merger. (Kyodo)