The announcement adds another twist to a power grab seven months ago by Muhyiddin after a similar shift in allegiance among lawmakers led to the collapse of the government of Prime Minister Mahathir Mohamad barely two years in the making. 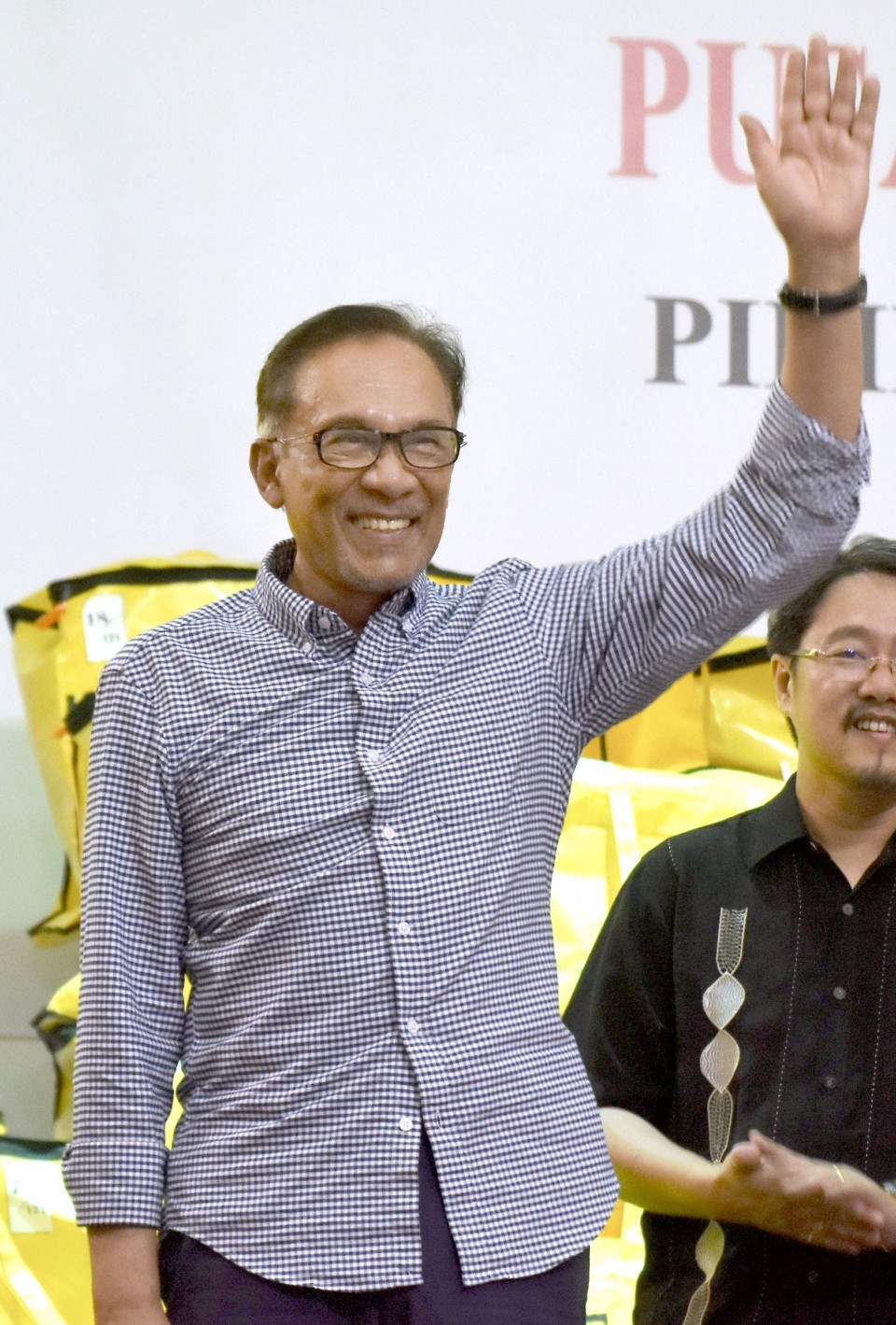 Malaysian politician Anwar Ibrahim waves to his supporters after winning a landslide victory in a by-election in the seaside resort town of Port Dickson, 50 kilometers south of Kuala Lumpur, on Oct. 13, 2018. (Kyodo)

"I have been approached by a number of MPs from various parties who expressed their deep dissatisfaction with the current leadership. They recognize that the country must have strong, stable and accountable leadership to manage the crisis," Anwar told a press conference.

"With a clear and indisputable support and majority behind me, the government led by Tan Sri Muhyiddin Yassin has fallen."

It was not immediately possible to verify his claims about the majority support. The opposition leader declined to offer details.

Together with him on stage at the press conference were his wife and fellow legislator Wan Azizah Wan Ismail and the secretary general of his party, the People's Justice Party.

Anwar said he can only reveal the number of lawmakers who support him, after meeting with the king. He said had an appointment with the king on Tuesday, but that the meeting was postponed because the monarch was admitted to the National Heart Institute, a hospital, the previous day after feeling unwell.

Anwar needs to prove to the king that he has majority support in the House of Representatives before he can claim the premiership.

Muhyiddin, however, could foil his move by recommending to the king that parliament be dissolved and a new election called.

The prime minister's ruling coalition currently commands a razor-thin majority by virtue of holding 113 seats in the 222-seat chamber.

The Hope Alliance, the opposition coalition that consists of Anwar's party and two other parties, has a total of 91 seats. The remainder of the seats are held by Mahathir's new party, other minor parties and independents.

Anwar, who has complicated history with Mahathir that goes back decades, said the former prime minister will not be in his government.

Bad blood between the two runs deep. Anwar was Mahathir's deputy during the latter's first turn as premier for 22 years until 2003. However in 1998, Anwar was convicted and jailed for sodomy and corruption, charges he insisted were trumped up to prevent him from challenging Mahathir's rule.

Both however patched up in 2016 to take on the then ruling National Front coalition in the 2018 election and unexpectedly won.

Under a pre-election pact, Mahathir was to hand over the reins to Anwar before the next election. But distrust between the two persisted, with Mahathir repeatedly casting doubt on Anwar's leadership.

Meanwhile, shortly after Anwar's announcement, Science, Technology and Innovation Minister Khairy Jamaluddin tweeted a photo with the caption saying, "Just finished the Cabinet meeting. Nothing has collapsed or fallen."