Ozeki Takakeisho and sekiwake Shodai earned their ninth wins at the Autumn Grand Sumo Tournament on Wednesday and remain in a four-way tie for the lead. 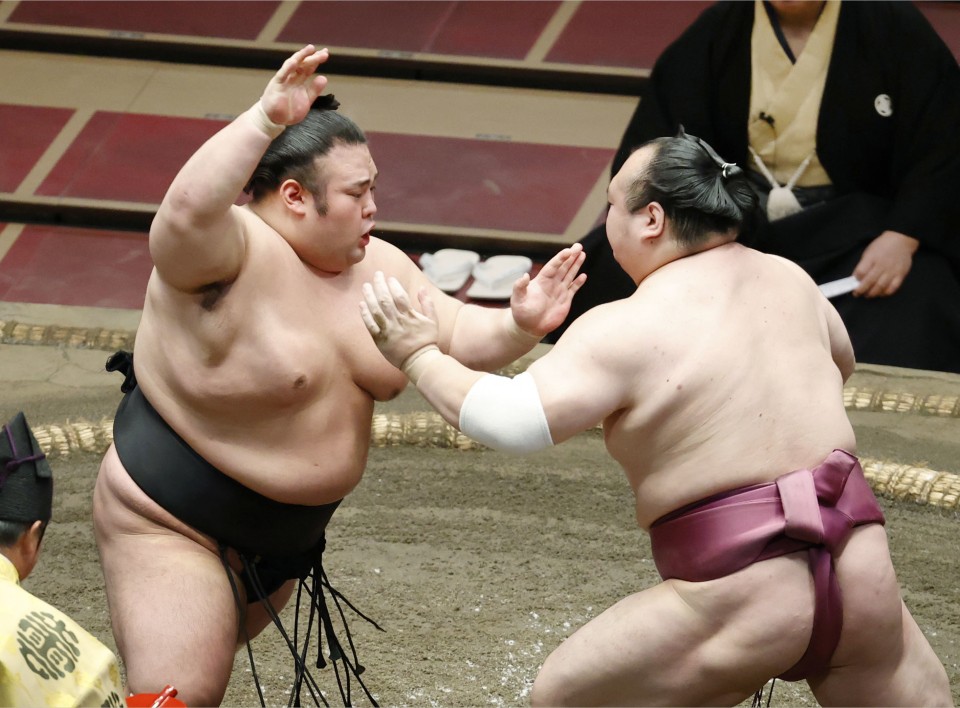 Ozeki Takakeisho (L) strong-arms Takarafuji to the edge and shoves him off the raised ring before being pulled down. (Kyodo)

With four days remaining in the 15-day tournament, the two upper-ranked wrestlers face competition from a pair of up-and-comers, No. 8 maegashira Wakatakakage and No. 14 Tobizaru, who also retained their share of first place.

Ozeki Asanoyama and No. 1 Terunofuji each secured winning records on Day 11 at Tokyo's Ryogoku Kokugikan to stay in contention for the Emperor's Cup.

In the day's penultimate bout, Takakeisho strong-armed No. 5 Takarafuji (6-5) to the edge and shoved him off the raised ring before being pulled down.

Shodai turned No. 6 Takayasu (6-5) around and forced the former ozeki to lose his footing and hit the deck.

Tobizaru defeated No. 9 Onosho (8-3) to knock down one of the overnight co-leaders and trim the group of grapplers at the top. After absorbing Onosho's aggressive shoving attack, the makuuchi rookie slapped his opponent down and shoved him off the dohyo.

With the advantage of developing alongside new sekiwake Daieisho and komusubi Endo at Oitekaze stable, Tobizaru is looking to write a page in sumo history by winning a grand tournament in his top division debut.

Wakatakakage dodged a strong initial blast from No. 11 Chiyotairyu (5-6) and earned his ninth win by push-out. After suffering a right foot injury in his first top-level tournament last November, Wakatakakage made a strong return to the makuuchi division in July with 10 wins.

Asanoyama (8-3) quickly flipped komusubi Okinoumi (3-8) down to the clay and picked up his eighth straight win. The ozeki opened with three consecutive losses but has picked up two wins by default at the meet missing both grand champions Hakuho and Kakuryu.

Terunofuji (8-3) made quick work of No. 3 Myogiryu (4-7), stonewalling a shoving attempt and forcing him over the straw bales.

Endo (3-8) fell to his sixth straight loss after getting slapped down by No. 4 Tochinoshin (5-6) as he tried to charge the Georgian out.