In the annual survey by the Agency for Cultural Affairs, 58.1 percent of respondents said in a multiple-answer question that such information should be provided in a "variety of foreign languages," while 46.3 percent said the information should be conveyed in simple Japanese for foreigners to easily understand. 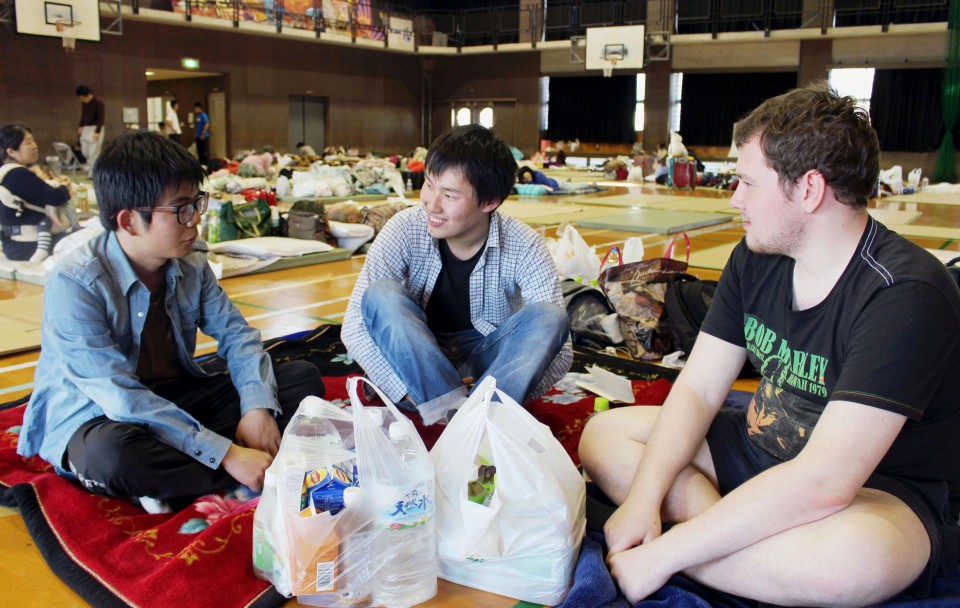 Foreign students chat in a gymnasium used as an evacuation shelter in Kumamoto, southwestern Japan, on April 17, 2016, following powerful earthquakes. The Japanese government has been confronted with the problem of a lack of support services for foreigners and a "tendency for Japanese to take precedence" in disaster preparedness planning for many municipalities. (Kyodo)

The poll also showed that 28.9 percent said they have opportunities to interact with foreigners, including casual greetings or talking while shopping.

Asked in a multiple-answer question about how they communicate with foreigners on such occasions, 51.3 percent responded they talk with gestures, followed by 44.7 percent who said using English or other foreign languages, and 43.7 percent who said speaking in simple Japanese.

The survey also found that 68.3 percent expressed hope that foreign residents have Japanese ability to the extent they do not have trouble in daily life.

It was followed by 13.1 percent hoping that such residents can exchange simple greetings, and 11.3 percent expecting them to smoothly work or study in Japan.