FEATURE: Digital nomads riding out coronavirus pandemic in a van in Japan

A free-spirited American couple with the guts to pack up and go on a moment's notice is discovering how crucial skills like agility, flexibility and resilience are in extraordinary times like these.

Liezl Van Riper, 44, and her husband Viet Nguyen, 49, took their kids out of school last fall to let them learn some life lessons on the road, their motivating mantra that spontaneous travel is the most valuable type of travel. 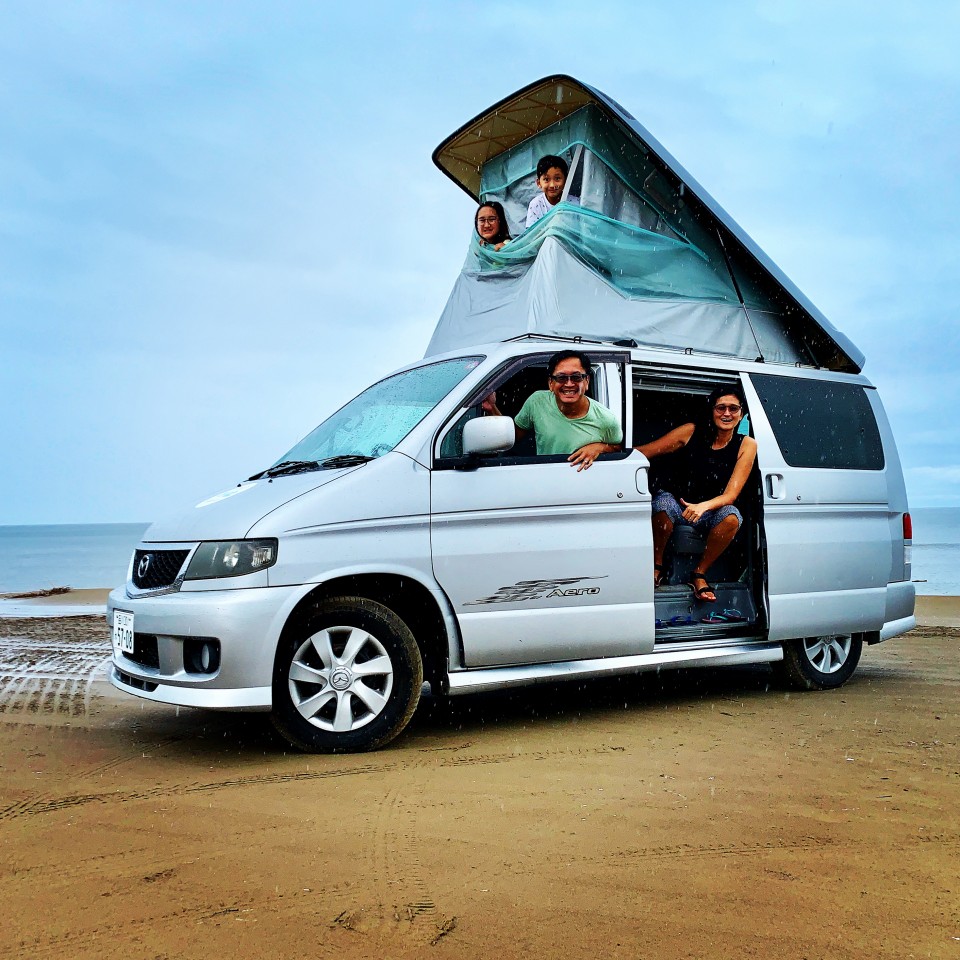 The Nguyen-Van Riper family pose for a photo in a campervan they rented during a trip in Japan in July 2020. (Photo courtesy of Liezl Van Riper)(Kyodo)

When the coronavirus pandemic changed not only their travel plans but their lives for the foreseeable future, they decided to surrender, accept and act by making a soft, if temporary, landing in Japan.

They flew to Osaka in March just as Japan tightened its border controls and the family of four has been traveling the country ever since.

"Japan was so important for this trip. It was a dream come true," says Van Riper, who lived in Saitama Prefecture, Tokyo's neighbor to the north, for 18 months around 1998 while teaching English at an eikaiwa, or conversational school.

"We saw what was happening with the borders closing in mid-March and I had a feeling that if we were going to Japan, this is it. So we dropped everything, bought the cheapest ticket from Thailand and made it into Osaka a week before the borders closed." 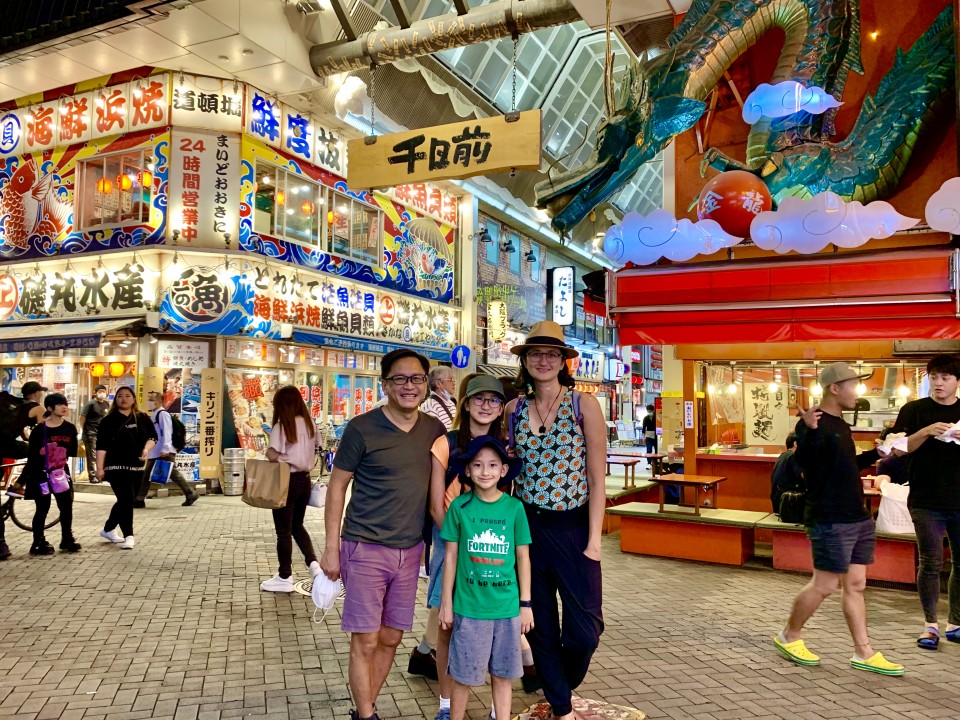 While much of the world sat at home feeling waves of fear and anxiety, the family found a bargain Airbnb listing in Kyoto and "did all the things you do in Kyoto but with no tourists," including cherry blossom viewing.

Van Riper and Nguyen rented out their home in California when they decided to worldschool their 11-year-old daughter Luna and 8-year-old son Leo. They wanted to visit their ancestral homelands in Asia and let their children experience their cultural roots up close.

Van Riper's mother is from the Philippines, and Nguyen came to the U.S. as a refugee from Vietnam. They have been together for 25 years, married for 15 of them, and lived in New York for 16 years.

"We decided this was the right year to do worldschooling," Van Riper says. "We knew when the kids were babies we wanted to travel and use the countries we were in as classrooms. But at the time virtual learning wasn't big enough. Now that it's such a normal thing, this hasn't been as difficult as it might seem."

In September, the family said goodbye to their envious friends and left the U.S. for what they expected was to be a yearlong journey.

Worldschooling is an alternative to traditional education. It is a type of homeschooling without the home, putting the emphasis on travel and real-world learning experiences to create a more holistic outcome. 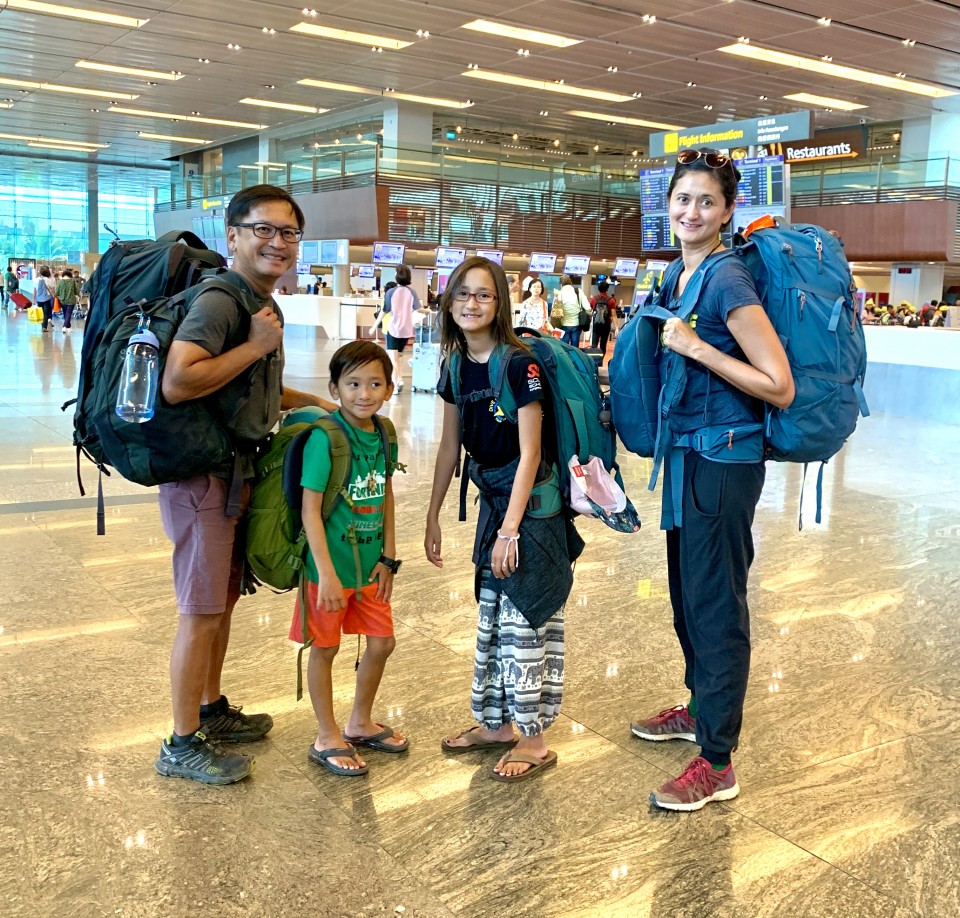 The Nguyen-Van Riper family packs lightly when traveling, as seen in this photo taken in Changi Airport in Singapore in October 2019. (Photo courtesy of Liezl Van Riper)(Kyodo)

To make their dream a reality they attended a worldschooling conference where they got tips on how to generate income, how to keep their marriage intact, and how to maximize the children's learning potential every day.

The plan was for the mom, Van Riper, to be the breadwinner as a nonprofit fundraising consultant, while the dad, Nguyen, who left his job as a vacation rental business owner, would be "home" husband and teacher.

They planned to spend up to two months in each destination -- Indonesia, Philippines, Vietnam, Singapore, Hong Kong, Thailand and Japan -- to teach the kids more about the world, culture, history, geography and society than they could ever learn in a classroom.

Halfway through their journey, when they were in Thailand, the coronavirus outbreak was declared a pandemic by the World Health Organization. In April, they found out their visitor visas in Japan would be extended for an additional 90 days beyond the initial expiration date.

"We feel so lucky to be in Japan right now at this time," Van Riper told Kyodo News from a private tatami room in a Michi no Eki roadside rest area in Miyagi Prefecture, where the family made a pit stop for an onsen and a quick bite.

"We spent 31 days in a campervan driving 6,500 kilometers around Honshu and Hokkaido, and we visited my Filipino family in Fukuoka. Next is Tokyo." 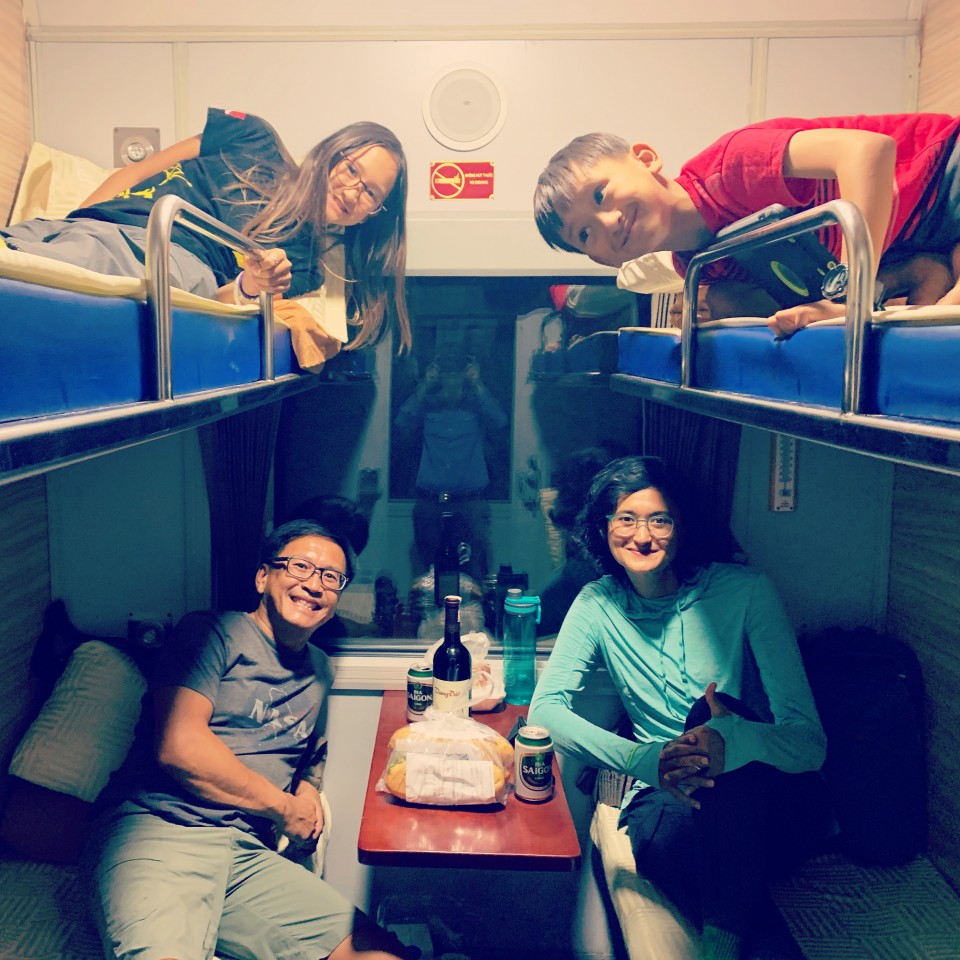 Their lack of Japanese language skills have helped them stay physically and socially distanced from the locals, and Van Riper says she does not think there is a great risk of the family catching or spreading the virus.

If they cannot extend their stay in Japan past September, they are contemplating going to Georgia, a nation in the Caucasus region that has been welcoming digital nomads by offering a new visa for self-employed, remote workers.

"What my work is, is the same work I would be doing if I went into an office. The income is just the same if we were stationed in one place," she says.

From the perspective of a student, Luna says that she feels that she is learning more now than she did in school. Of the places she recently toured are war museums in Vietnam's capital Hanoi and the Hiroshima Peace Memorial Museum in western Japan.

"I'm really enjoying it because I get to see a lot of new places and I get to experience new cultures and new food. I miss my friends, but we talk a lot online. Even if I went back to California now, I wouldn't even get to see them," she says.

Perhaps the greatest endorsement of her parents' plan was Luna's declaration that if she has kids one day, "I definitely want to travel with them, too."

To the parents, it was important their kids were old enough to remember the whole experience, but not so old they are reluctant to leave their social circle.

Van Riper says it took some time to get used to the family being together 24/7 and there are obviously days when everybody needs a break, but they solved this by figuring out ways to "take time off" by scheduling mother-daughter and father-son time.

They have all learned a lot about each other, too. Van Riper, who doesn't eat beef or pork, now knows her husband "can exist off Family Mart, 7-Eleven and Lawson for a long time. I can't," she says.

Family time has always been a priority for the tightknit clan, but the couple's fascination with traveling motivated them to take on the responsibility of their children's education.

"We get just as much out of this experience as they do. We love traveling," Nguyen says, adding that they would probably be on the road full time if they did not have kids.

Luna and Leo do not have a weekly timetable with dedicated study or homework periods, rather, their campervan life over the past month means using museums, landmarks and the outdoors as their classroom, the road determining their schedule.

Their father uses virtual school resources and various tools like podcasts to supplement the regular homeschooling curriculum, but he is concerned more with quality over quantity.

"A lot of our time together is schooling. Every parent teaches their kid, but once you homeschool, that teaching moment is always there. The online classes and reading that they're doing is important, but using the culture and places as the lessons, that's worldschooling," Nguyen says.

There are different approaches for families interested in combining education and travel. Figuring out an income stream is a good place to start, Van Riper says. Some of her homeschooling friends have four or five jobs to make ends meet.

Nguyen, who keeps expenses on track with his trusty spreadsheet, says after the downsizing the family is actually spending about half of what they did when they lived in New York City.

The monthly family budget is about $4,000 and their largest outlay comes on food. They use their rental income to help fund some of their travel.

On their Japan leg, they have learned different tips for saving money, like going to supermarkets at closing time when the staff put discount stickers on unbought bento meal boxes.

"We have no shame. We'll hover and wave until the guy comes out with the stickers," Van Riper laughs.

The ingenuity learned on their travels can be translated to working from home, too, says Van Riper.

"A lot of Americans have been forced to work from home and their companies are realizing they could have been doing this the whole time. I would say if there's anybody who's now in a newfound work-from-home situation, do it. Start traveling now. Prove to your boss that if you can do this from home, you can do this from anywhere," she says.

"What we're doing is a lot more common in North America and Europe, and our kids' teachers have been very supportive. I have a feeling it's not the same in Japan, and they may think differently about pulling kids out of school for long-term travel," she says. 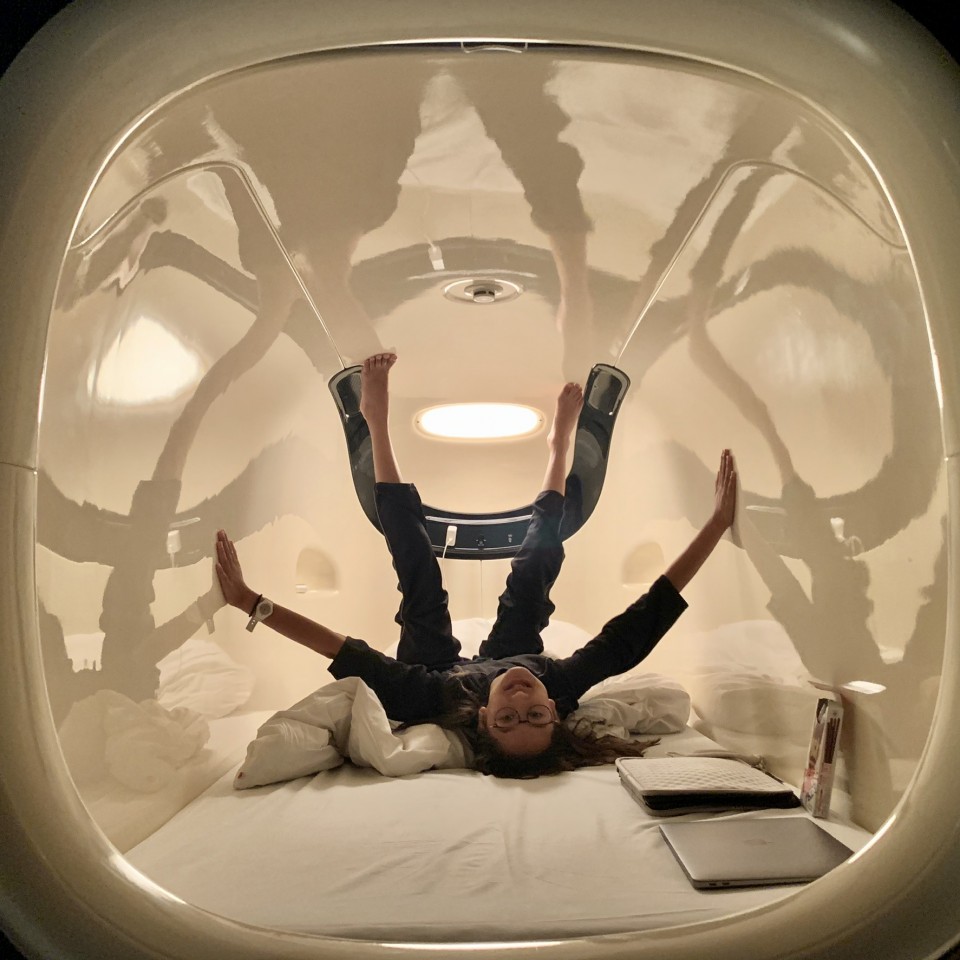 Luna Nyugen enjoys her stay at Nine Hours in Tokyo, one of few capsule hotels that allow children, on Aug. 4, 2020. She had dreamed of stying in a capsule hotel for years after seeing a video on Youtube. (Photo courtesy of Liezl Van Riper)(Kyodo)

They are exploring Tokyo life now, but as always, their travel plans are flexible. If the coronavirus infection rate is high and they don't feel safe, they'll make other plans.

"We're constantly trying to figure out what the best option is. We look at the COVID rates, we look at airfares, we think about where we can afford to go," says Nguyen, who organizes the logistics.

Van Riper sees the next three to six months as likely being dark and dismal in coronavirus-impacted America, and with the presidential election coming up in November she predicts the country will continue to be angry and divided.

"We just want to stay away while we can and be somewhere beautiful where there's peace and low infection rate. I honestly don't feel I want to be back there right now," she says.

Van Riper and Nguyen agree that the biggest takeaway from this globetrotting adventure is the context-expanding benefits of traveling, and how they have witnessed their kids soaking up the experiences like sponges.

Stepping outside their comfort zone and adapting to change and new environments helped build resilience.

"It's been an affirmation that we can do whatever we want and not be afraid," Nguyen says.

"We've had a lot of life transitions in the last three years moving out of New York, renovating a house, selling everything we have, and now traveling. If you zero in on what you want and work towards it, you'll probably achieve it like we did," he says.

Van Riper says change brings uncertainty, but uncertainty can be a gift.

"This whole new chapter of not knowing what's after Japan. We're a little afraid, and I think that's okay. We don't want any of us to have any regrets," she says. 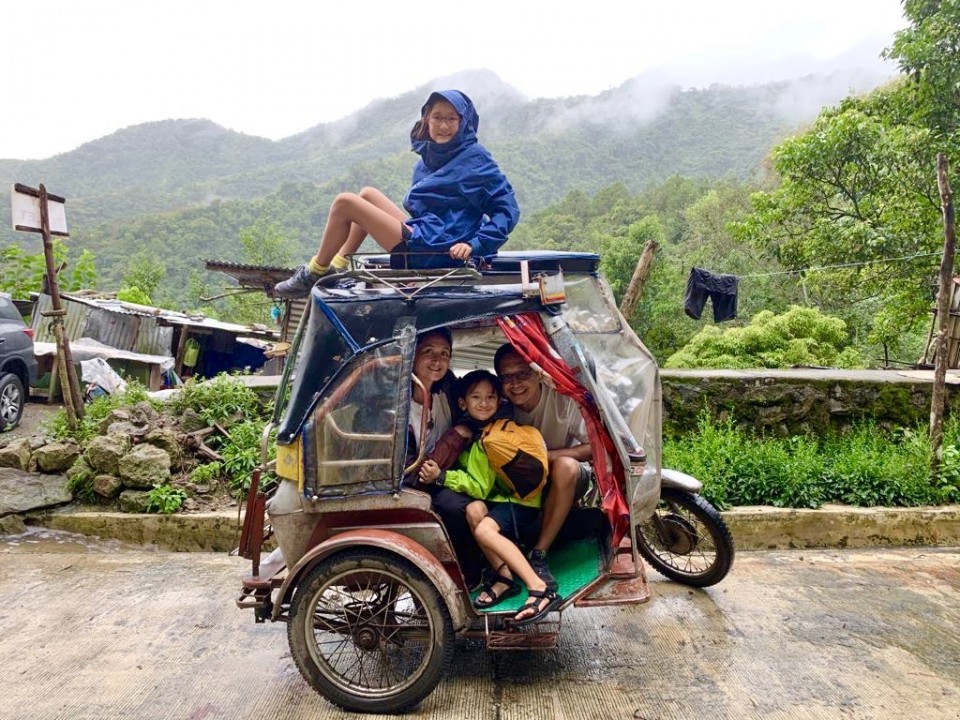