Online crowdfunding is proving a popular way for people in Japan to support small and mid-size businesses struggling to stay afloat during the novel coronavirus pandemic.

Donations, which began to increase from March, doubled in May from the previous month, according to a study by a major Japanese crowdfunding website. Amounts continue to remain high, with a total of 27.4 billion yen ($258 million) raised between January to July.

Rinko Yamada, a dairy farmer in Koka, Shiga Prefecture, is just one of many who have used crowdfunding to help their business survive since the pandemic hit. 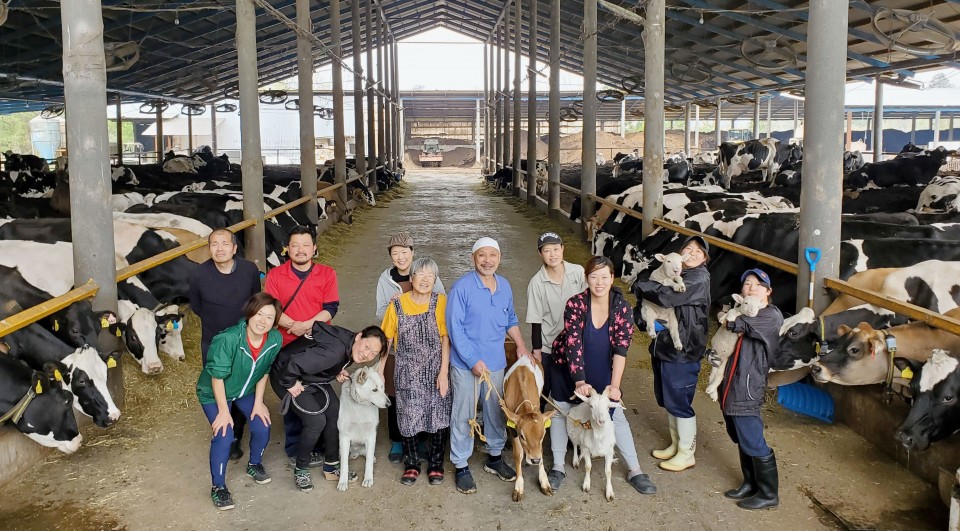 Supplied photo shows staff of Yamada Farm in Koka, Shiga Prefecture and the cows they have raised. (Kyodo)

Cut off from ways to sell Yamada Farm's dairy products after department stores began canceling events in March, the 39-year-old mulled ways to avoid wasting the approximately 30 liters of milk produced every day by each of the 120 or so cows raised at the farm.

She hit on the idea of crowdfunding and launched a campaign in May with a goal of raising 1 million yen, providing milk and dairy products as return gifts. She reached her target in just a few days.

By the end of June, Yamada had collected around 2.1 million yen from around 400 donors. The funds were used to help pay for cow feed and wages for workers, and some supporters even visited the farm for the first time thanks to the campaign.

The appeal of crowdfunding is that supporters can easily pledge small amounts, and anyone can initiate a campaign once they pass the platform's screening. In Japan, the concept took off in 2011 after it was used to collect donations in the wake of the Great East Japan Earthquake.

Over 2,900 projects have been listed under the program to date, with a total of 7.16 billion yen collected from around 620,000 donors.

Entire industries have also banded together to fundraise. In April, movie directors and others in the entertainment industry started a "Mini-Theater Aid" fund to save indie theaters across the country.

The approximately 331 million yen collected through the crowdfunding initiative was later distributed to over 100 cinemas.

But with movie theaters still limiting the number of seats they sell to around half the venue's capacity, the future looks bleak. Due to such difficulties, Yujiku Asagaya, an arthouse cinema in Tokyo's Suginami Ward, suspended business from Saturday.

Tsunehisa Inoue, the manager of Cine Wind, a small movie theater in Niigata Prefecture that managed to raise 15 million yen from a fundraiser for operational costs, has welcomed the alternative financing method.

"I was happy to receive messages from supporters. I want to do whatever it takes to keep running so I can meet their expectations," he said.