Japan to keep limiting people allowed at events to 5,000

TOKYO - Japan is planning to keep limiting the maximum number of spectators at concerts, professional sports and other events to 5,000 as the spread of the novel coronavirus continues in various parts of the country, government officials said Friday.

The government had initially planned to impose the restriction until the end of August, after the number of people allowed to gather at venues for big events was increased to a maximum 5,000 on July 10 from the previous 1,000. 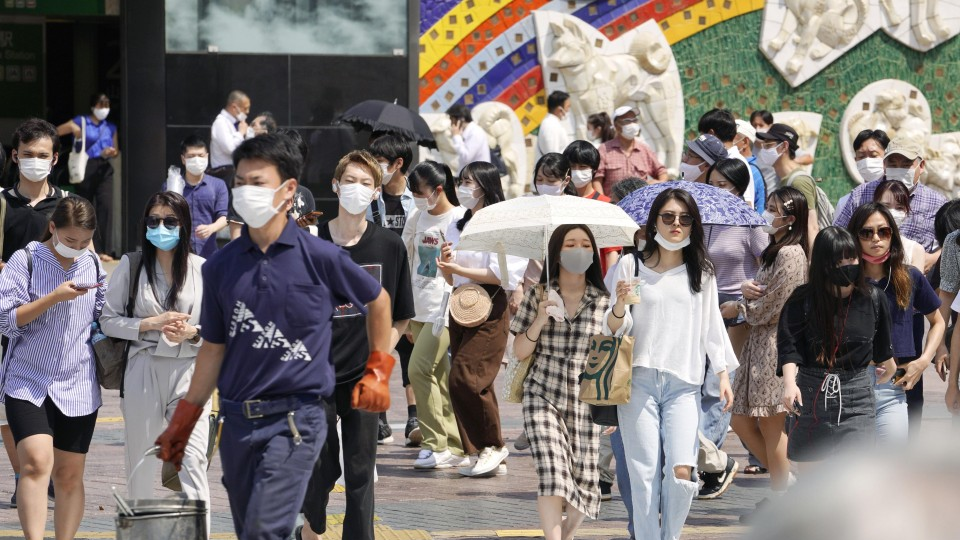 People wearing face masks due to the coronavirus pandemic walk in the summer heat in Tokyo's Shibuya area on Aug. 12, 2020. (Kyodo)

The government is intending to formally approve the extension of the cap by convening a subcommittee meeting of its coronavirus task force at an early date, according to the officials, who spoke on condition of anonymity.

On Friday, Tokyo reported 389 new cases of the coronavirus, the highest figure in about one week, with urban and tourist areas in Japan continuing to see a relatively large number of infections during the peak of the summer holiday season.

The single-day figure, compared with 206 reported Thursday, topped the 300-mark for the first time since Sunday. It is the highest since Saturday, when the metropolitan government confirmed 429 more cases of the virus.

Tokyo's cumulative total stood at 17,069. The high number of cases is believed to have reflected a rise in the number of people who were tested, from some 1,000 to 6,000, after a three-day holiday ended Monday.

Of Friday's tally in Tokyo, cases involving people in their 20s and 30s accounted for about 58 percent, the metropolitan government said, adding roughly 62 percent had unknown transmission routes.

To prevent the spread of the virus, Tokyo Gov. Yuriko Koike has urged people to avoid traveling or returning to their hometowns during the holidays.

She has also requested that establishments serving alcohol and karaoke venues close by 10 p.m. through the end of August.