U.S. Health and Human Services Secretary Alex Azar on Tuesday sharply criticized China for excluding Taiwan from the World Health Organization, saying the self-ruled island has a lot to offer on important issues like health.

As the highest-level U.S. Cabinet official to visit since Washington switched diplomatic recognition to China in 1979, Azar told reporters before meeting Taiwan Foreign Minister Joseph Wu at a Taipei hotel that he is here to bring greetings from U.S. President Donald Trump and to recognize Taiwan's health leadership. 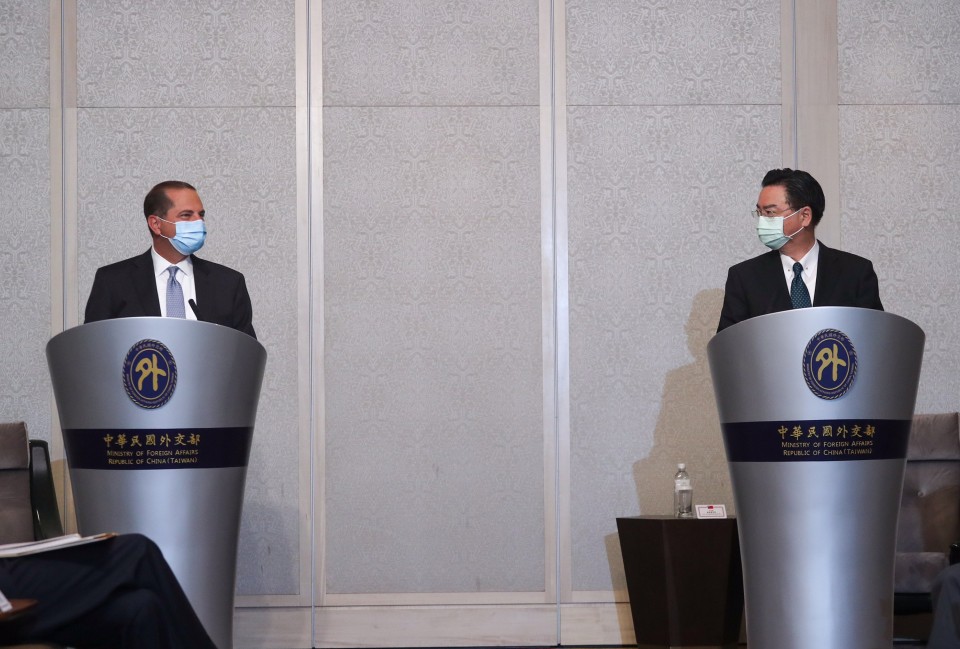 Saying he has been a witness to the "harmful and counterproductive results" of excluding Taiwan from international settings, Azar gave the example of Taiwan's donation in early 2018 in response to the WHO's urgent call for funding the global fight against an Ebola outbreak in the Democratic Republic of the Congo.

Taiwan offered US$1 million dollars, but "the political bullying over Taiwan's status at WHO ended up making this donation impossible."

"Especially during a pandemic, but at all times, international organizations should not be places to play politics," Azar said.

Instead, they must be venues for constructive, open dialogue and cooperation, Azar said, adding that the spirit of openness is what has guided Taiwan's response to the pandemic and the United States recognizes that achievement.

Azar praised Taiwan's response to the COVID-19 pandemic for not only being a model for the world, but also coming to the aid of its neighbors under the slogan that "Taiwan can help, Taiwan is helping."

"The United States believes that Taiwan's accomplishments should be recognized on the world stage," Azar said, adding that Taiwan should be able to share these lessons and its world-class expertise in international forums including the WHO, from which it has been excluded as an observer for the last four years.

Wu said Azar's visit could not be more timely as much of the world is still in the first wave of the pandemic and bracing for a second wave of infections.

Commenting on Beijing's efforts to exclude Taiwan from the world stage, Wu said in English that Taiwan is familiar with Chinese suppressive acts, describing them as "our daily adventures."

However, Wu pointed out that daily life in Taiwan has become increasingly difficult "as China continues to pressure Taiwan into accepting its political conditions, conditions that will turn Taiwan into the next Hong Kong."

Fortunately, Taiwan has good friends like the United States to help its fight for international space, which Wu said is "not just about Taiwan's status, but about sustaining democracy in the face of authoritarian aggression."

Taiwan's response to COVID-19, Wu said, showcases "how an open society could deploy democracy and transparency in its combat against virus."

"In contrast to an authoritarian model where the authority is too crippled to disclose fact, in the transparent Taiwan Model, we simply cannot afford to lie or to conceal," he said.

While faring well in containing the pandemic, Wu said Taiwan has offered assistance, donating 51 million surgical masks worldwide, including more than 10 million to the United States, and other kinds of personal protective equipment.

"And we asked for nothing in return," Wu said, revealing that some of the deliveries must be made secret to "keep the recipients free from trouble, trouble from Beijing."

In a speech later in the day, Azar lavished more praise on his host, saying, "In these trying times, the United States knows that we will always have a friend in Taiwan, and we will not shy away from telling the rest of the world that they can rely on Taiwan too."

He noted how Taiwan has developed strong relations with a number of Pacific island nations, sending supplies and direct technical assistance to help these them control their own epidemics.

His talk was attended by the ambassadors of the Marshall Islands, Nauru, Palau, and Tuvalu -- all diplomatic allies of Taiwan - whom he thanked for their "willingness to speak up for Taiwan in international fora."