Yulianus Junin, an 18-year-old on a remote Indonesian island, was not the best in his class. Nor did he come from a financially stable home. But that didn't stop him from dreaming of going to university and improving his family's circumstances.

To realize that dream, Junin, who had just graduated from high school, would walk almost every day to a forest 2 kilometers from his remote village in Watu Lanur on eastern Indonesia's Flores Island. 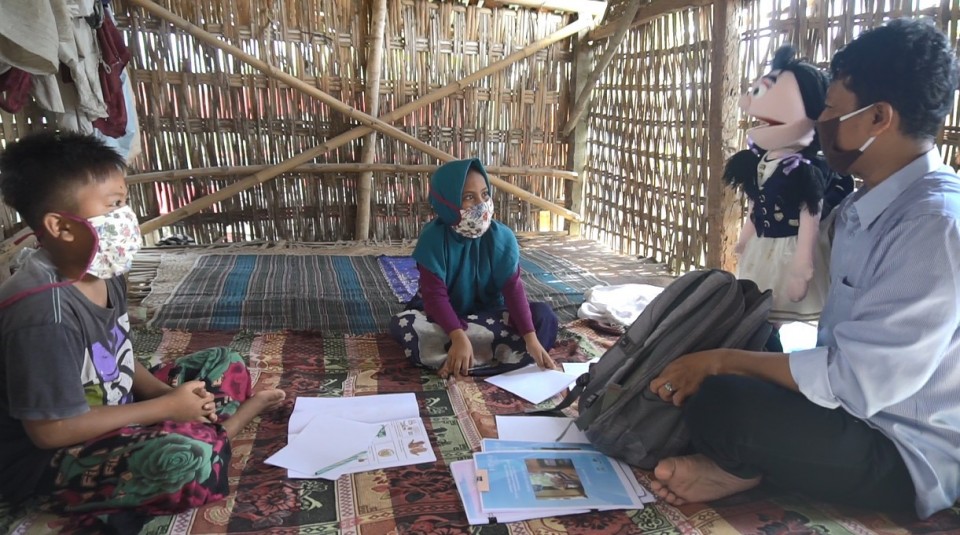 Avan Fathurrahman (R) uses a doll to make learning fun during a home lesson on Madura Island, Indonesia, off the northeastern coast of Java, on July 27, 2020. (Photo courtesy of Avan Fathurrahman)(Kyodo)

There, he would climb a 5-meter-high jackfruit tree to catch a phone signal and study for a couple of hours with materials he downloaded to his simple smartphone.

Junin had no other choice.

Like millions of other students living in isolated, remote areas across Indonesia, he found access to the internet to be a luxury.

Many of these students cannot afford to buy smartphones. Even if they can, getting a good signal is a constant challenge. They often have to climb trees, go up hills or sit on rooftops.

"Signals on the tree are stronger," Junin said recently upon arrival on the resort island of Bali, where he took a nationwide entrance examination for public universities. Telephone interviews with him from his village had been stymied by bad signals.

When the Indonesian government started to impose a "study at home" policy in March due to the coronavirus pandemic, many students from remote parts of the country faced the harsh reality that poverty and underdevelopment block their access to education.

They have been forced to undertake remote learning without computers or sophisticated smartphones.

Knowing that all of her students have Facebook accounts, Junin's math teacher Bernadeta Serlin had shared school materials online and asked them to send their tasks and homework back to her via the social media service's messenger app.

But she realized that something was wrong when her students were late sending their homework back or didn't send it at all.

"Not all of my students have a smartphone or computer...and those who don't have to borrow one from their friends," the 35-year-old teacher said.

Most of her pupils' parents work as farmers at coffee, coconut and banana plantations with a monthly household income of less than $41. So, for many, buying a smartphone would not be the first thing that comes to mind.

A similar problem has vexed Avan Fathurrahman, an elementary school teacher in the village of Batuputih Laok on Madura Island, off the northeastern coast of Java Island.

"The majority of my students don't have smartphones to do online learning because their parents are poor. If they have a phone, they only have simple mobile phones, which are not smart," the 40-year-old said.

Most of his pupils' parents also work as laborers in rice fields. They must leave very early each morning and only return late in the afternoon, making it almost impossible for them to be there for their children while they study at home.

Some parents are also illiterate.

"Even when they are at home, they can't do anything for their children because they can't write or read," Fathurrahman said.

Not being able to teach their students from a distance, both Serlin and Fathurrahman resorted to a measure not recommended by the government during the pandemic -- visiting their students at home.

The decision was a big dilemma for Fathurrahman. 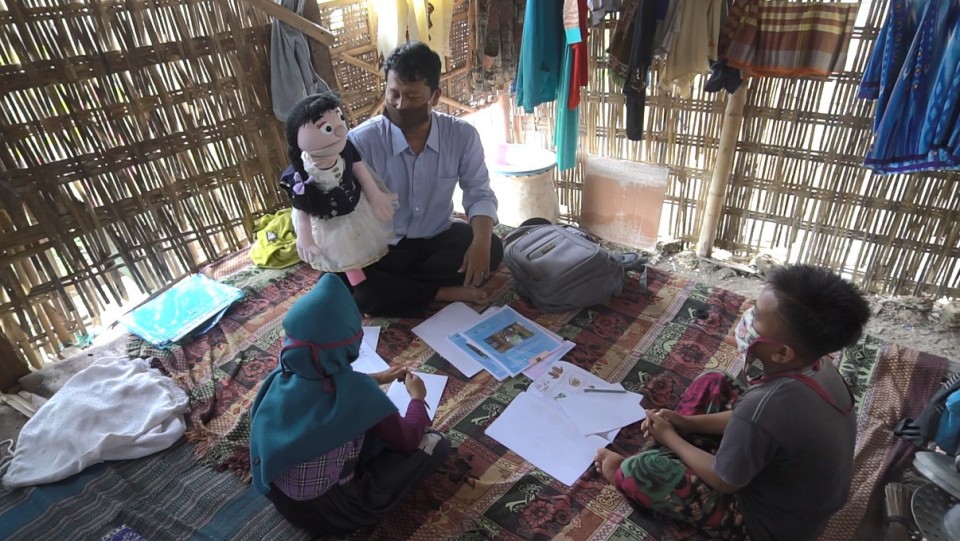 Avan Fathurrahman (C) uses a doll to make learning fun during a lesson at a child's home on Madura Island, Indonesia, off the northeastern coast of Java, on July 27, 2020. (Photo courtesy of Avan Fathurrahman)(Kyodo)

"On one side, I have to obey the government's decision regarding working and studying at home. But after some time, I realized that I couldn't do that because of the limited resources available to my pupils," he said.

Most of them do not even have TVs. This means they cannot watch lessons broadcast on a state-owned television network to help students without smartphones or internet access, or who cannot get good cellphone signals.

Every day, riding her motorcycle and carrying a whiteboard and some sheets of paper, Serlin visits four of her students at their homes. An average of three students gather in each home to study together from 8 a.m. to noon, Monday to Friday.

The teacher is responsible for 35 students, which means each student gets only one math lesson less than an hour long every other week.

She has less face time with them when it rains and the roads are bad.

Fathurrahman has buzzed around on his motorbike since late March to reach his pupils. On his way from house to house, he also braves slippery, muddy roads when it rains, and is sometimes forced to park and walk.

When the weather is good, he can travel to eight to 11 students a day for a 20-to-25-minute lesson each. But during bad weather, he can only visit five to seven students because access to their houses is not good and worsens in bad weather.

Many of his students are bored of studying at home, so he carries with him some encyclopedias and children's books they can borrow. Meanwhile, to entertain younger children, he tells stories using a doll called Kia.

Data from the Ministry of Education and Culture shows that as of April, 40,779 elementary and high schools across the archipelago did not have access to the internet, while 7,552 or about 3 percent did not have electricity.

"My village only had an electrical grid installed in February and until that month, we used kerosene pressure lanterns or generators," Junin, the 18-year-old, said.

According to Statistics Indonesia, only 54 percent of students between five and 14 years old have access to the internet and only 24 percent have computers.

The coronavirus pandemic, coming on top of the digital gap, has left disadvantaged students further marginalized when they are forced to study online.

While agreeing that online learning is appropriate during the pandemic, Fathurrahman and Serlin believe there needs to be some flexibility involved.

"The policy needs to be adjusted because students, like my own, come from low-income families and live in far-flung, remote areas," Fathurrahman said.

With that in mind, both he and Serlin have taken it upon themselves to find their own solutions so that their students don't lose out even more.