The planned marriage between Princess Mako, a niece of Emperor Naruhito, and her boyfriend Kei Komuro remains up in the air amid the novel coronavirus pandemic, two years after Komuro began studying at a New York law school.

The wedding was originally scheduled to take place in 2018, but was postponed for two years following a string of reports that Komuro's mother was having a dispute with her former fiance over money, including her son's educational expenses, which the man was shouldering. 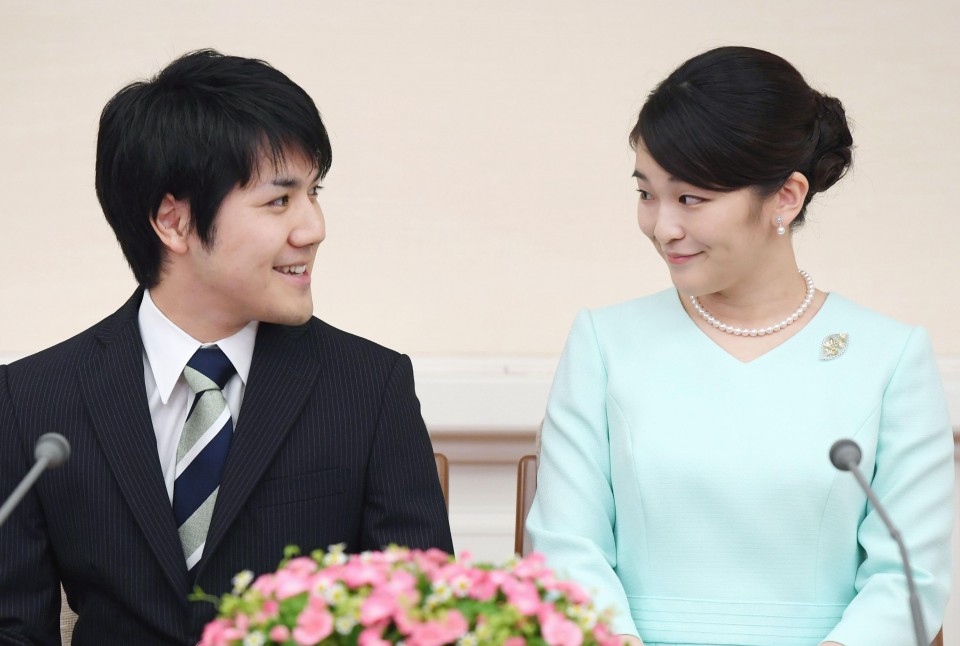 Japanese Princess Mako and her longtime boyfriend Kei Komuro look at each other during a news conference in Tokyo'on Sept. 3, 2017. (Kyodo)

The couple, both 28, has yet to make any official announcements about their wedding plans.

The eldest daughter of Crown Prince Fumihito and her boyfriend from university days announced their planned engagement in September 2017.

But the Imperial Household Agency said in February 2018 the couple would delay their marriage, which would have taken place on Nov. 4 that year, until 2020, saying the two needed more time to prepare.

Komuro, who enrolled in law school at Fordham University in August 2018, has taken online classes amid the pandemic. He has done internships and wrote a report on crowdfunding that was published in a local legal journal.

He is planning to take the bar exam in the United States after finishing his studies at the university next year.

According to a source familiar with the couple, they still plan to get married and frequently communicate with each other through video calls.

At a press conference last November, the crown prince, the emperor's younger brother, urged Princess Mako to update the public on her marriage to Komuro by February 2020.

The princess's father had asked Komuro's family to resolve their outstanding issues if they wanted the wedding to go ahead, saying the couple's marriage should be something that is "celebrated by many people."

But the coronavirus pandemic, which also led to the postponement of an event originally slated for mid-April for proclaiming the crown prince's new status as first in line to the Chrysanthemum Throne, has left the outlook for the princess' marriage plans even murkier.

Asked about the princess' wedding plans at press conferences earlier this year, Takaharu Kachi, an aide to the crown prince and his family at the Imperial Household Agency, has merely said, "An announcement will be made sometime in the future."

Meanwhile, the crown prince, Princess Mako and her sister Princess Kako have been attending online lectures by specialists on the impact of the virus pandemic.

"We are now in a difficult time and the 'Rikkoshi no rei' ceremonies (to proclaim the crown prince's status) have been postponed indefinitely," an official of the Imperial Household Agency said. "We are unable to anticipate (developments regarding the wedding) because of the unexpected coronavirus pandemic."