Indonesia to close doors to foreign tourists until vaccine found

Indonesia will continue not to open its doors to foreign tourists until a new coronavirus vaccine is found and immunity can be provided, a government official said Saturday, as the hard-hit country is conducting clinical testing for a vaccine.

"The reopening of tourist destinations to foreign tourists is something positive, but we need to do it at the right time," Erick Thohir, chief of Indonesia's national economic and COVID-19 recovery team, told a virtual public discussion. 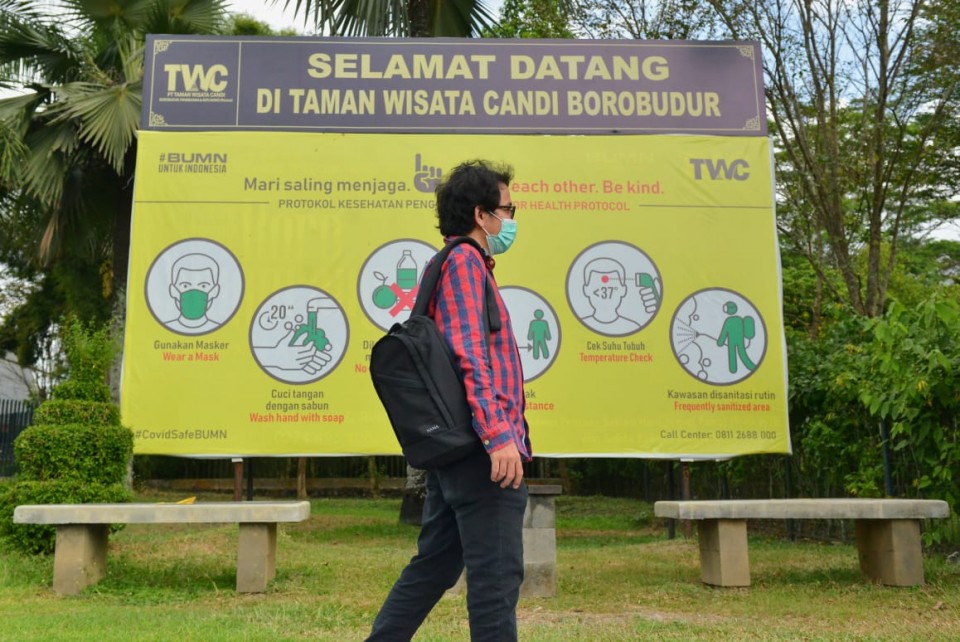 An Indonesian tourist walks in the complex of Buddhist temple Borobudur, one of the country's popular tourist destinations, in Magelang Regency in Central Java Province on Aug. 6, 2020. (Photo courtesy of the Ministry of Tourism and Creative Economy) (Kyodo)

Since Tuesday, Indonesia has been conducting the final, phase 3 clinical testing for a COVID-19 vaccine candidate in the West Java provincial capital of Bandung.

The clinical trial is taking place with the cooperation of Chinese-based drug maker Sinovac Biotech Ltd. and a team of Indonesian scientists and researchers, as well as Indonesian state-owned drug maker PT Bio Farma which have developed the vaccine candidate.

Once clinical testing for about six and a half months is completed, vaccine production will immediately start and pave the way to offering immunity to the general public.

According to Thohir, who is also state-owned enterprises minister, the government did not want its efforts to mitigate the novel coronavirus pandemic undermined by the reopening of its borders to tourists to avoid creating new clusters.

Acknowledging that immunity may only start next year, Thohir said reopening the country's borders to foreign travelers must go hand in hand with producing immunity so as not to start again from scratch.

"Therefore, for the time being, we are still reviewing the plan to reopen (Indonesia) for foreign tourists," he said.

As of Friday noon, Indonesia reported 2,307 new confirmed cases of the coronavirus, bringing the total number of cases to 135,123 with 6,021 fatalities.

The government has slowly reopened some tourist destinations for domestic tourists despite the continued high risk of the new coronavirus spreading.

Recovery of domestic tourism has been the first target before the country reopens to tourists from abroad.

Indonesia is also in negotiations with some countries to set up travel corridors for business travelers. Indonesia has reached agreements with South Korea and the United Arab Emirates for such travel bubbles.

The tourism sector in Indonesia faces potential losses of $4 billion due to the drastic decline in foreign tourists and 60 trillion rupiah ($4 billion) due to fewer domestic tourists from January to April.