Republican President Donald Trump is in deep trouble just three months before the election, as the coronavirus pandemic has shown a resurgence in the United States in what could be the clearest sign yet of his failure in handling the public health crisis.

Recent national polls suggest that Trump, who trails his Democratic rival Joe Biden, is less trusted on a range of issues he is facing, including the response to the pandemic, racial inequality and even the economy, which was long seen as the incumbent's strong point. 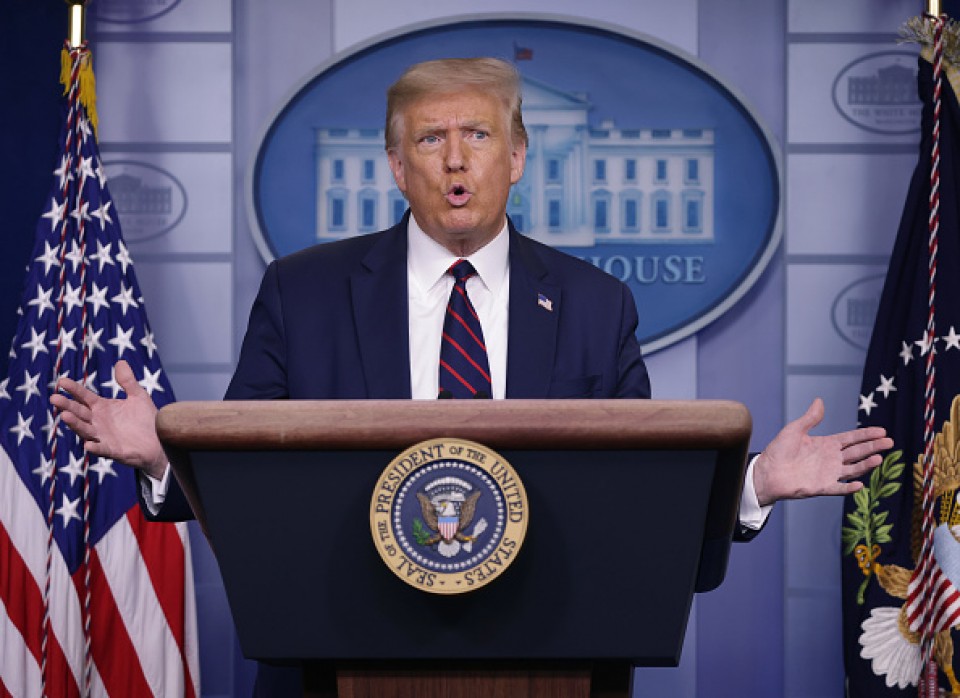 U.S. President Donald Trump speaks during a news conference in the James Brady Briefing Room of the White House July 30, 2020, in Washington. (Getty/Kyodo)

"Donald Trump has been pretty much in freefall," Elaine Kamarck, an expert on U.S. politics at the Brookings Institution, said in a recent webinar, attributing the downward spiral to the president's "poor" pandemic management and his "unempathetic" response to the public outcry against police brutality following the death of a black man in police custody in May.

But Trump has given the highest priority to reopening the economy, while frequently downplaying the seriousness of the health crisis and blaming China for failing to stop the virus at its source, even as public health experts have warned that easing restrictions too soon could lead to an outbreak that veers out of control.

The concerns appear to have become a reality, with the country now reporting around 60,000 new infection cases and 1,000 deaths from the virus each day. Some southern and western states crucial to Trump's re-election, including Florida and Arizona, have been among those with particularly dramatic spikes in cases throughout June and July.

Finding himself in an awkward position, Trump has abruptly signaled a shift in tone on the coronavirus issue, explicitly encouraging the public to use face masks to slow the spread of the virus and resuming press conferences to update the public on his administration's pandemic response, which he had not done since late April.

The pandemic also forced Trump to cancel a full-scale Republican convention scheduled in Florida in August, during which he was supposed to deliver his nomination acceptance speech with great fanfare.

As events to reach out to voters go largely virtual for both campaigns, some experts said that Trump is losing his edge in this aspect given that he can no longer make effective use of his "strong suit" of "putting on a show."

"One important thing that simultaneously hurts the president and helps Joe Biden...is that this is going to be a race that is far less about performance, and by that, I mean sort of the physical onstage performance, not performance of doing the job, but just how good of a show can you put on," said John Hudak, an election expert at the Brookings Institution.

"And what's going to be elevated is an election where voters have to look at the candidates and think about the ideas, more than the show that's getting put on in front of them," he added. 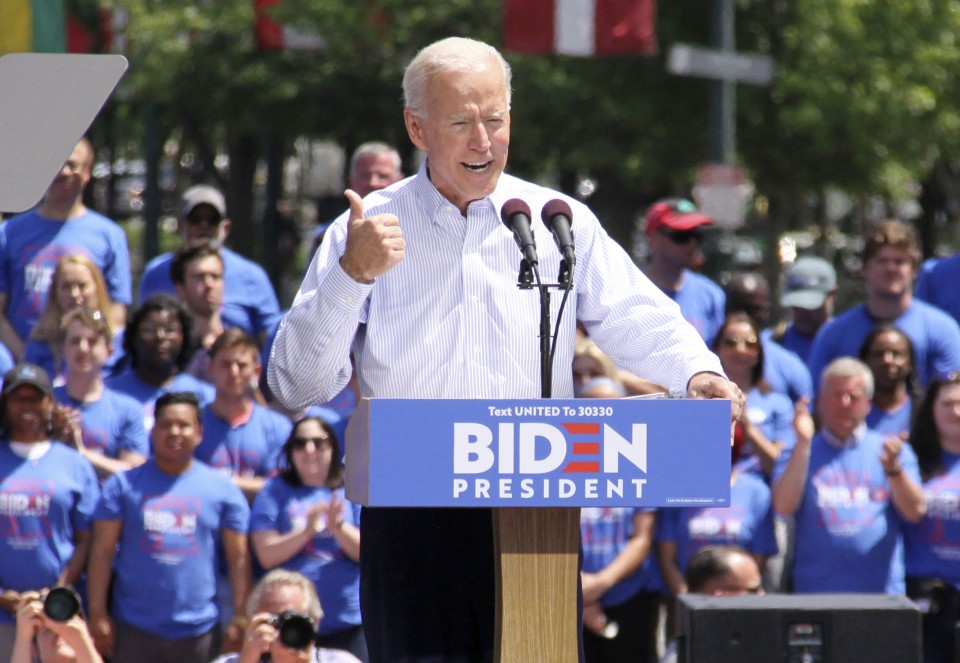 Former U.S. Vice President Joe Biden makes a speech during a presidential campaign rally in Philadelphia on May 18, 2019. (Kyodo)

Zogby, meanwhile, said that Trump seems to be starting to face a fundamental question over his unpredictable leadership style that has been part of the "charm for his base."

Since his inauguration in 2017 as an "anti-elite" figure, the former businessman and TV personality has excited his supporters by making them wonder "What's he going to do next?" and "How is he going to stick it in the eye to the power elite in this country?" Zogby said.

"But I think what we're finding, as he's losing support among older people, losing support among white voters, white Catholics...(is that) they're getting tired of the inconsistency," he said, adding that it will not be easy for Trump to win the perception that he could be a "stable consistent leader in a moment of crisis."

According to a Quinnipiac University national poll released in mid-July, Biden, 77, opened up his biggest lead of 15 percentage points this year over Trump, 74, in the race for the White House.

Most notably, voters gave Biden, who served as Barack Obama's vice president for eight years from 2009, a slight lead over Trump in a direct match-up on handling the economy, a reversal from the June poll.

Biden has recently rolled out his "Buy American" plan that features spending $700 billion on U.S.-made products and research over four years as an alternative to Trump's "America First" policies, which the former vice president criticizes as having mostly benefited the wealthy investor class, or "Trump's cronies and pals."

Trump, for his part, has sought to scare voters with claims that Biden would "destroy" the economy by rolling back tax cuts and imposing tough restrictions on carbon dioxide emissions in line with his pledge to rejoin the Paris climate accord, which Trump decided to exit. 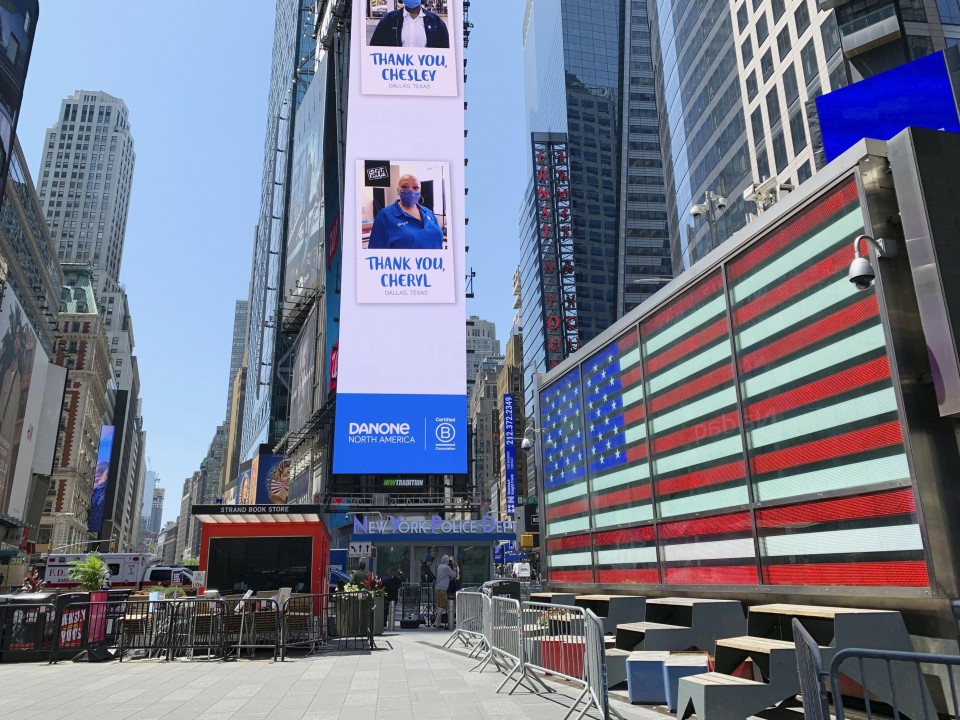 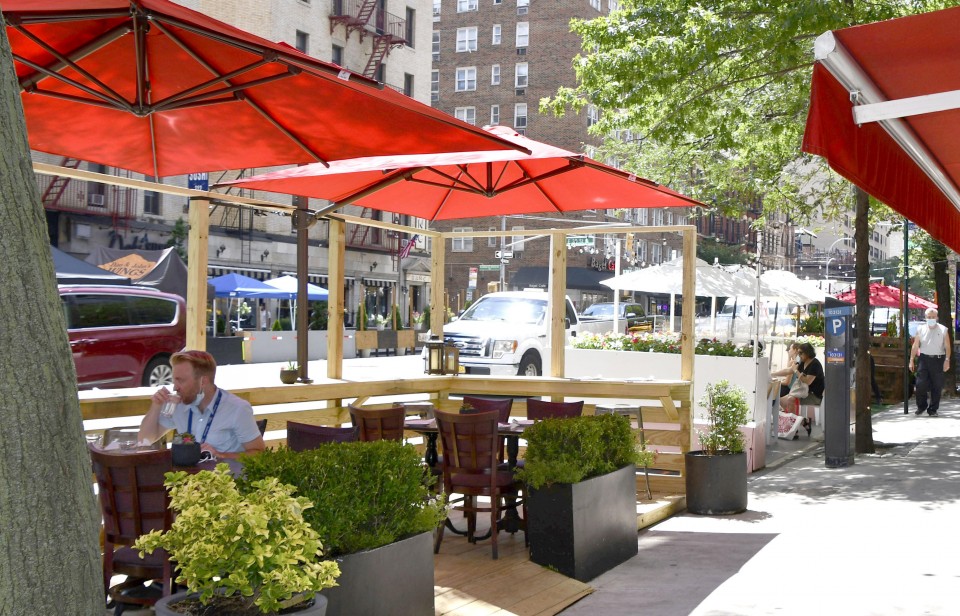 People sit in outdoor dining areas of restaurants in New York on July 14, 2020, as the city is in phase 3 of its reopening plan following restrictions imposed to arrest the coronavirus pandemic. (Kyodo)

In what appears to be another desperate move, Trump broached the idea last week of delaying the election based on his claims that widespread use of mail-in voting amid the pandemic would lead to "voter fraud." Changing the election date would require action from the legislative branch, but congressional leaders including from the president's own party have spoken out against any such delay.

Charles Crabtree, an assistant professor in the Department of Government at Dartmouth College in New Hampshire, said Trump's recent reset in coronavirus policies may be too late to revive his political fortunes.

"It's very, very hard -- I think no matter what his rhetoric is now -- for the American people to forget the fact that there are 150,000 deaths and over 4 million infected...as those numbers continue to rise, more and more Americans have firsthand experience of someone who's actually been infected by the disease."

"I think that Trump is months late and billions of dollars short," the social scientist said in an interview via video link.

While Trump does not seem to have much leverage to turn around his dismal re-election prospects for himself, Zogby warned that the current big lead by Biden should not be taken for granted as something sustainable, citing past examples.

Noting that Biden is expected to announce a vice presidential nominee soon, Zogby said, "It'll be a whole new race at that point and I wonder if those polls are going to seesaw again."