Michio Hakariya had been trying to share his experiences of the U.S. atomic bombing of Nagasaki with foreign audiences for some years when he began to feel that his inability to speak directly to them in their own language was blunting his message.

Despite his advanced years, the response of the retired high school science teacher, now 83, was to study English.

"That's how you get your emotions across," said Hakariya on why he now no longer uses an interpreter in his speech. "Since it's my own experience, I thought it's important to talk about it myself...even if I don't speak good English, it's always better that I directly communicate with the audience."

Having first started sharing his experiences more than a decade ago, he formed a group with like-minded hibakusha, or atomic bomb survivors, some three years ago within the Nagasaki Foundation for the Promotion of Peace, a local peace organization, feeling it was their "last chance" to work on getting their message across directly. 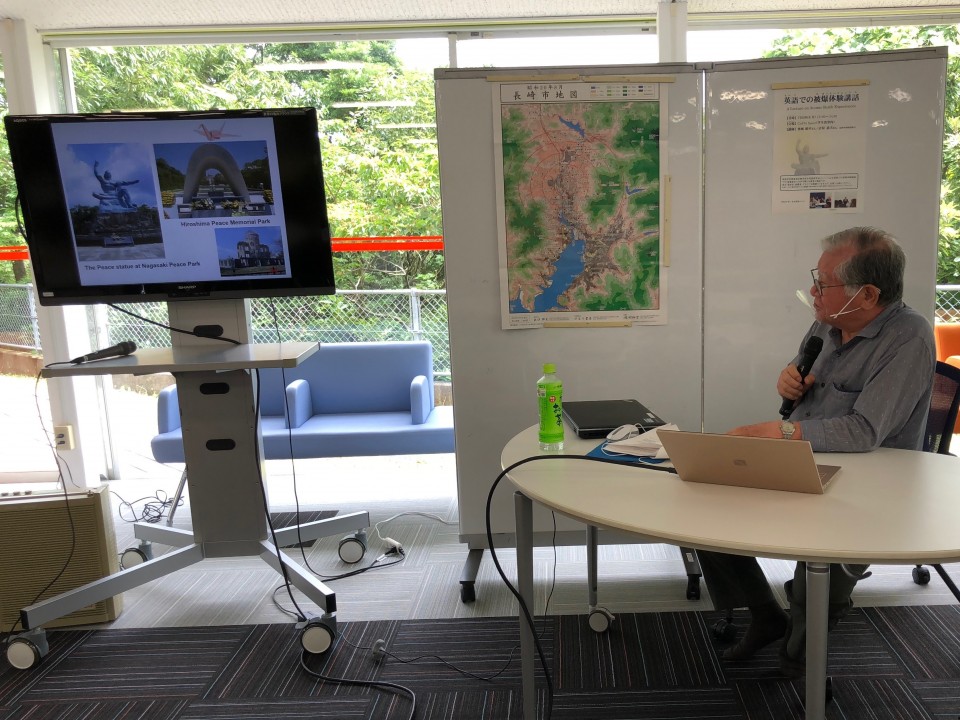 Michio Hakariya gives a lecture about his experience of surviving the 1945 U.S. atomic bombing on Nagasaki at a university in the southwestern Japanese city in July 2020. (Photo courtesy of Nagasaki Foundation for the Promotion of Peace)

Currently a five-member team, they make visits to local universities to give talks to foreign exchange students, and hope to broaden the audience base in the future.

The members have a script translated into English, but it is their job to practice it over and over to make sure they make themselves understandable to their audiences.

The number of survivors has been decreasing rapidly with their average age now standing at 83, according to the welfare ministry. There were 136,682 hibakusha as of March, but many of them do not want to talk about their terrible memories -- or are not in good enough health to do so.

"There is nothing fun about speaking up about my experiences to others. I do it because I consider it my mission. It's a struggle. There were times when I started crying during my talks," Hakariya said after attending a ceremony at the city's Peace Park on Sunday to mark the 75th anniversary of the bombing. 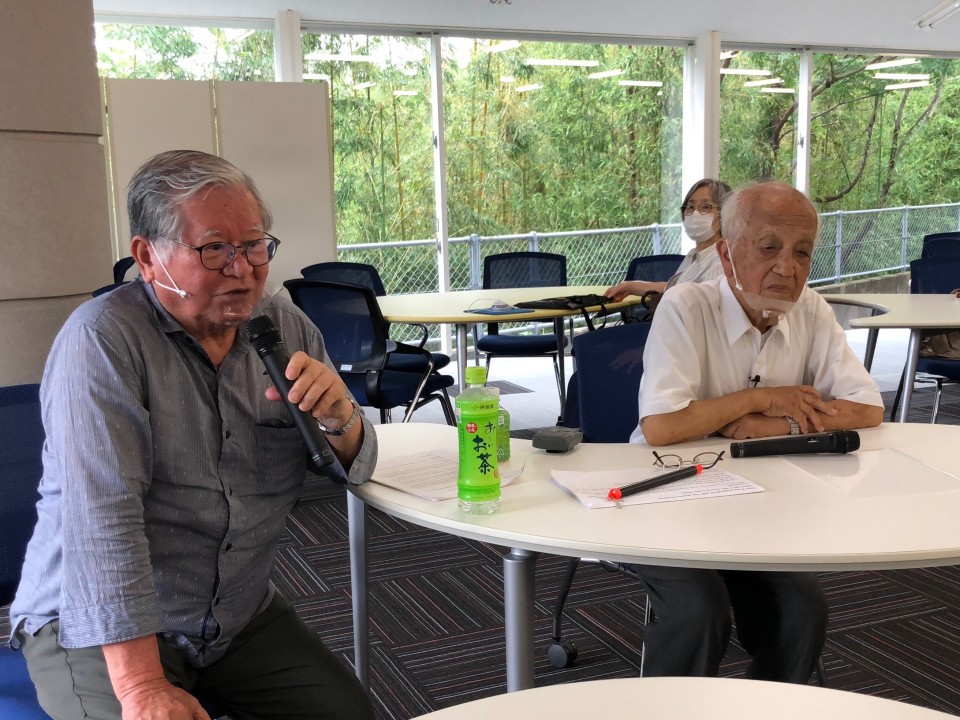 Michio Hakariya (L) and Shohei Tsuiki give a lecture about their experience of surviving the 1945 U.S. atomic bombing on Nagasaki at a university in the southwestern Japanese city in July 2020. (Photo courtesy of Nagasaki Foundation for the Promotion of Peace)

"I don't want to be too pessimistic, but if I give up, who would talk about it? That's why I need to keep doing this," he said. "In less than 10 years or so, people will not be able to learn about the bombing directly from survivors."

In his English script, he explains he experienced the atomic explosion at the age of 8 as "a bright flash of white light" and that "it was like looking into the headlights of a car."

On the day, Hakariya had had plans to go swimming and fishing with a friend, but his mother told him to finish his homework before going out -- probably saving his life. When the attack happened at 11:02 a.m., the bomb exploded near the river where he was supposed to have been.

"He didn't show up when school started up again, and I never saw him again. He must have been waiting for me at the river on that day," Hakariya says of his friend in the script. "I still feel guilty and regret that I couldn't keep our promise to meet. Losing a best friend was very shocking for me."

His talks provide a rich account of the city in the aftermath of the attack, three days after the world's first atomic bomb was dropped on Hiroshima, and include a description of how he got used to seeing the bodies of victims being cremated at a public square.

He also touches on his struggles during and after the war, which ended nine days after the Nagasaki bombing that killed an estimated 74,000 by the end of 1945.

Even before the group was established, he had made attempts to speak in English when giving talks overseas, but felt his grasp of the language was not good enough to make himself understood.

"That made me realize the importance of studying English harder. I also thought we (the survivors) need to learn to communicate with people from overseas," he said.

With effort, he has gained confidence. He still recalls the time when he saw an American student crying in one of his first English talks after forming the group.

Hakariya's most recent talk was with 93-year-old member Shohei Tsuiki in front of foreign students last month at a local university. But their future plans have become uncertain because of the novel coronavirus pandemic.

Still, Hakariya hopes to continue his English talks as long as he can amid concern that more and more people will no longer know about the war in Japan and overseas.

"The 75th anniversary forced me to think about how many more years I can do this," he said. "But I want to continue and I want people to think about the importance of peace and how miserable people who survived the atomic bombs were."