Calls for the government to shift parliamentary sessions online and allow for remote attendance have increased as Japan endures a protracted battle against the coronavirus, but implicit restraints within the Constitution have hindered progress so far.

Young lawmakers from the ruling Liberal Democratic Party and other political parties have advocated for Diet sessions to be held remotely since Japan declared a nationwide state of emergency in April, following the precedent set by countries like Britain, South Africa and Latvia. 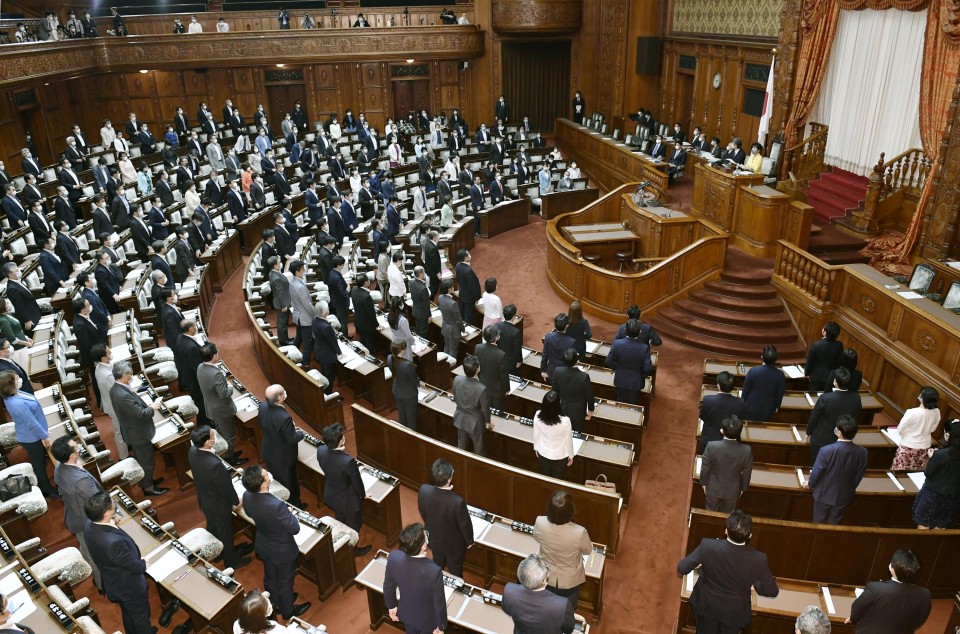 Hayato Suzuki, an LDP member in the House of Representatives, has suggested holding a "hybrid Diet" session, in which watching a live stream and participating online would be sufficient for a member to be considered in attendance.

"If the Diet doesn't change on its own, it runs the risk of no longer being able to function," warned Suzuki, who argues that current times differ greatly to when the Constitution took effect in 1947.

Britain upended 700 years of history in April when the coronavirus outbreak forced policymakers to hold their first "hybrid parliament" session, where 120 members of Parliament joined the debating chamber via Zoom video conferencing software.

According to a parliamentary statement, committees within the parliament of South Africa have also been meeting remotely since April, and the country on May 15 marked the 100th virtual meeting of its oversight committees.

Latvia, one of Europe's three Baltic states, went a step further and developed a specialized tool to enable its parliament to operate fully online. On May 26, the country used its tailor-made "e-Saeima" platform to successfully hold its first remote plenary sitting.

However, in Japan such proposals have hit a wall as Article 56 of the Constitution dictates that at least one-third of members from both houses must attend plenary sessions. Currently, all 465 members of the lower house and 245 members of the upper house are physically present when voting.

Moves to shift online have also been met with resistance from older lawmakers who are reluctant to embrace change. One asserted, "We need to be faithful to the Constitution. We shouldn't get caught up in the confusion but rather debate this during normal times."

But Motohisa Furukawa, head of the political reform unit of the opposition Democratic Party for the People, disagrees.

"We should interpret the regulation on attendance in the Constitution with flexibility," he said, following a meeting held by the unit in June, at which all members agreed that shifting Diet sessions online should be conditionally allowed due to the pandemic.

The wariness from older lawmakers may also stem from underlying concerns about adapting to new technology and online security.

In Britain, issues about security were raised regarding the remote voting system developed in-house, which lacked biometric identification. This meant family members of MPs could be the ones voting on legislation instead.

South Africa's parliament also reported that it had encountered challenges during its virtual meetings such as poor connectivity and disruptions. 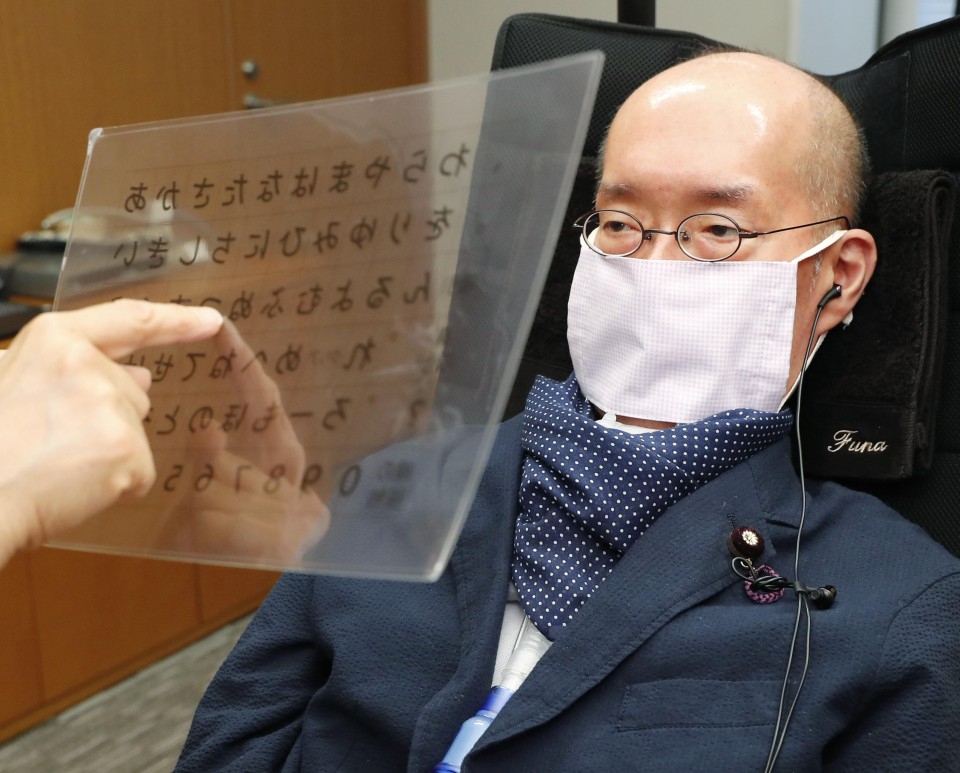 But the prospect of a virtual Diet is especially pertinent for lawmakers who suffer from severe disabilities, such as political party Reiwa Shinsengumi member Yasuhiko Funago, and are more significantly at risk of experiencing complications if they contract COVID-19.

Funago, 62, a sufferer of the progressive neurological disease known as ALS, refrained from attending Diet sessions for a brief period to lessen the chance of contracting the virus, but said upon returning in March that Japan "should take this opportunity to consider permitting remote participation via the internet."

Similarly for Mitsuru Urata, who suffers from muscular dystrophy and was elected to the Okegawa city assembly in Saitama Prefecture last November, contracting the coronavirus would be life-threatening due to his pre-existing condition.

Poor respiratory function prevents the 27-year-old from wearing a mask, which means he has to attend city council meetings without his face covered.

His need for an assistant while in the assembly hall also means he runs a higher risk of infection because it is more difficult for him to avoid close contact with other individuals. 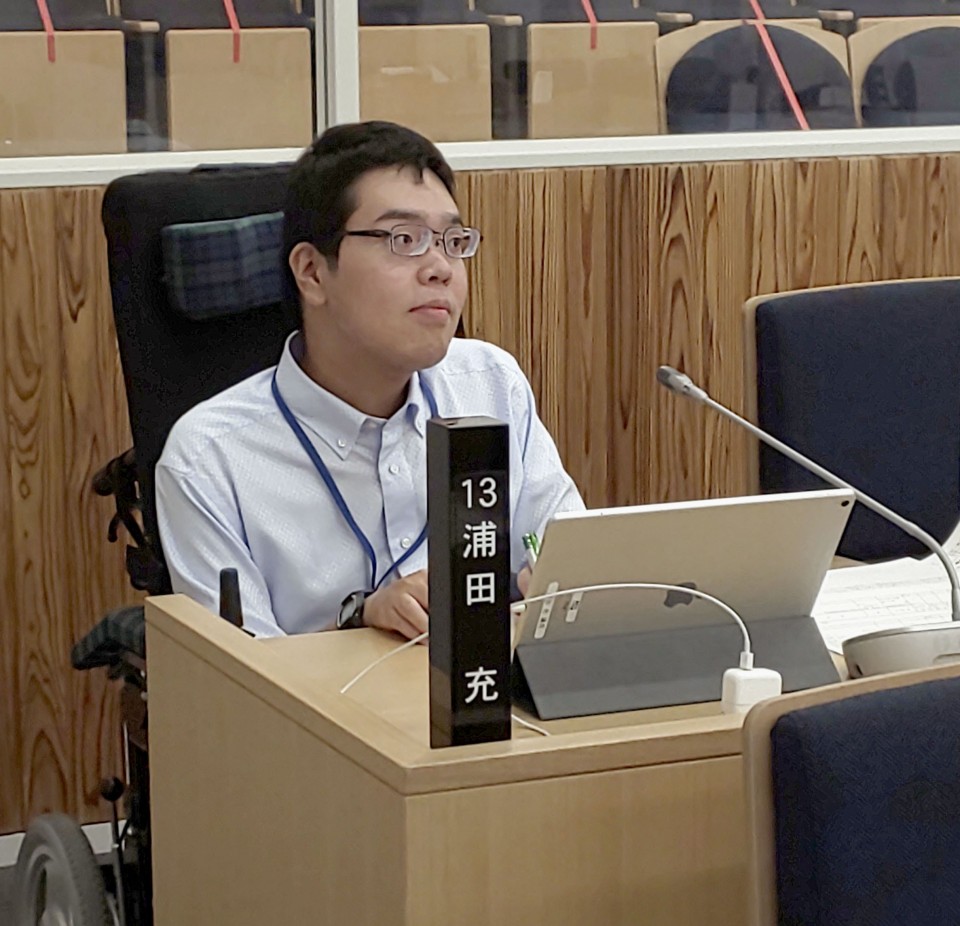 "I want to fulfill my responsibility, but I also have to protect my life," said a frustrated Urata, as he called for remote attendance to become accepted in Japan.

Local governments previously debated the issue in an effort to cater to assembly members raising children or caring for family members, but the outbreak of the coronavirus has accelerated developments.

In April, the Ministry of Internal Affairs and Communications told local governments they could hold pre-plenary deliberations online as long as they passed a related ordinance or amended meeting regulations.

The Osaka city assembly made quick work of such amendments in May to enable it to shift its meetings online, while the town council in Bandai, Fukushima Prefecture, in June trialed having some members participate remotely from a separate room using a videoconferencing system.

But according to the local government law, plenary sessions, in which decisions are made, require at least half of their members to be physically present. The internal affairs ministry also holds the position it will not recognize remote participation for such meetings.

In July, five members of the Toride city assembly in Ibaraki Prefecture, including chairwoman Hisayo Saito, delivered a written opinion to internal affairs minister Sanae Takaichi, proposing legal revisions be made to allow for plenary sessions to shift online.

According to the members, Takaichi recognized the need for the change but said it is "a medium-term issue due to the identification verification and security measures that must be considered." 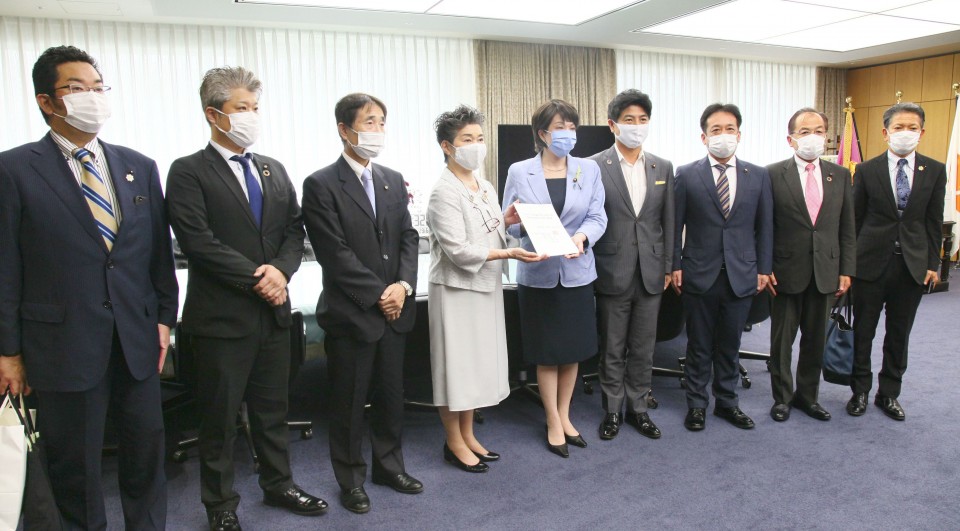 Supplied photo shows Hisayo Saito (4th from L), chairwoman of the Toride city council in Ibaraki Prefecture, submitting a letter to Sanae Takaichi (5th from L), minister of internal affairs and communications, in Tokyo on July 1, 2020, in an effort to enable local assemblies to hold plenary sessions online. (Kyodo)