As Japanese households look forward to eating autumnal dishes, worries are emerging that the Pacific saury may become prohibitively expensive as stocks decline due to climate change and overfishing by neighboring countries like China and Taiwan.

The fish, caught from July to December and sold widely around Japan from around 100 yen ($0.94) each, is a fall staple, as conveyed by its name "samma" -- a combination of kanji Chinese characters for fall, sword and fish. 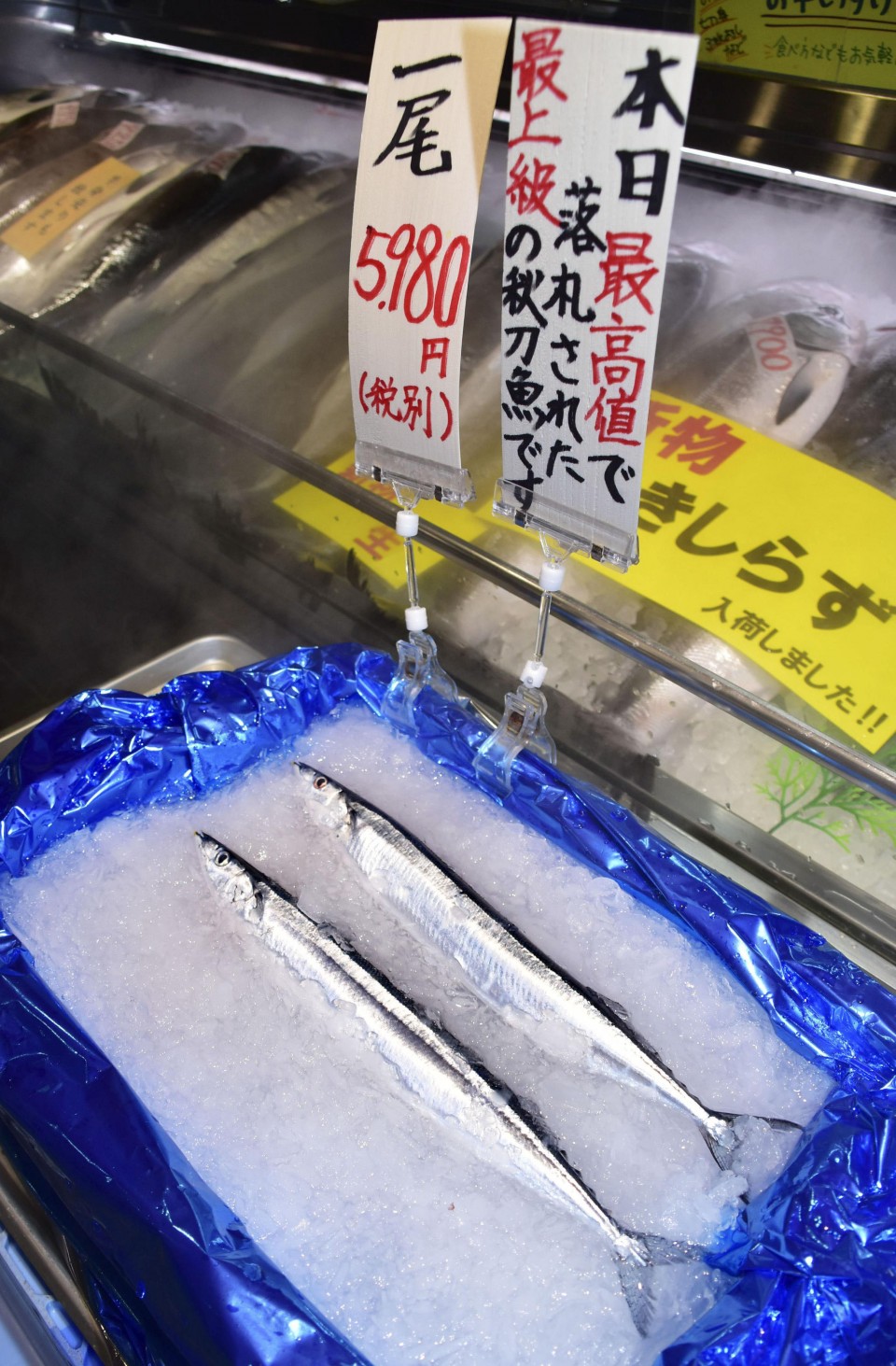 The stick-held dip net saury fishing season got under way early Wednesday, with 10 small vessels setting out toward Russian waters from the east coast of the northernmost main island of Hokkaido.

More than 99 percent of the fish taken by Japanese vessels in the seas surrounding Japan or in the Northern Pacific are caught using stick-held dip nets, while the remainder are caught in drift nets.

The stick-held dip net saury fishing season was scheduled to start Monday but had to be postponed to Wednesday due to bad weather. The drift net saury season has already begun.

Wholesale prices for Pacific saury broke the record on July 15 at the season's first auction held at a market in Kushiro in Hokkaido, fetching 41,040 yen per kilogram amid a record-low catch. It beat the previous all-time high of 35,640 yen set in 2018.

One saury, caught off Hokkaido, was sold at a retail price of 5,980 yen at the first auction.

Exorbitant prices for the season's first agricultural or fishery products are not unusual in Japan, as symbolism plays a role, with high prices considered to be representative of an auspicious start to the season.

They are still predictive of a trend of increasing prices for households, however.

According to preliminary data from the Ministry of Agriculture, Forestry and Fisheries, 45,800 tons of Pacific saury were hauled in 2019, the fewest on record and less than 8 percent of what was caught at the peak in 1958.

This year's catch may even be smaller and the size of the fish may be down as compared to last year, the Fisheries Agency predicted in its July 31 report, warning of a worsening situation.

A confluence of factors, including climate change shifting saury's migratory patterns, and increasing competition for the fish has helped deplete stocks.

Consumption of marine products including saury has been on the rise in more countries, mainly developing economies. In 2018, the world's per capita fish consumption was estimated at 20.5 kilograms, compared with 9.0 kg in 1961, according to the U.N. Food and Agriculture Organization.

Some in the fisheries industry worry that if the catch continues to decrease, saury prices may become unaffordable for Japanese consumers.

"We do not know yet how this season will turn out. We would like it to be a reversal from last year when the catch was terrible," said Kohei Oishi, managing director of a Tokyo-based saury fishing cooperative.

The commission agreed last year to set annual catch quotas for Pacific saury for the first time. The collective cap for the combined catch in 2020 was set at 556,250 tons, with a cap of 330,000 tons placed on saury catches on the high seas.

However, the commission's annual meeting originally scheduled for June in Sapporo has been postponed due to the novel coronavirus pandemic, triggering concerns over further efforts to manage fisheries resources. 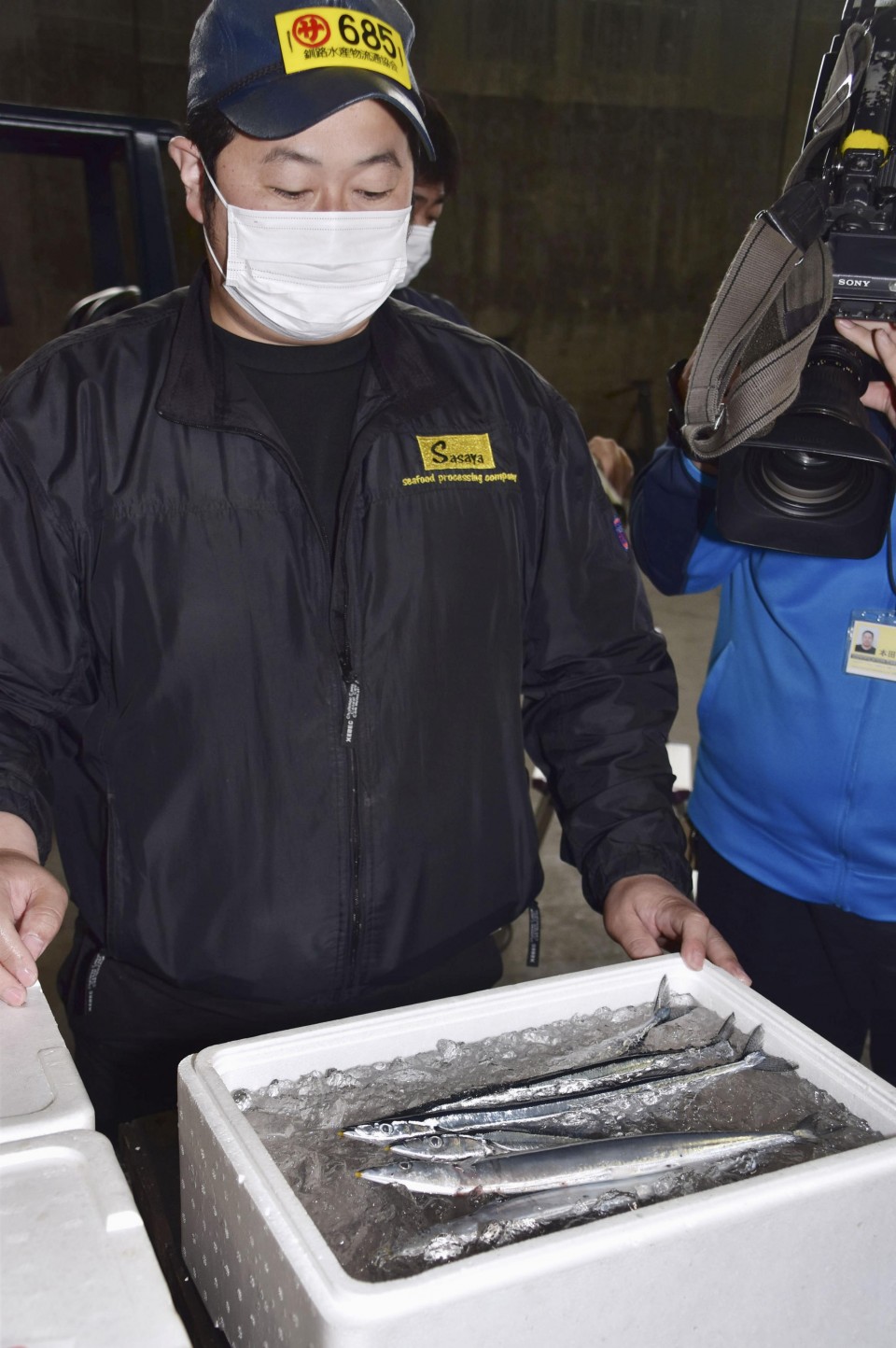 Tsuyoshi Sasaya looks at Pacific sauries at an auction in Kushiro, Hokkaido, on July 15, 2020. (Kyodo)