Tokyo's population has swollen over the years as young people from the regions have been drawn to the big city, but the tide may be turning as perceptions of work and urban life change in light of the coronavirus pandemic.

A 2019 report on internal migration by the Ministry of Internal Affairs and Communications showed that among people moving to Tokyo, those aged between 18 and 29 numbered around 250,000 -- accounting for more than half of the 470,000 total. 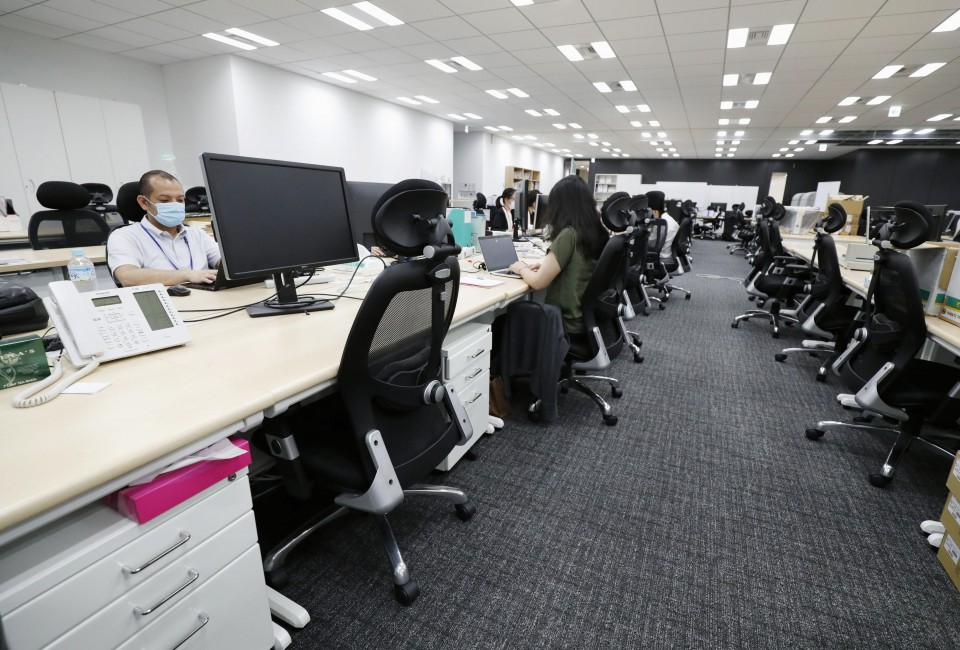 Only a few people are seen in the office of ClipLine Inc. in Tokyo due to teleworking on July 13, 2020. (Kyodo)

For young people not originally from the metropolitan area, the most popular reason for moving to the capital was to take up a place at university or other institutes of learning, at 37 percent. This was followed by the feeling that there are more opportunities in Tokyo and a liking for urban living.

A private survey, meanwhile, shows that around 90 percent of graduates in the metropolitan area go on to find jobs there.

When it comes to choosing where to live once they start work, however, a survey by job information firm Mynavi Corp. showed many Japanese people do not necessarily want to live in Tokyo -- if they have the choice.

Among 7,000 university students and others, 54.8 percent said they want to live in the regions, far more than the 15.1 percent who want to live in Tokyo, with many also voicing their desire to work at regional firms.

Lancers Inc., an IT company based in Tokyo's Shibuya Ward, introduced telework in late February as coronavirus infections began to spread in Japan.

Shoki Hosokawa, a 27-year-old employee of the company, said there "haven't been any problems" in doing sales promotions and meetings online while working from home when compared with the usual face-to-face approach.

The company is accelerating its drive to hire engineers living in the regions while classifying them as workers based at its Tokyo office. Its online company information session in June saw participants from Nagano and Osaka prefectures.

For Hosokawa, a return to his hometown in Sendai is now becoming a real possibility and is an idea he has toyed with since moving to Tokyo as it would mean being back among his close associates.

The spread of the coronavirus has seen more companies introduce teleworking. Of 1,111 firms responding to a survey by the Tokyo Chamber of Commerce and Industry carried out between late May and early June, around 70 percent said they have introduced teleworking, up 40 points from March, while big firms including Hitachi Ltd., and Nippon Telegraph and Telephone Corp. have said they plan to continue with it.

The coronavirus pandemic has called into question the need for employees to convene at one place for work and some companies are downscaling their offices.

Application developer ClipLine Inc. is one such company, terminating the contract for its 600 square-meter office in order to move to new premises half the size this autumn.

"One can work wherever, depending on one's life stage, be it raising children or caring for aged parents," said President Hayato Takahashi, 45.

Toru Hyakushima, a senior research fellow at the NLI Research Institute, looks at the latest moves positively while acknowledging that it also provides an opportunity to appreciate the importance of communicating face-to-face.

"Firms giving their employees flexible and diverse ways to work, not tied to place or time, is what the reform of working practices is all about," Hyakushima said. "It improves job satisfaction and comfort levels, and leads to increased productivity by raising motivation and creativity."

"But there's a limit to the use of cyberspace in bringing together ideas and creating new values," he said. "It is vital that you create real venues where you can feel other's reactions and mood, and engage in deep communications."