Tropical corals are increasing and seaweed beds nurturing sea creatures have disappeared in the sea south of Tokyo Bay, local divers and fishers have found, indicating that Japanese waters are not exempt from the effect of global warming.

In the waters off Kyonan in Chiba Prefecture, east of Tokyo, seaweed beds have disappeared over the past 12 years, while young table coral that usually grows in warmer waters in southwestern Japan have taken their place. 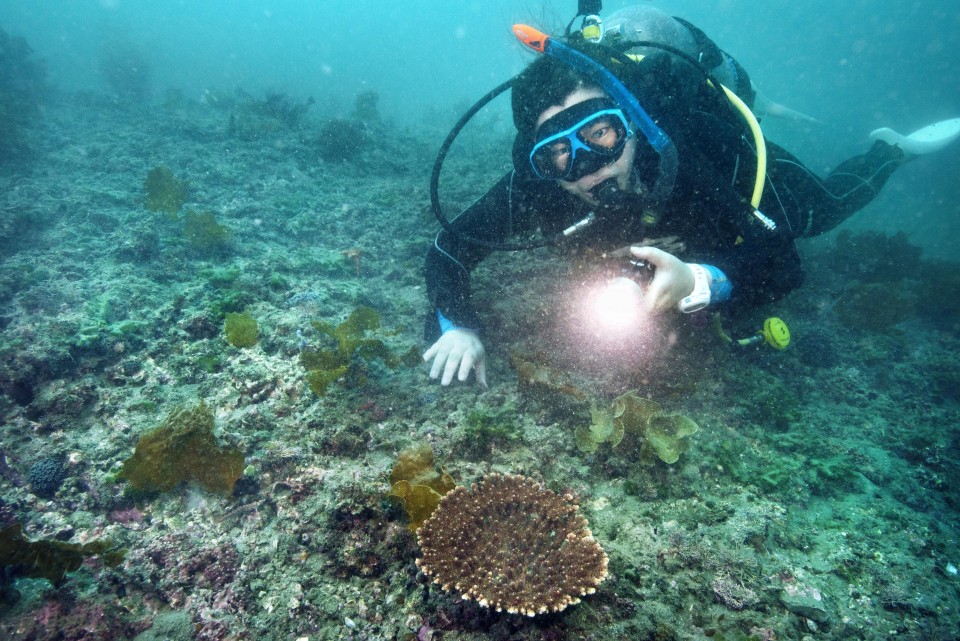 A diver shines a flashlight on a table coral in waters about 7 meters deep off Kyonan in Chiba Prefecture, eastern Japan, on June 18, 2020. (Kyodo)

"In recent years, (the seawater temperature) hasn't fallen below 15 C even in winter," said Jiro Uochi, a local guide and diver.

Uochi, 65, said he became aware of the disappearance of the seaweed beds in the summer of 2015. And similar scenes have been seen in other parts of Japan, as tropical coral larvae carried by warm currents take over as a result of the warmer seawater temperatures, which hit a record high globally in 2019, according to the Japanese Meteorological Agency.

In Kyonan, the seawater temperature has been pushed up in the past two years due to changes in the course of the Kuroshio Current, which begins off the Philippines and flows northeastward past Japan.

"With the loss of the seaweed beds, large abalone, which were our local specialty, died out," said Koichi Hirashima, head of a local fishers' association.

"It's also difficult to see seasonal fish," Hirashima, 71, said, adding it has become almost impossible to catch anchovies and cherry bass, both in season in February when the sea temperature should be lower.

One reason for the disappearance of the seaweed beds is believed to be that some seawaters are now warmer than 28 C. Another is the damage caused by fish such as rabbitfish, parrot fish, and sea urchins feeding on them, as they stay active during the fall and winter due to the warmer waters.

Uochi said he found tropical corals dotted about in Kyonan in the past two or three years.

"They grow fast and the numbers have increased," he said. "I'm wondering if they may become a large community like the ones in Okinawa or Kochi Prefecture."

The type of tropical table coral in Kyonan -- Acropora solitaryensis -- was first found in Mie prefecture, central Japan, in 1979, according to Naoki Kumagai, a coastal ecosystems and global warming expert at the National Institute for Environmental Studies, Japan. 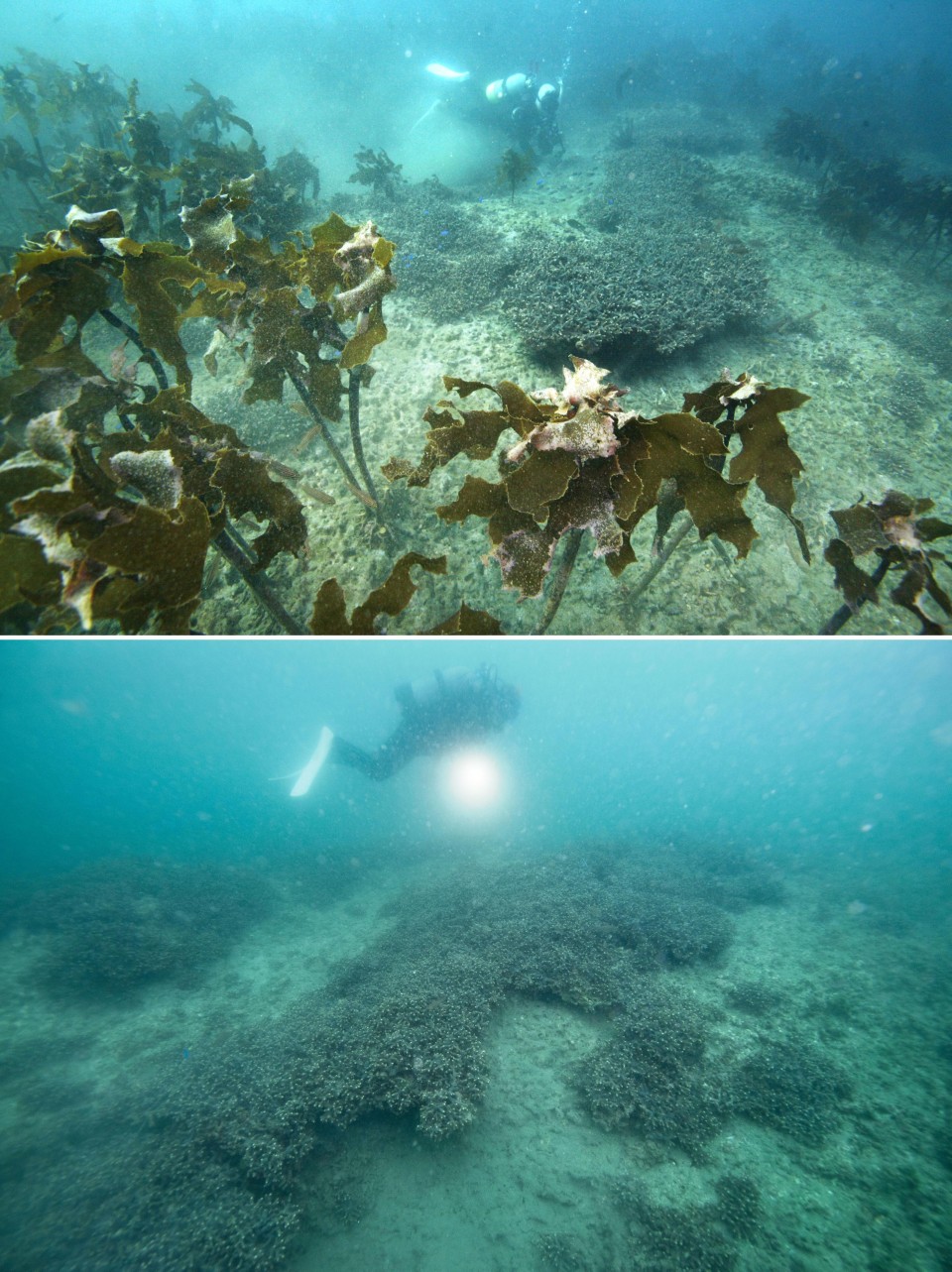 The coral was then confirmed off the Izu Peninsula in Shizuoka Prefecture in 1993 and Tateyama, Chiba Prefecture, in 2007, meaning that it has traveled about 350 kilometers northeastward from Mie in nearly 30 years, Kumagai said.

The researcher, however, said the seaweed was not able to expand its range of inhabitation as it reproduces by spores. "(The seaweed) failed to change its habitat to a suitable place for survival with a speed that matches climate change."

Kumagai said the biggest reason for seaweed beds being replaced by tropical corals are fish eating up the weakened seaweed.

"To protect the ecosystem, (humans) should catch fish that eat seaweed and put them on the table," he said, recommending that human beings adapt to the impact of climate change. 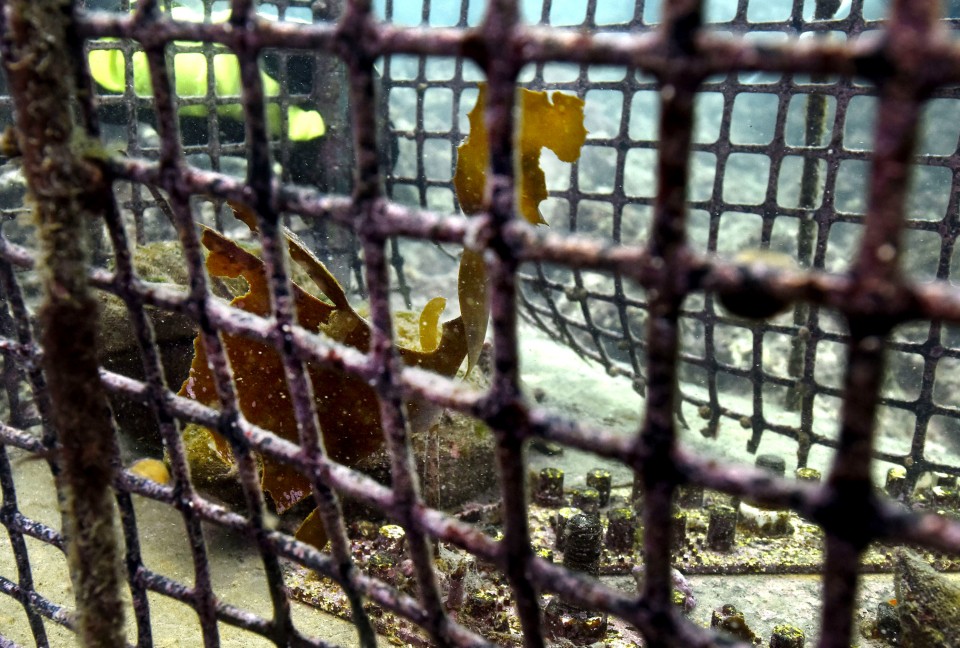 Photo taken on June 19, 2020, shows seaweed in a cage in waters about 3 meters deep off Kyonan in Chiba Prefecture to protect it from being eaten by fish. (Kyodo)