A group of Ainu, an ethnic minority in northern Japan, filed a lawsuit Monday against authorities to grant them exemption from ban on commercial fishing of salmon in rivers.

While Japanese law stipulates that the Ainu are an indigenous people, it does not guarantee their self-determination and other tribal rights, with the government citing there are no Ainu tribes. 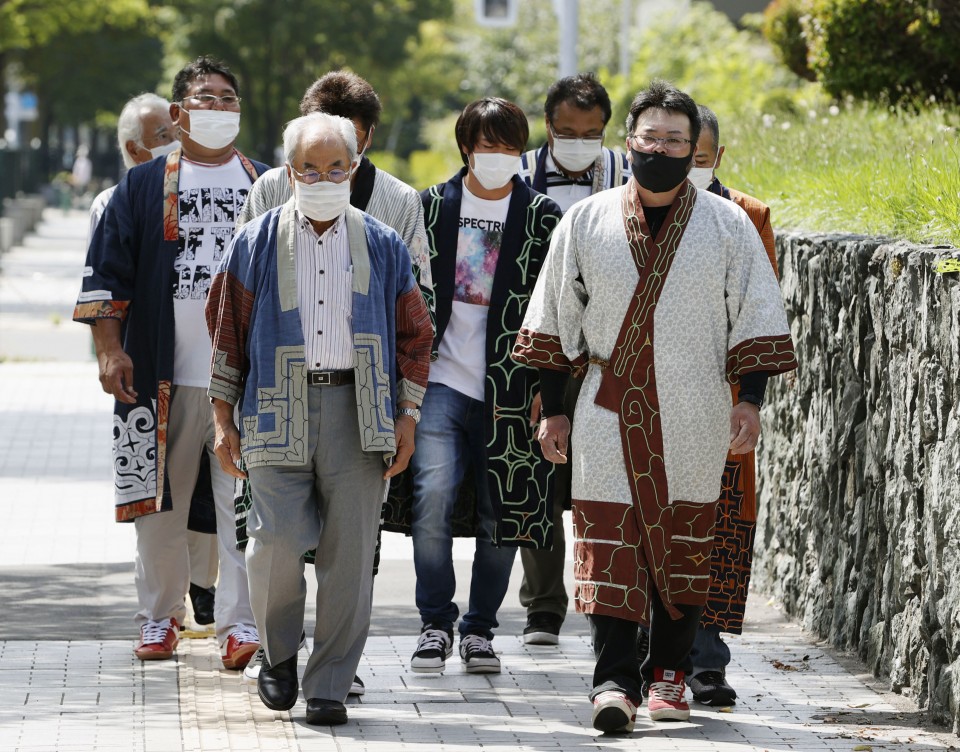 A group of Ainu, an ethnic minority in northern Japan, head to the Sapporo District Court on Aug. 17, 2020, to file a lawsuit against authorities to grant them exemption from ban on commercial fishing of salmon in rivers. (Kyodo)

The suit, filed with the Sapporo District Court against the central and Hokkaido governments, is the first such lawsuit by Ainu people to confirm their indigenous rights.

Salmon fishing in rivers is illegal under the law on the protection of fishery resources and Hokkaido's regulations on inland fishing. The Ainu living inland can only fish salmon for traditional fishing and must request permission from the governor.

According to the lawsuit, the plaintiffs are members of an Ainu cultural preservation body based in the town of Urahoro. The group includes descendants of Ainu communities who had lived around the Tokachi River in Hokkaido since the Edo Era that began in the 17th century.

In the lawsuit, the plaintiffs argue that they have retained from their ancestors the right to fish to sustain their livelihood, even though that right has been abolished by an assimilation policy pursued by the government during the Meiji period (1868-1912).

The government "ignored" and violated Ainu rights to fish and hunt as the Meiji government reclaimed land in Japan's northern islands, said the group.

The plaintiffs insist they retain the right to use natural resources as in the past unless the state can give a "legitimate reason" for putting the land, where their ancestors had fished, hunted, and logged, under state ownership.

The state has asserted that with the "disappearance" of Ainu villages due to the assimilation policy, there are no tribes with rights over land and salmon fishing.

The focal points of the suit are expected to center on issues such as the legality of the land dispossession by the Meiji government, and whether the recovery of fishing rights is applicable to the group filing the suit.

The Ainu had struggled to maintain their language and culture due to the assimilation policy, and were pressed to farm instead of hunting and fishing that are integral to their culture.

In 1997, a law was enacted in Japan to preserve Ainu culture. While it was the first such legislation acknowledging the existence of an ethnic minority in the country, it stopped short of saying the Ainu are indigenous.

Japan was among those who supported a U.N. declaration in 2007 that recognized the rights of indigenous people as a collective.

In May last year, Japan enforced a law saying for the first time that the Ainu are an indigenous people in Hokkaido. Some Ainu have said, however, that the legislation does not refer to the recovery of fishing rights.