Naomi Osaka said Wednesday night she will not play her scheduled semifinal at the Western and Southern Open, joining a wave of sports boycotts across the United States calling for social justice and an end to police violence.

"Before I am an athlete, I am a black woman," she said on Twitter, where she asked her fans to focus on issues that are more important than watching tennis and start engaging in difficult conversations.

"As a black woman I feel as though there are much more important matters at hand that need immediate attention, rather than watching me play tennis," Osaka wrote in English and Japanese.

Her decision comes in the wake of the weekend shooting of Jacob Blake by police in Kenosha, Wisconsin, and a number of other high-profile cases involving African Americans, including the killing of George Floyd by police in May.

The tournament's sanctioning bodies, the women's WTA tour and the men's ATP tour, subsequently announced that Thursday's play at the tournament has been suspended. 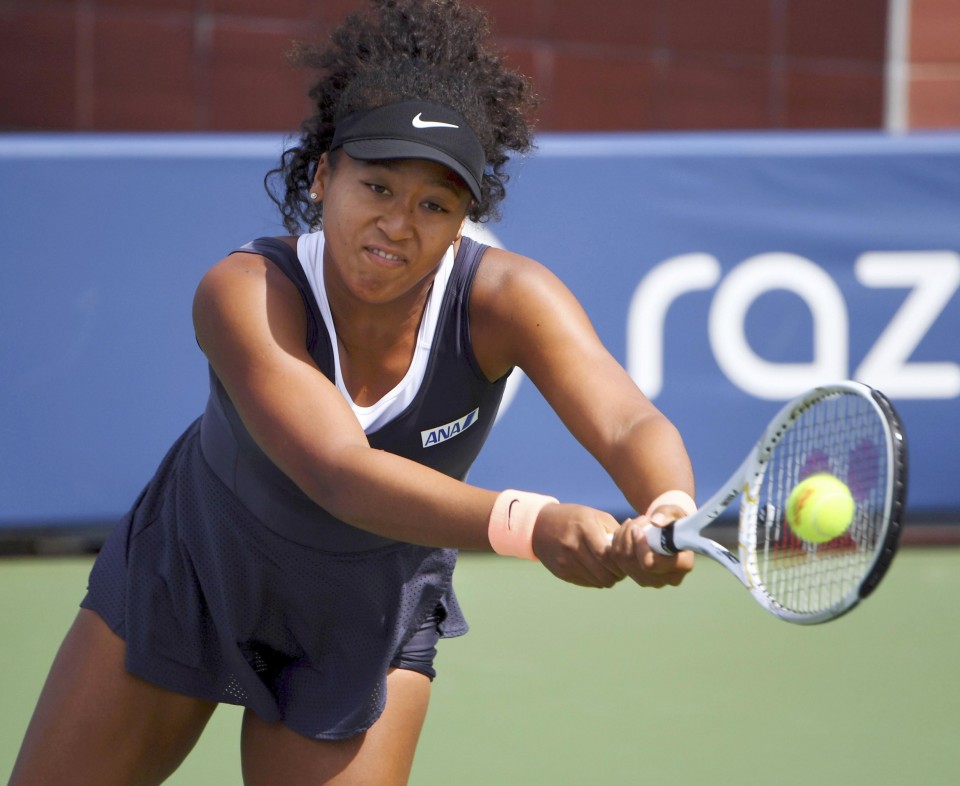 Naomi Osaka plays a shot during her victory over Anett Kontaveit in the quarterfinals of the Western and Southern Open in New York. (Kyodo)

Hours after her comeback 4-6, 6-2, 7-5 quarterfinal win over Estonia's Anett Kontaveit, Osaka, whose father is Haitian and mother is Japanese, announced her decision to join other professional athletes in taking a stand by refusing to play.

"I don't expect anything drastic to happen with me not playing, but if I can get a conversation started in a majority white sport, I consider that a step in the right direction."

A few hours later, the WTA, ATP Tour, and the United States Tennis Association issued a joint statement regarding the pause in tournament play.

"As a sport, tennis is collectively taking a stance against racial inequality and social injustice that once again has been thrust to the forefront in the United States," read the statement on the WTA's website.

"The USTA, ATP Tour, and WTA have decided to recognize this moment in time by pausing tournament play at the Western and Southern Open on Thursday, August 27. Play will resume on Friday, August 28."

Athletes in various U.S. sports took action on Wednesday after video emerged, showing Wisconsin police shooting Blake as he walked, unarmed, to his car over the weekend. The incident comes in the wake of the killing of Floyd and the subsequent worldwide protests it sparked.

The NBA's Milwaukee Bucks led the way, deciding against taking the court for their scheduled playoff game against the Orlando Magic in Florida. Two subsequent playoff games were also postponed.

Osaka said she is sickened and exhausted watching the continued "genocide" of black people at the hands of police, asking, "When will it ever be enough?" and adding hashtags of the names of Blake, Floyd and other black victims, Elijah McClain and Breonna Taylor.

Her management later confirmed she would not play her semifinal at the Western and Southern Open, which was forced to move to New York from its normal home in Cincinnati due to the coronavirus pandemic.

Earlier on Wednesday, the two-time Grand Slam champion fell behind by a set and a break in the match against Kontaveit but ripped off a nine-game streak that would eventually book her a place in her first semifinal at the U.S. Open warm-up tournament.

Osaka was scheduled to go up against Elise Mertens of Belgium on Thursday with the now-World No. 10, looking to reach her first WTA final of 2020.