Tensions between Japan and South Korea could flare up in the coming months amid an ongoing feud over an issue of compensation for Koreans made to work in factories during Japanese colonial rule.

Neither Japanese Prime Minister Shinzo Abe nor South Korean President Moon Jae In appears willing to back down, raising concerns about the prospects for ongoing security and economic cooperation between the close neighbors, both key U.S. allies in Asia.

A South Korean court on Tuesday began procedures to liquidate assets seized from Nippon Steel Corp., which had refused to comply with a Supreme Court decision awarding 100 million won ($8,400) each to four former workers.

Japan has condemned the ruling as a violation of international law, saying it runs counter to a 1965 bilateral agreement signed when the countries established diplomatic ties.

Under the agreement, Japan provided South Korea with $300 million in grants and $200 million in low-interest loans with the understanding that the issue of wartime compensation was being resolved "completely and finally."

The Supreme Court, however, ruled that the former workers were not properly compensated for emotional suffering endured under their conscription during the 1910-1945 period when the Korean Peninsula was under Japanese control.

Japan has threatened to retaliate if the branch of the Daegu District Court goes through with the liquidation of the Japanese steelmaker's stake in PNR, a joint venture with a South Korean partner Posco.

Possible measures include tightening conditions for issuing visas to South Korean citizens, imposing additional tariffs on South Korean products, and recalling Ambassador Koji Tomita from Seoul, according to sources close to the matter.

While declining to go into specifics, Chief Cabinet Secretary Yoshihide Suga said Tuesday that "all options" are on the table.

Conservative lawmakers from the ruling Liberal Democratic Party the same day submitted a resolution urging Abe to stand firm on the issue, saying Japan should be prepared to swiftly retaliate.

It is expected to take several months at least until the assets are actually liquidated. Nippon Steel has said it will file an immediate appeal, which would likely put the process on hold for several weeks, and after that the assets need to be evaluated before they can be sold off. 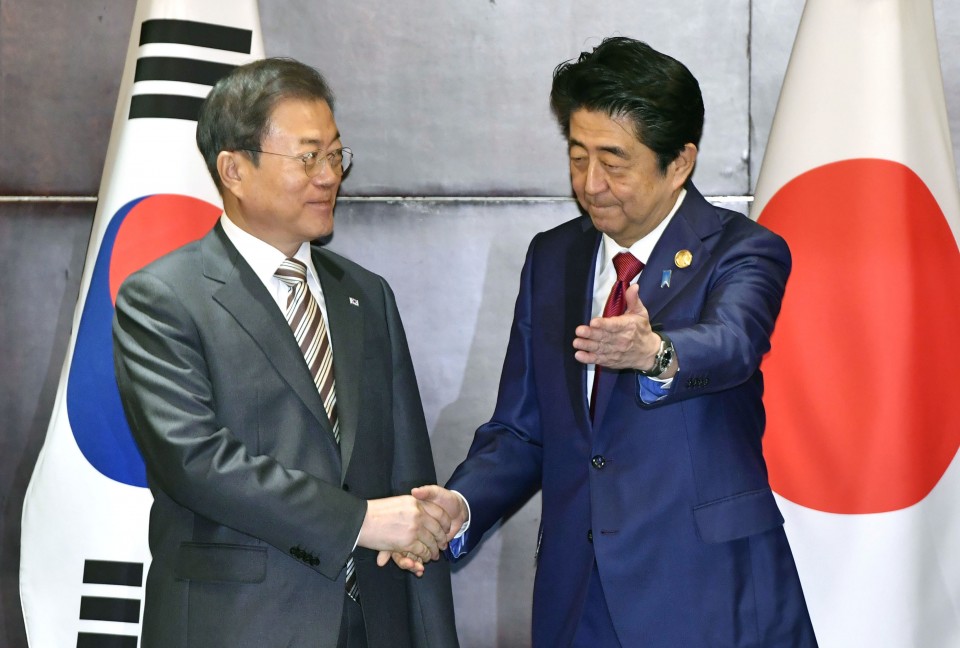 "We don't expect (South Korea) to make a major move soon," said a senior official at the Japanese Foreign Ministry. "That said, we are watching the situation closely."

The countries have been at loggerheads ever since the Supreme Court ruling in October 2018, with the feud taking another twist after Tokyo imposed stricter regulations on South Korea-bound exports of materials crucial to the production of semiconductors and display panels in July 2019.

That was followed by Japan's removal of South Korea from a "white list" of trusted trade partners that receive preferential treatment.

South Korea responded by threatening to terminate a bilateral military intelligence-sharing pact that helps the countries respond to missile threats from North Korea, a move it later rescinded under intense U.S. pressure.

But in June, it revived a claim filed with the World Trade Organization saying Tokyo's export controls were politically motivated, calling for the case to be heard by a dispute settlement panel.

Bilateral ties have further deteriorated in recent months over what South Korea sees as Japan's refusal to properly acknowledge the suffering of Korean workers at World Heritage sites including the Hashima Coal Mine in Nagasaki Prefecture.

The erection of statues that depict a man resembling Abe prostrating himself in front of a girl symbolizing "comfort women" has further strained the relationship.

The term comfort women is a euphemism for those forced to work in Japanese military brothels during World War II. While their exact numbers are unknown, estimates range from 20,000 to the hundreds of thousands, many from the Korean Peninsula.

Abe is unlikely to make any concessions to South Korea to improve relations. According to a poll published by the Cabinet Office in December, 71.5 percent of respondents in Japan said they have an unfavorable view of South Korea, a significant bump up from 58.0 percent the previous year.

A person at the premier's office said Abe, who has a conservative support base, is also "very conscious" of a backlash among Japanese netizens against what has been dubbed the "Apology Statue."

Daniel Roh, an expert on South Korea-Japan relations and CEO of Seoul-based consultancy firm Asia Risk Monitor, said he does not expect the wartime labor issue to be resolved while Abe and Moon remain in office.

"Moon has vowed to put the victims first so he cannot back down. As a politician, that is both his greatest strength and weakness."

Roh said former Prime Minister Lee Nak Yon, the leading candidate to become president when Moon's term ends in May 2022, would have more luck negotiating with whoever succeeds Abe, whose own time in office wraps up in September 2021.