Victoria, Australia's second most populous state, declared on Sunday a "state of disaster" and imposed the tightest public health restrictions the country has seen during the coronavirus pandemic, as a second wave continues to see hundreds of COVID-19 cases confirmed daily.

Premier Daniel Andrews announced as of 6 p.m. on Sunday, Melbourne will move to Stage 4 restrictions, which include a nighttime curfew between 8 p.m. and 5 a.m. and a reduction of public transport services for six weeks. 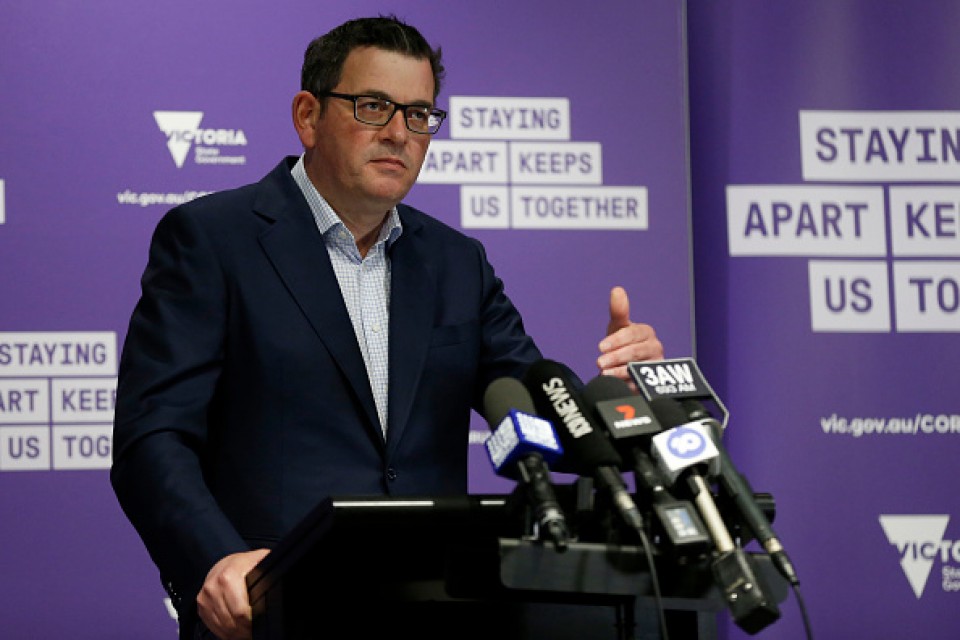 Victorian Premier Daniel Andrews speaks to the media during a press conference on August 02, 2020 in Melbourne, Australia. (Getty/Kyodo)

The new restrictions mean residents will not be able to travel further than 5 kilometers from their home, with some "common-sense exceptions."

Exercising outdoors will be limited to one hour per day, and shopping can only be performed by one person per household per day.

"We must do more. We must go harder. It's the only way we'll get to the other side of this," Andrews said.

Australia was successful in stemming transmission of the new virus early in the pandemic, but Melbourne has seen continually high levels of community transmission of unknown origin since June.

Stage 3 restrictions, including the compulsory use of masks in public, were introduced in July, but appear to have done little to stem the spread of the virus.

"Those mysteries, that community transmission, is in many respects our biggest challenge and the reason why we need to move to a different set of rules," the premier said.

Victoria now makes up the vast majority of new coronavirus cases in Australia, with 671 new diagnoses and seven deaths in the past 24 hours.

Since the outbreak there, neighboring New South Wales has been on high alert, with Premier Gladys Berejiklian "strongly" recommending the use of masks outdoors. The state, whose capital is Sydney, recorded 12 new cases on Sunday.

Australia has confirmed almost 18,000 COVID-19 cases and over 200 deaths nationwide.