More than 60 percent of volunteers registered for next summer's Tokyo Olympic and Paralympic Games are worried about how anti-coronavirus measures will be implemented and the format of the events, according to a recent survey by the games' organizers.

In a multiple-answer question to volunteers at the venues and athletes' village on what concerns them about their upcoming role, those who were worried about the anti-virus steps and how the games will be held accounted for the largest number at 66.8 percent.

The online survey was conducted between July 1 and 21 on about 80,000 volunteers, of which approximately 26,000 responded. 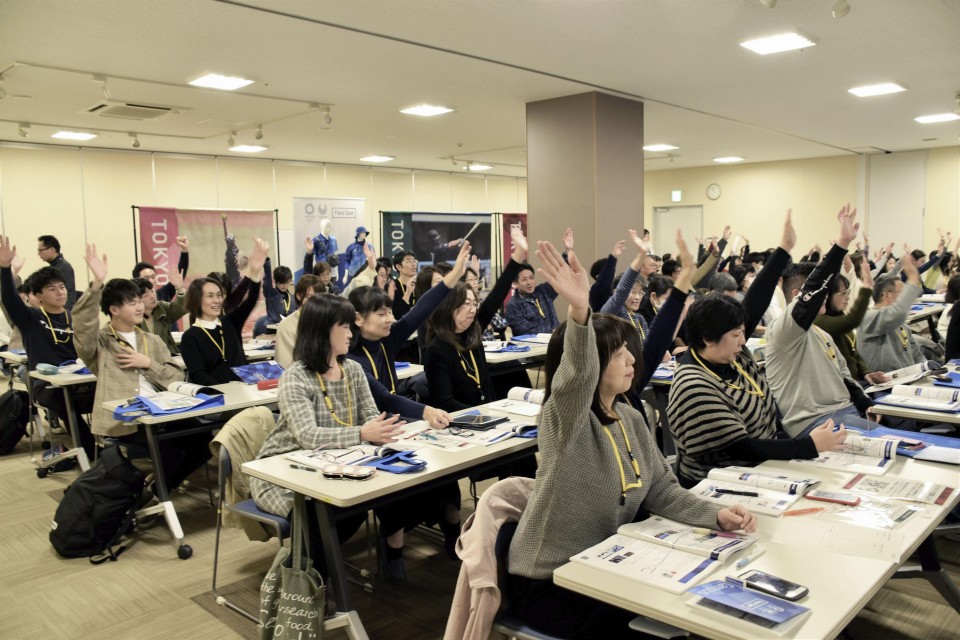 File photo taken in November 2019 shows volunteers for the Tokyo Olympics attending a training session in Fukushima, northeastern Japan. The Olympics was postponed for a year to 2021 due to the coronavirus pandemic. (Kyodo)

The organizing committee had said it has agreed with the International Olympic Committee to hold a "simplified" games partly to secure the safety of the athletes, and that the games would be held at the same competition venues and under the same schedule as planned before the postponement. Reducing the number of spectators remains a possibility, but has yet to be finalized.

Before the outbreak of the virus, the Tokyo Olympics were originally slated to be held between July 24 and Aug. 9 this year. They are now scheduled from July 23 to Aug. 8, 2021, to be followed by the Paralympics between Aug. 24 and Sept. 5.

The survey also found that 21.5 percent of respondents said they may no longer volunteer for the games due to the impact of the pandemic on their studies and job situation.

Asked in another multiple-answer question about what they are working on in the lead-up to volunteering at the games, 57.6 percent said physical fitness, while 57.2 percent cited learning English and other foreign languages.

In September or later, the organizing committee will meet with the central government and the Tokyo metropolitan government to study measures to prevent the spread of the coronavirus.

"We would like to continue our preparations (for the games) to assure volunteers they will be able to work in a safe environment," Tokyo 2020 Vice Director General Yusuke Sakaue said.

The organizing committee has also begun reconfirming with registered volunteers whether or not they want to continue their initial commitments, a process that will continue through Aug. 20.

Over 200,000 people applied to be volunteers, surpassing the organizers' target of about 80,000. Training begun last October but was suspended due to the pandemic.

Currently, there are no plans to recruit new volunteers.