Alcohol sanitizers and clinical thermometers have become two of the most critical must-have items for those working in the food-service industry in Japan as they struggle to recover from the impact of coronavirus.

Many restaurants and bars are asking customers to sanitize their hands when entering and using thermometers that give instant readings of body temperatures, both to prevent clusters of infections occurring and assure customers of safety.

However, customers are again decreasing this month as the country sees a resurgence in numbers of coronavirus-infected patients. 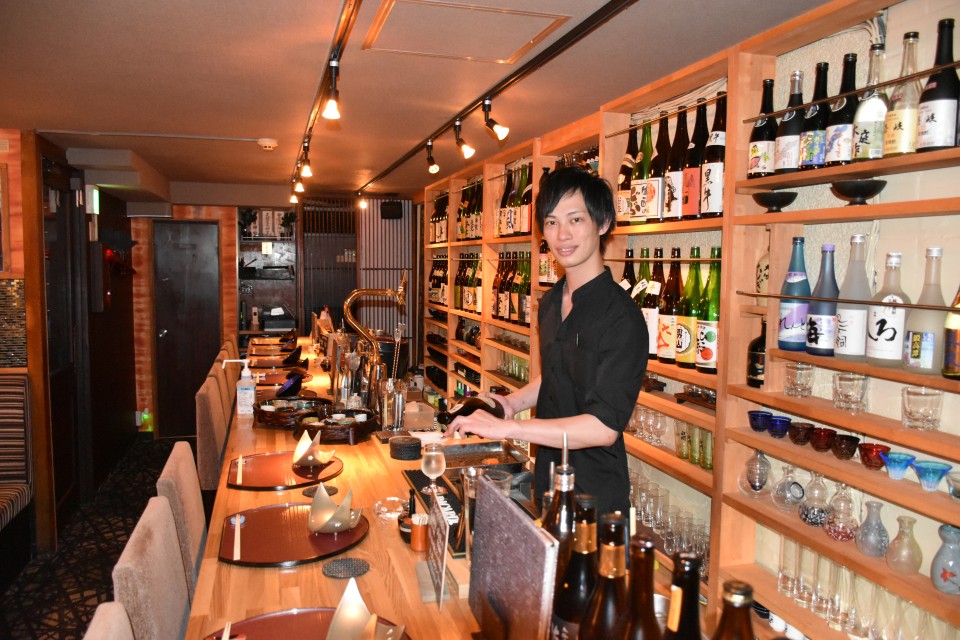 The call by the Tokyo metropolitan government for restaurants and bars to increase ventilation to lower the risk of airborne transmission has put Japanese Sake Bar Tonari in the capital's central Mita district in a difficult situation, since the bar is underground.

It has started to run its ventilation continuously and now keeps its door open throughout operating hours, although summer's hot, humid air invades the dark bar.

"We check customers' body temperature with non-contact type thermometers. We also ask them to sanitize with alcohol while keeping the door open and our staff wear face masks during working hours," said Yuna Kitagawa, 22, the manager of the sake bar.

He has started to ask customers for contact details as well as keeping a record of what times they come in order to "reach them just in case something happens."

After Prime Minister Shinzo Abe declared a nationwide state of emergency requesting citizens to stay at home in April, Tonari's sales dropped 60 to 70 percent. The emergency was lifted in late May.

While some public-facing industries such as gyms were asked to close by some prefectural governors, including Tokyo's, during the declaration, restaurants and bars were allowed to stay open -- but requested to shorten opening hours.

While many ended up shutting altogether during the state of emergency, Tonari kept going. It has put up a rainbow mark issued by Tokyo for restaurants complying with the city's nonbinding guidelines for safety steps.

Kitagawa was anxious about the possibility that an infection might occur at his bar, but believed that as long as precautions were followed, he was providing a needed service.

"We didn't shut like others because we wanted to provide a place for people to relax and unwind. I thought people would be stressed out during the stay-at-home requests," Kitagawa said.

He has already progressively decreased the number of seats at the counter to secure distance between customers and plans to do so again.

To make up for lost earnings, Tonari started to open for lunch during the state of emergency, also offering takeaways. Another new step was obtaining a license to sell alcohol to customers who wanted to take sake home and to operate a bottle-keep system.

Tonari opened in June 2019 and was a success until the coronavirus outbreak. Although its sales partially recovered in July, Kitagawa says he still cannot be optimistic.

The food-service industry in Japan is on its knees, with 398 bankruptcies in the sector between January and June, the biggest ever number for a half year on an annualized basis, according to credit research firm Teikoku Databank.

Modern Mexican Cabos, a restaurant also in the Mita district, closed its doors from April 3, a couple of days before the state of emergency was declared, until early May. 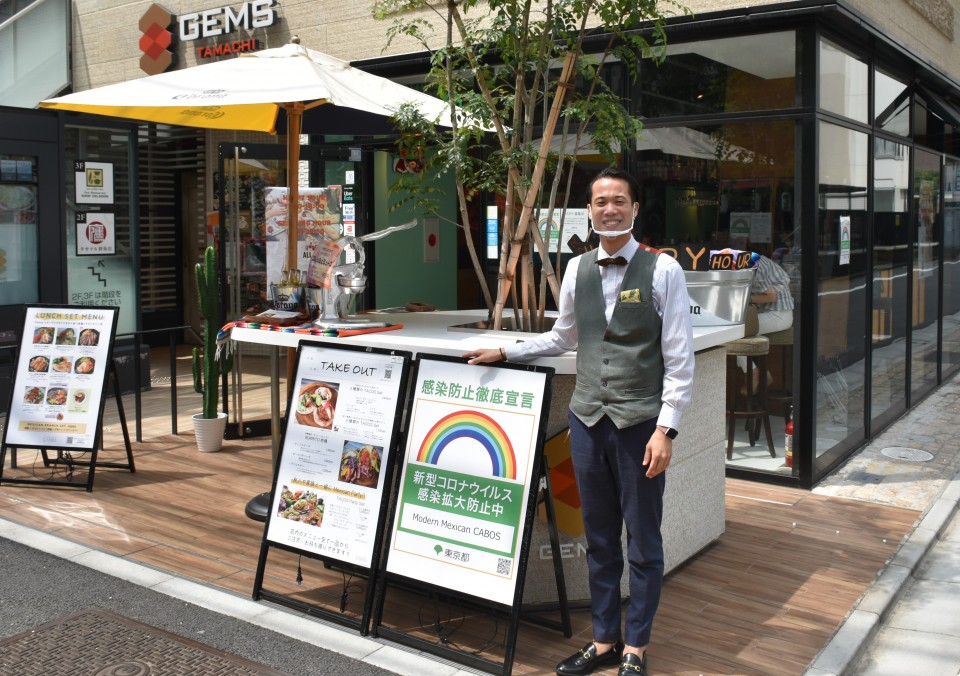 Photo shows Yuto Nagae with a see-through face mask in front of his restaurant in Tokyo on Aug. 10, 2020. (Kyodo)

"We thought our priority was to close for our customers' safety," said Yuto Nagae, 29, the general manager.

For menu items that were once served on one plate to be shared by customers, the restaurant now generally offers individual servings on small plates. At one point it also halted its self-service drink station.

Modern Mexican Cabos has also put up the rainbow mark issued by the Tokyo metropolitan government, which restaurants can download.

"We want to show the customers that safety is a huge concern for us. I think it is important to customers and important for us to show that," Nagae said.

Nagae put the sign a day after Tokyo Gov. Yuriko Koike held a press conference last month urging Tokyoites to enter only restaurants and bars with the sign. He said he hopes the system is embraced by society.

Modern Mexican Cabos took the step early as it feels transparency is a key to survival.

"We will be able to protect ourselves by providing information about what we've done in case something happens," Nagae said.

Nagae also asks staff to spray alcohol on seats and tables after customers leave. He says he originally got the idea from Tokyo Disneyland and Tokyo DisneySea, where theme park workers spray alcohol whenever visitors leave a ride.

Akihiro Sato, an infectious diseases expert, says he believes most restaurants have implemented basic measures, including checking staff's body temperatures before and after work. 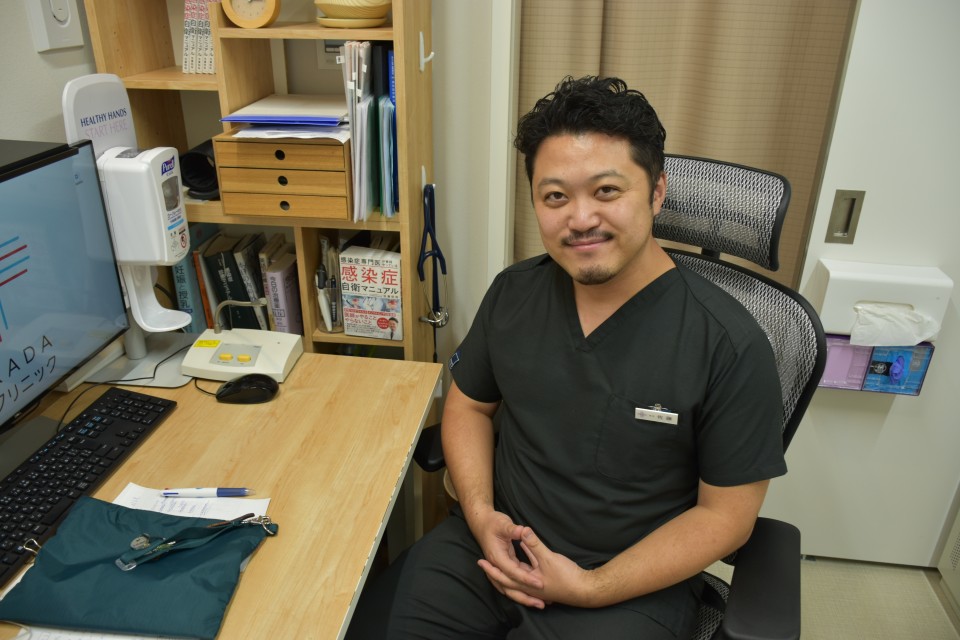 The head of Karada Internal Medicine Clinic in Tokyo, who has been offering consulting services for governmental organizations and companies, including in the food-service industry, since late May, also says the guidelines issued by the central and local governments to prevent the spread of the virus are effective.

But he says that what is missing is a way of checking up on whether individual restaurants and bars are really implementing such measures, which are voluntary.

The Tokyo government's rainbow mark, for instance, can be downloaded, printed out and put up by any restaurant or bar without accompanying checks or inspections.

"Ideally, local government officials should check every restaurant, but that is not realistic. It would be better therefore if there was a 'review' website on how well restaurants are doing to prevent infections," he said, suggesting customers themselves police enforcement.

Sato, who began helping hospitals with measures to control viral outbreaks even before the coronavirus pandemic started, emphasized that ventilation is one of the most important steps that can be taken by restaurants and bars.

"After face masks are taken off when eating and drinking, voices tend to get loud where tiny particles, or aerosols, can be emitted into the air," he said.

"Restaurants and bars should open the windows all the time when they can. If not, change the air for five to ten minutes every hour," he said.

He created a manual for the Tokyo metropolitan government to prevent the spread of infectious diseases in 2018 and recently released a book on how individuals can avoid catching coronavirus, whose title translates as "Infectious disease self-defense manual."

Other suggestions include getting customers to use alcohol sanitation not just when they enter but also when they leave restaurants and bars. "This will prevent customers from carrying the virus outside," he said.

Securing space between customers is also essential, he said. "For example, making two people sit diagonally at a four-seat table is one method."

Modern Mexican Cabos experienced a severe sales drop of around 40 percent during its closure but survived due to takeaway and delivery services.

"I think 'takeaway' and 'delivery' will become keywords for survival in our industry" as they now contribute a third of total sales for his restaurant, Nagae said.

When the restaurant was closed for around a month, it started to sell Mexican ingredients, including cactus, outside on the street, with Nagae determined to continue with the task he has set himself of popularizing authentic Mexican culture and food in Japan.

"We see a lot of restaurants saying they are Mexican in Japan, but they are actually Tex-Mex cuisine, a mixture of food from America's Texas and Mexican food," he said. "There are not many authentic Mexican restaurants in Japan."

To further drum up interest in Mexican food culture while surviving as a restaurant at the same time, it has started to sell the ingredients online this month.

Nagae is preparing to open up a new restaurant, Cielito Lindo Bar and Grill, next month in the redevelopment area incorporated in a building in Tokyo's Takeshiba area. He is planning to make the restaurant completely cashless.

"With the concept of the real estate's 'smart building,' as well as considering the coronavirus spread, making completely cashless will lessen the amount of human interaction that can prevent infection risks," Nagae said.