President Donald Trump will keep pressing U.S. allies to pay their "fair share" of defense costs and will work to end U.S. reliance on China as part of his pledges for the November election, his campaign said Sunday.

The list of what his campaign called "core priorities for the second term" was unveiled on the eve of a four-day national convention that will officially re-nominate Trump as the Republican Party's presidential candidate. Trump, 74, will face Democratic candidate Joe Biden, 77, in the Nov. 3 election.

The president will expand on the plans during his nomination acceptance speech Thursday, the campaign said. 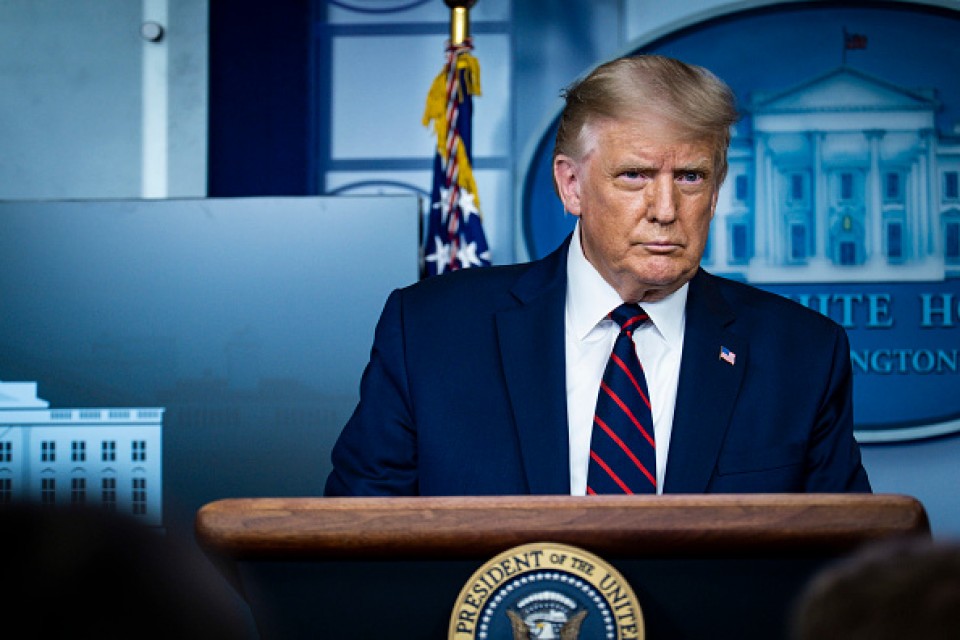 President Donald Trump announces that the Food and Drug Administration is issuing an emergency authorization for blood plasma as a coronavirus treatment during a press conference in James S. Brady Briefing Room at the White House on on August 23, 2020 in Washington, DC.(PHOTO NOT FOR SALE)(Getty/Kyodo)

On foreign policy issues, Trump will "get allies to pay their fair share," stop "endless wars" and bring U.S. troops back home, while maintaining and expanding U.S. military strength under his "America First" mantra, according to his campaign.

Biden, a former vice president and longtime senator with extensive foreign policy experience, has suggested that he values traditional U.S. alliances, apparently to draw a contrast with Trump, who has pressured countries such as Japan and South Korea to fork out significantly more money in exchange for U.S. security protection.

Trump's second-term priorities also suggest that he will maintain his tough stance on Beijing, which he sees as a country that has been "stealing" jobs from the United States.

The U.S. leader will bring back 1 million manufacturing jobs from China, offering tax credits for companies that repatriate operations from the Asian country, while prohibiting federal contracts from going to companies that outsource to China.

Trump will also hold Beijing "fully accountable for allowing" the novel coronavirus, which was initially detected in the central Chinese city of Wuhan late last year, to spread around the world, the campaign said.

The Trump administration has taken an increasingly hawkish stance against Beijing after the president's re-election prospects, based on a strong economy, were thrown into jeopardy due to the pandemic.

The United States has the highest number of fatalities from COVID-19, the disease caused by the coronavirus, in the world and has seen its economy battered.

Trump plans to create 10 million new jobs in 10 months in the United States if he wins a second four-year term, carry out tax cuts to boost take-home pay and enact what he calls fair trade deals, his campaign said.

While Trump has faced criticism for his poor handling of the pandemic, he promised that a vaccine would be developed by the end of this year and that the country would "return to normal in 2021."

OPINION: The most important election in our lifetime