As the summer vacation season arrives, many of Japan's hotels are betting that an emphasis on safety measures rather than low prices will be the best way to attract wary customers amid the novel coronavirus pandemic.

As they seek to make up for lost sales and stay afloat, some are also offering paid-in-advance vouchers and flexible reservations with no cancelation fees.

The unit, which runs over 200 accommodation facilities in Japan, has also designed its own authorization program that will certify that a member hotel has cleared more than 40 sanitation benchmarks, such as regular sterilization of elevator buttons, periodic ventilations of rooms, and promotion of contactless room service and checkout processes. 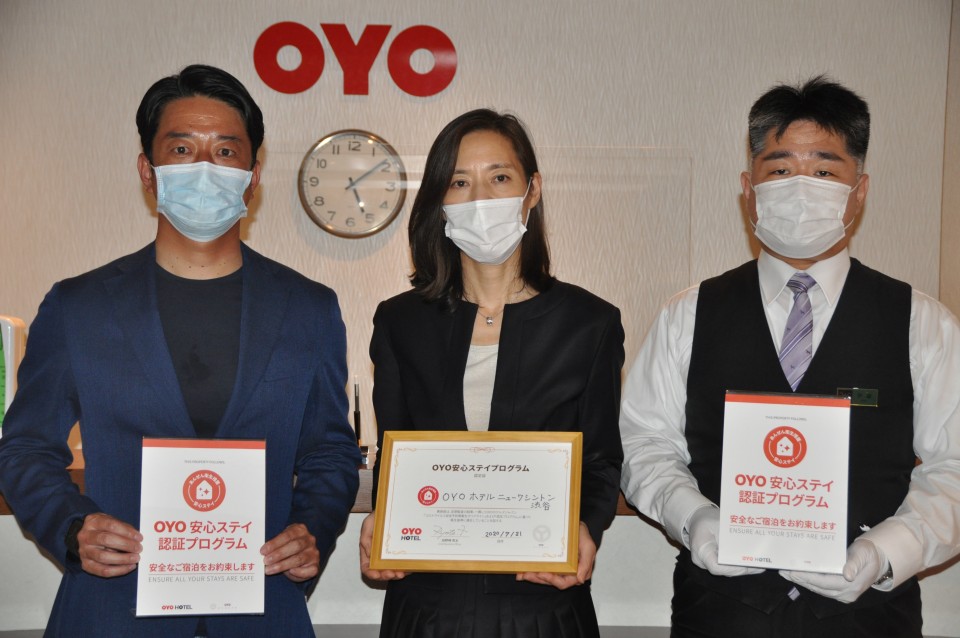 As of Aug. 5, some 107 member accommodation facilities had applied for certification, with 80 so far earning a logo.

"Some smaller hotels and inns are still in limbo about what they should do about coronavirus response measures due to a lack of resources and experience," said Oyo Japan Deputy-CEO Ryota Tanozaki.

"We wanted to support their first step forward by offering the sanitation package for free and also compiling our own authorization system. For small, family-run hotels, making a single pamphlet or brochure explaining their sanitary measures to customers is a burdensome investment," he added.

Hit hard by the pandemic, Oyo Japan's room occupancy rates decreased to 59 percent of year-before levels in January, 62 percent in February and 51 percent in March.

The falls, nevertheless, were not as bad as the nationwide average, due in part to Oyo Japan's artificial intelligence-powered dynamic pricing, which fluctuates depending on demand, supply and other factors.

Oyo Hotel New Washington in Tokyo, which made the decision to become a franchisee of Oyo Hotels after a sales slump, is one the member facilities that requested the free sanitation package and earned the sanitation certification.

The hotel is located opposite the headquarters of Japan's public broadcaster NHK and has "heavily depended" on NHK customers, hotel owner Yoshimi Takahara said.

"Oyo has been helpful just as we were aware of the need to strengthen sanitation measures for safe and comfortable stays," Takahara said.

Trip.com Group Ltd., a major Chinese provider of travel services including accommodation reservations, has also been enthusiastic about revitalizing the Japanese tourism industry in the hope that inbound travelers from China will return sometime in the future. Japan currently bans tourist arrivals from almost all countries due to the pandemic. 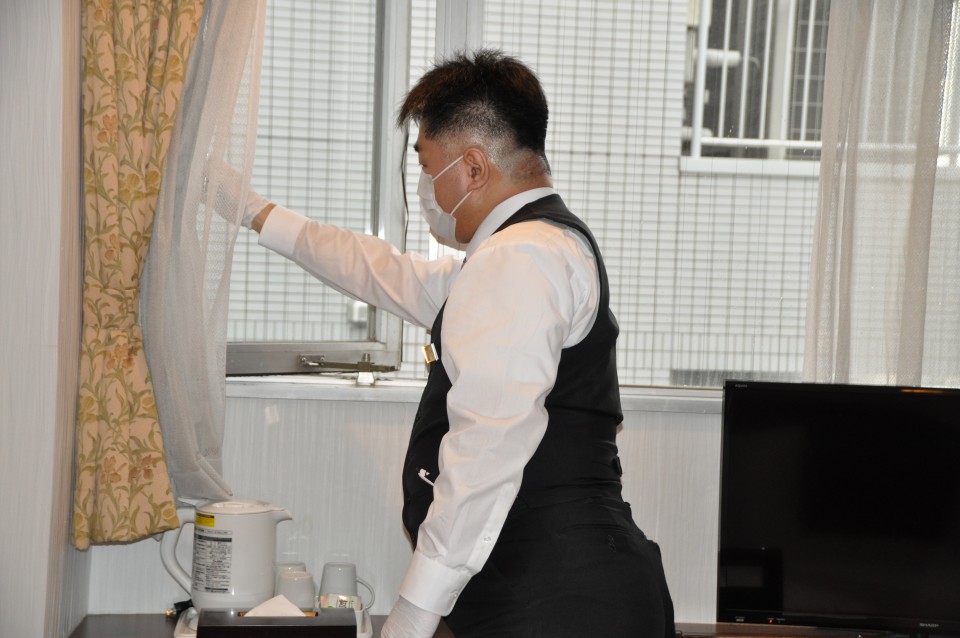 An employee at Oyo Hotel New Washington in Tokyo regularly ventilates air in guest room as a step to reduce risks of infections to new coronavirus. The photo was taken on July 27, 2020. (Kyodo)

Trip.com has launched various promotion services allowing flexible bookings of hotels and transportation. To put cash into hotels' hands, it has promoted a heavily discounted voucher scheme. If a purchaser ends up not making a reservation, he or she can get a full refund for the voucher.

The one-hour streaming succeeded in earning 3,600 bookings, equivalent to some 73 million yen ($690,000), with as many as 4,779 people watching the program at one time, according to Trip.com.

When a similar program on Japanese hotels and ryokan was streamed live to Chinese users at a later date, some 22,912 rooms were booked for a total of 26.19 million yuan ($3.75 million), in a sign of the persistent popularity of Japan as a tourism destination spot, Trip.com said.

In 2019, 9.59 million people visited Japan from China, accounting for a third of total inbound travelers.

"We can't wait to start traveling again, and exploring the wonders of the world, and what the world needs most right now is the freedom to travel on safely," said Trip.com Group CEO Jane Sun in a statement.

"With the measures for safety and flexibility we've announced, and these amazing deals and exciting new products on offer, that moment is now. It's time to travel on."

With the outlook for a recovery in foreign travelers uncertain, the government is pinning its hopes for the hard-hit tourism industry on an increase in domestic trip-takers, after launching a subsidy campaign called "Go To Travel" in July.

But the campaign was controversial from the start amid worries it could worsen the virus outbreak, and the government was forced to exclude Tokyo at the last minute due to a spike in new cases in the capital.

For Tokyoites who have been left out of the campaign, hotels in the capital are promoting special programs.

Hotel Chinzanso Tokyo has started to offer plans including free taxi rides to and from the hotel and in-room dining to allow Tokyo residents to relax with a change of scene while minimizing infection risks. Major hotel chain Prince Hotels Inc. also provides packages exclusive to Tokyoites with restaurant coupons.

Hotels and inns along with businesses serving food and drink are among the hardest hit by the pandemic, according to credit research firm Teikoku Databank. It said the number of bankruptcies in all sectors of the economy related to the coronavirus reached 400 as of Aug. 3.