Hong Kong has restarted discussions with Japan and a handful of other countries over setting up travel bubbles, commerce chief Edward Yau said Monday, given a mutually recognized coronavirus testing mechanism is established.

Addressing a webinar held by the Hong Kong Productivity Council on small business promotion amid the coronavirus pandemic, the Yau told the news media that Hong Kong has engaged in travel bubble discussions with between eight and 10 countries and places. 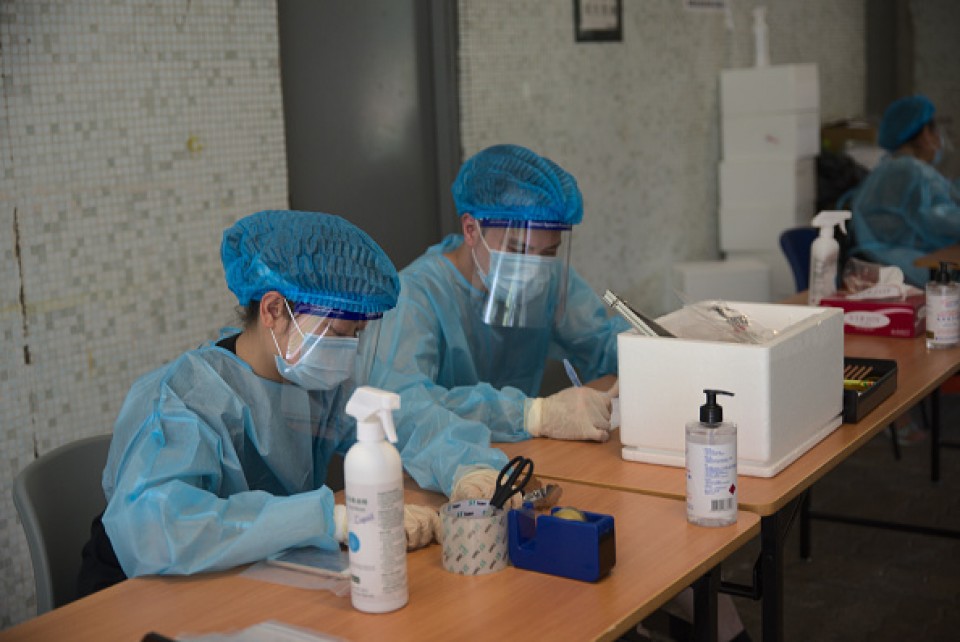 Health workers in Hong Kong, China, on August 12, 2020. (PHOTO NOT FOR SALE)(NurPhoto/Getty/Kyodo)

Discussions with Japan and Thailand, which had been suspended as the pandemic worsened in July, are in more advanced stages compared with other countries, Yau said.

"Travelers would take coronavirus tests that are mutually recognized, and the test results would be sent to the destination country via the flight companies for confirmation, before they were being allowed to board," Yau said, referring to the possible arrangement under discussion. "Once landed, the local health department could demand further testing."

But the bubble may not be set up anytime soon as all sides need to review the pandemic's development and situation, he added.

Foreign visitors have been banned from entering Hong Kong since March as the government put in place measures to fight the pandemic, while Hong Kong residents returning from foreign countries are subject to 14-day compulsory quarantine.

Arrival visitors dropped 99 percent in June year-on-year and are down 90 percent in the first half of this year from the same period of last year, tourism figures showed.

A 12-day run of 100-plus daily new cases was reported in mid-July as the third wave of the pandemic hit the city. But cases have dropped subsequently as nine were reported Monday, with the total tally reaching 4,691 and 77 deaths.