The largest antigovernment protest in years was held in Thailand on Sunday, with mostly college students calling for reform of the country's monarchy which has long been shielded from criticism under the strict lese majeste law.

Local media estimated between 20,000 and 30,000 people participated in the protest in the capital Bangkok, making it the largest such protest since 2014 when then army chief Prayut Chan-o-cha seized power in a coup. 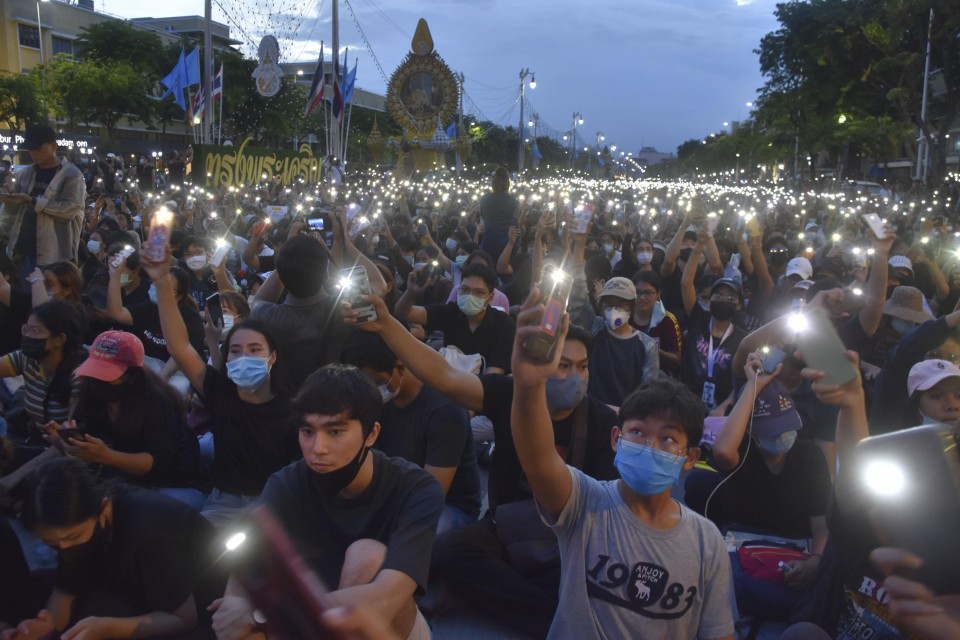 Demonstrators take part in an antigovernment protest in Bangkok on Aug. 16, 2020. (Kyodo)

Rallies drawing mostly young people have recently been held almost daily in Thailand, with participants calling for the resignation of Prayut, who has ruled the country as prime minister since the coup, as well as constitutional changes.

Human rights lawyer Arnon Nampa -- who is leading calls for monarchical reform, until recently a taboo subject in the country -- took the stage during Sunday's protest. As he called for the monarchy to cease interfering in politics, loud cheers broke out among participants.

During a rally at a university in Bangkok's suburbs on Aug. 10, participants compiled a 10-point monarchical reform plan that included calls for the abolition of the lese majeste law, a reduction in spending on the monarchy and the repealing of the right of the monarchy to publicly express political opinions.

Under the country's lese majeste law, defaming the monarchy is punishable by up to 15 years in prison.

King Maha Vajiralongkorn, who ascended the throne in 2016, is said to be spending most of his time in Germany.