Job offers to students set to graduate from universities and graduate schools next March fell 15.1 percent from a year earlier to 683,000 amid the coronavirus pandemic, logging the sharpest drop in a decade, a research institute said Thursday.

The estimated fall in job offers by private companies reflected moves by such major companies as ANA Holdings Inc., Japan Airlines Co. and H.I.S. Co. to suspend recruitment for new graduates in the coming spring. 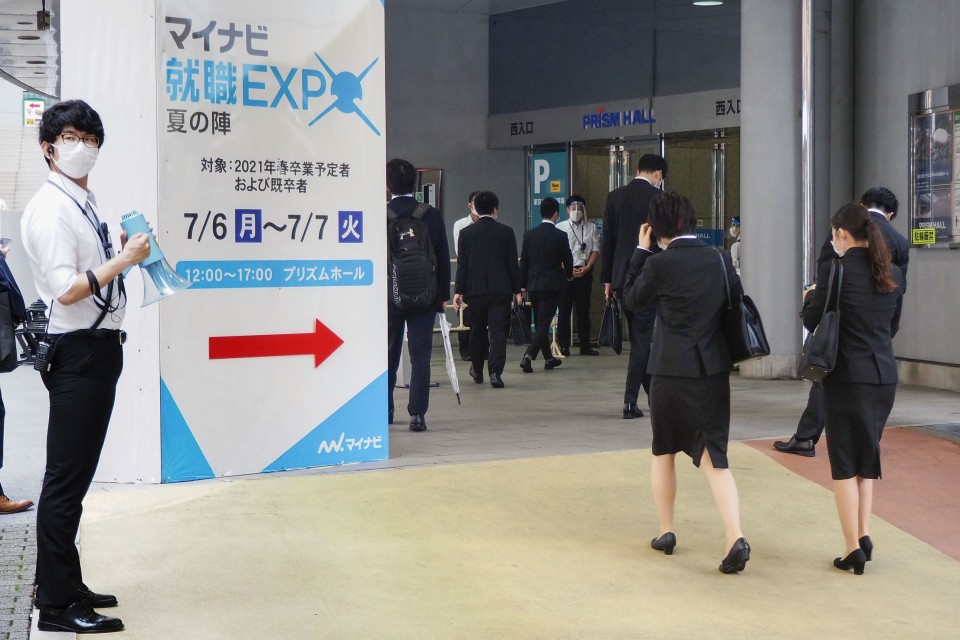 Job seekers head to a career fair hosted by Mynavi Corp. in Tokyo on July 7, 2020. (Kyodo)

The ratio of job offers to applicants worsened for the second year in a row to 1.53 from 1.83, the steepest fall since 2011, when the labor market was still reeling from the 2009 global financial crisis, according to the Recruit Works Institute, a research division of Recruit Holdings Co.

The number of job offers to new graduates had increased for five straight years through 2019 before falling this spring, but there were still 800,000 offers.

Recruit Works initially released the estimates for new graduates in 2021 in April but conducted an additional survey in June to assess the impact of the coronavirus spread, which forced the country to declare a state of emergency between April and May.

"The magnitude of the fall (in job offers) was not as bad as the downturns following the bursting of Japan's bubble economy (in the 1990s) and the (2009) global financial crisis," said Hiroyuki Motegi, an analyst at the Recruit Works Institute.

"Despite the virus pandemic, recruitment of fresh graduates maintained its relative firmness," he added.

The institute's initial survey drew responses from 2,479 job-seeking students and 4,481 companies with five or more employees, of which 3,733 responded to the extra survey in June.