The U.S. government said Wednesday that it has blacklisted some Chinese firms and imposed visa restrictions on company executives involved in asserting Beijing's claims in the South China Sea, a move likely to fuel further bilateral tension over the disputed waters.

The actions were taken after the United States in July toughened its policy on the South China Sea, which is contested by China and several Southeast Asian nations, calling Beijing's claims to offshore resources across most of the waters "completely unlawful." 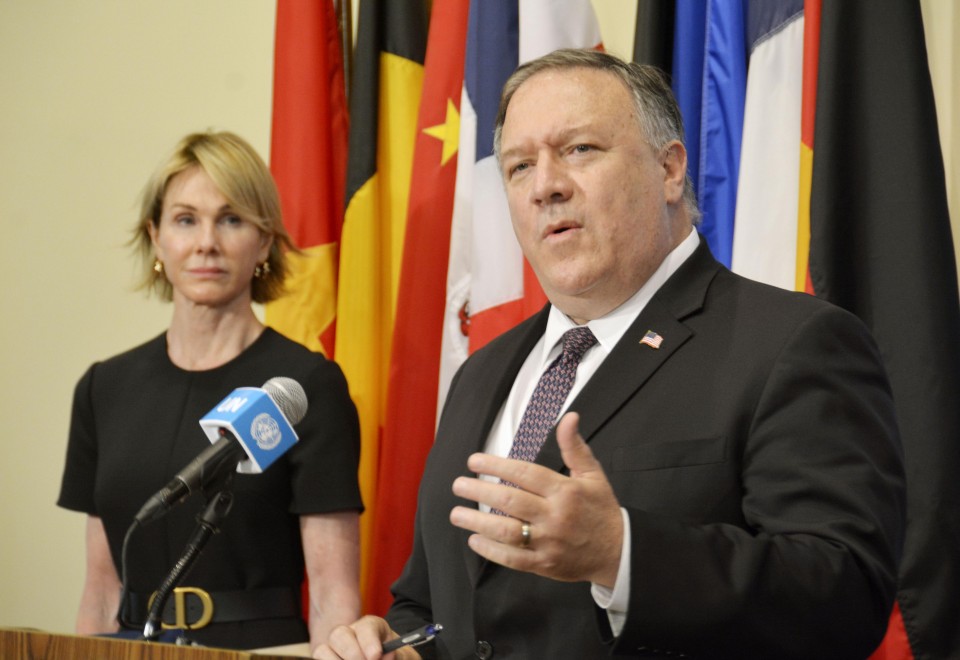 "The United States will act until we see Beijing discontinue its coercive behavior in the South China Sea, and we will continue to stand with allies and partners in resisting this destabilizing activity," Secretary of State Mike Pompeo said in a statement.

The visa restriction targets individuals responsible for, or complicit in, the reclamation and militarization of disputed outposts in the South China Sea, as well as those involved in "coercion" by China against Southeast Asian claimants to inhibit their access to offshore resources, he said.

Such individuals will be inadmissible to the United States, and their immediate family members may also be subject to the visa restrictions.

Dozens of individuals have already been deemed ineligible for visas under the new measure, which took effect in the morning, a senior government official said.

The Commerce Department also said Wednesday that it has added 24 Chinese state-owned enterprises to its economic blacklist for their role in helping China reclaim and militarize disputed outposts in the South China Sea, including several subsidiaries of China Communications Construction Co.

According to the U.S. government, China has used its state-owned enterprises to dredge and reclaim more than 12 square kilometers in the South China Sea, with China Communications Construction playing a key role.

The company is also one of the leading contractors used by Beijing in its Belt and Road Initiative, the U.S. government said. The initiative is a massive cross-border infrastructure project critics say is intended to draw countries deeper into Beijing's economic orbit.

The Chinese government must not be allowed to use China Communications Construction and other state-owned enterprises as "weapons to impose an expansionist agenda," Pompeo said.

Relations between the United States and China have been increasingly deteriorating over the past months, with their standoff deepening over several security and economic matters including Hong Kong and Taiwan, as President Donald Trump takes a tougher stance on the Asian country to appeal to U.S. voters ahead of the November presidential election.

Beijing has overlapping territorial claims with Brunei, Malaysia, the Philippines, Vietnam and Taiwan in the South China Sea.

Meanwhile, China launched two ballistic missiles, including an "aircraft-carrier killer," into the South China Sea on Wednesday morning, sending a warning to the United States, The South China Morning Post reported, citing a source close to the Chinese military.

The move came a day after a U.S. spy plane reportedly entered a no-fly zone without permission during a Chinese live-fire naval drill off its north coast.

The latter, which has a range of 4,000 km, is capable of reaching Guam, a U.S. territory where thousands of American troops are stationed.