The Japanese and Myanmar foreign ministers agreed Monday to reopen borders for expatriates and other long-term residents as soon as early September, relaxing travel restrictions that were imposed to stem the spread of the new coronavirus pandemic.

Foreign Minister Toshimitsu Motegi and Myanmar leader Aung San Suu Kyi also confirmed at their meeting in Naypyidaw they will speed up talks to realize short-term business travel, while taking measures to combat coronavirus, according to the Japanese Foreign Ministry. 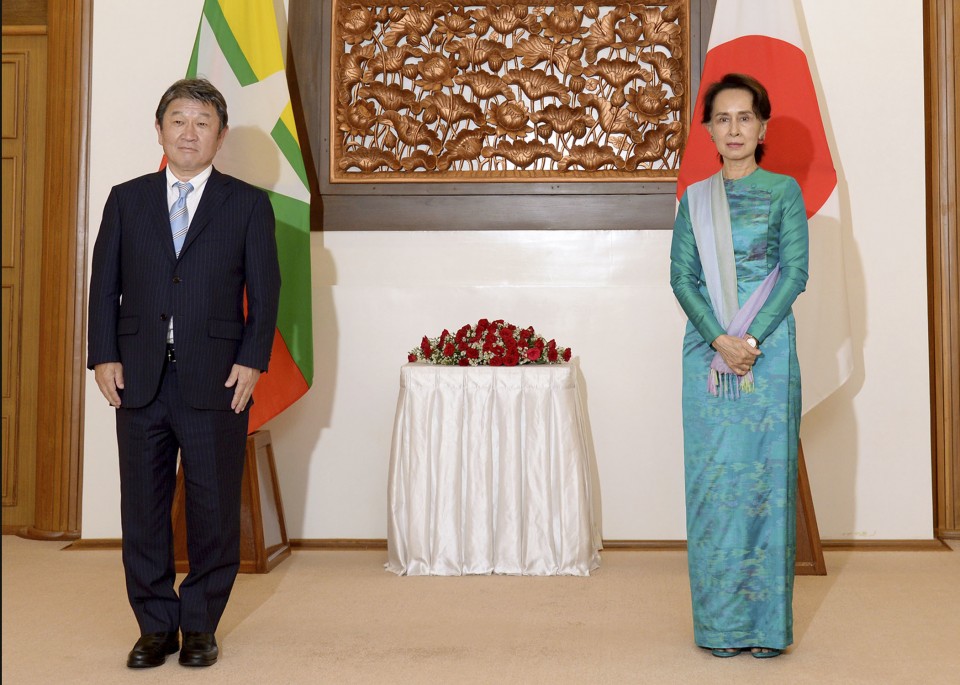 Motegi, in his final stop of the four-nation tour since Thursday, told reporters online that his country's pledges of economic and medical support to leaders in the respective countries demonstrate that "Japan leads international cooperation efforts" in fighting the pandemic.

The visits to the countries came as Tokyo, which currently bans in principle entries by foreign nationals from 146 countries and regions, launched talks with 16 economies, including Myanmar, to resume travel in tandem with the restart of domestic socioeconomic activities.

Besides Myanmar, Japan agreed with Cambodia and Laos over the weekend and with Singapore and Malaysia earlier this month to allow reciprocal travel of long-term residents as early as September.

Under the arrangements, long-term residents are allowed to travel on condition they stay at home or at a designated place for 14 days after arriving and take steps to reduce the risk of infection.

At the talks with Suu Kyi, Motegi also pledged loans of 30 billion yen ($283 million) to the Myanmar government as emergency budget support and 15 billion yen to support small and medium-sized firms amid the economic downturn caused by the coronavirus pandemic, the ministry said.

The fresh provisions came on top of coronavirus-related aid worth over $30 million that Japan has administered to Myanmar, including the provision of medical supplies such as the antiviral drug Avigan, a potential coronavirus treatment drug manufactured by a unit of Fujifilm Holdings Corp., it said.

Motegi also said to reporters, "The leaders and I shared an understanding over the South China Sea issue," referring to the maritime areas, where tensions are high amid China's rising military assertiveness. He did not elaborate further.

The foreign minister added he "gained their understanding and support for a free and open Indo-Pacific (region) that Japan is actively promoting to realize."

In the meeting, Motegi also noted the importance of Myanmar "steadily implementing" the provisional order issued by the International Court of Justice in January requiring it to take "all measures" to end the persecution of the country's Rohingya ethnic minority by the Myanmar military, the ministry said.

Regarding the issue, Motegi told reporters he spoke to Suu Kyi about Japan's continuing support for Myanmar's efforts to improve the situation in the Rakhine State, from which Rohingya Muslims have fled to take refuge in neighboring Bangladesh. He said Suu Kyi responded by saying she will make efforts to do so as much as possible.

More than 740,000 Rohingya Muslims have fled from the western Myanmar state to Bangladesh since 2017 in the wake of a brutal crackdown against insurgents by Myanmar's armed forces. Their return to their native state remains slow amid concerns of violence.

Motegi also stated Japan's "full-fledged support" for Myanmar's democratic nation building, and an election observer mission is set to be dispatched to the Nov. 8 general election in Myanmar, the ministry said.